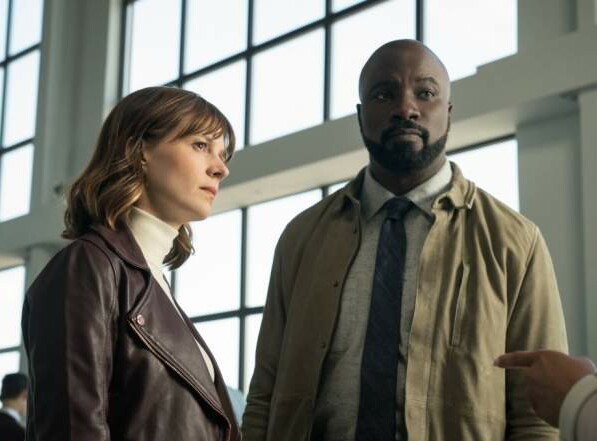 CBS’s Evil , created by Michelle and Robert King, the duo that brought us both The Good Wifeand The Good Fight, asks the question, Is there a rational explanation for everything, or is there sometimes something otherworldly at work?  (It feels as though The Good Fight, on CBS All Access, often asks that same question as it explores the issues thrashing Trump’s America.  But I digress.)  It's yet another take on the procedural crime drama that CBS does so well, but with one devil of a twist.

Starring Katja Herbers (Westworld) as clinical psychologist/skeptic Dr. Kristen Bouchard, and Mike Colter (Luke Cage) as priest-in-training/believer David Acosta, Evil follows these two as they investigate incidents that could either have some supernatural cause (i.e. a demon possessing a man and using him to commit a murder) or a more scientifically plausible one (i.e. that man just likes murdering people, and his demonic possession was just a ruse).  Like a completely different show with a slightly similar approach to its storytelling (CBS’s God Friended Me), this series exists right on top of the line that separates total adherence to either ideology.  In other words, Evil works best when it neither proves nor disproves either side.  (Herbers and Colter are pictured at top.)

The first episode rides that line pretty well.  Bouchard, an obviously skilled clinical psychologist, works for the DA’s office, mainly to prove that defendants on the stand, whomever they are, aren’t insane or possessed or anything else.  They’re just lying.  Acosta is an assessor for the Vatican, and he has been charged with the task of determining if any of the thousands of backlogged, supposedly supernatural incidents they’ve been informed about are actual demonic occurrences, real life miracles, or something else.

Bouchard is many things:  a clinical psychologist, an ex-mountain climber, a kind-of single mom.  (She’s not divorced, but apparently her husband is off mountain climbing while she raises their kids.)  In the first episode we learn that she has admitted to missing the freedom she had before she had her daughters.  The first time we see her go home, she just sits in her car for a moment.  It’s a quick moment, honestly, but it was still just long enough for me to pick up on what she was doing.  Bouchard was psyching herself up before having to deal with her four (yes, four) adorable, yet loud and energetic, baby girls.

I love the dynamic between Bouchard and Acosta, who are very much opposites in the tradition of The X-Files’ Scully and Mulder, caught in the whole science vs. supernatural thing but always respectful of each other.  Just because people see things differently doesn’t mean they can’t work together and work toward common goals, does it?  (Whoops.  Digressing again.)  Too often, both in real life and on television, people’s personal beliefs are scoffed at, disregarded and intentionally disrespected.  These days it seems like most people think there’s no way to disagree with something someone else believes, even if they find that belief to be silly, without stomping on it.  Bouchard, however, is open-minded.  She politely makes it clear to Acosta that she’s not a believer, which works for him.

“You don’t care that I don’t believe?” she asks.

Sure, this mutual respect could be mistaken for professional courtesy, theoretically freeing civilians from the responsibility of a similar level of decency, but I’d argue this is how people should deal with one another.  Either way, thumbs up.

Besides all that, I suspect Evil’s big baddie will turn out to be none other than one Leland Townsend, played by the fabulous Michael Emerson of Lost and Person of Interest.  Townsend is apparently an old nemesis of Acosta’s, and now Bouchard’s foe by association, and even though the jury will undoubtedly remain out over whether he’s definitely a demon or just your run-of-the-mill psycho, I’m certain that either way he will regularly show up ready to throw a monkey wrench into whatever our heroes happen to be trying to accomplish.

Overall this production is very well executed, but that was pretty much a given, considering who’s got the reigns here.  The Kings have made sure that the music perfectly supports the tone of the show, and the visuals (from the color grading, to the framing, to the general movement of the camera) all really help the viewer understand how Bouchard is feeling.  I know technically this series is supposed to be about three people -- Bouchard, Acosta and Acosta’s other partner, a contractor/non-believer named Ben (Aasif Mandvi) -- but let’s get real.  This is all about Bouchard.

I’m anxious to know her better.