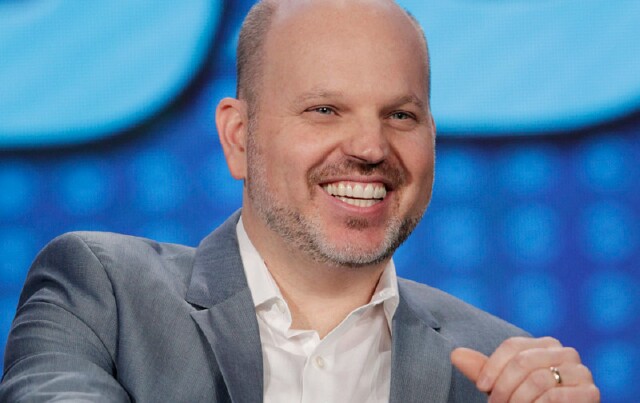 Pasadena, CA – New CBS Entertainment President Glenn Geller yesterday made his first appearance on the Television Critics Association stage – and his proved to be one of the smoothest and most personal tour debuts by a television executive in memory.

“Good morning.  My name is Glenn Geller, and, yes, I am the new guy,” he calmly began. “Since this is my first TCA presentation, fingers crossed that it goes well.  But if it doesn't, I'll just wait for the L+3s to come in, and I'll get back to you next week.

“I'm a big fan of reality, both as a viewer and a programmer,” he continued. “‘Survivor’ and ‘Big Brother’ are appointment TV for me and my husband, and I have plans for more reality at CBS.  But I couldn't be more passionate about our scripted shows.” He cited the network’s "Mom" and "Madam Secretary" as favorites, along with “Blue Bloods,” largely because of its “heart and values.”

It’s been a while since we’ve heard much about CBS’s Friday night powerhouse at a TCA tour, an oversight Geller was quick to correct. “You may not think it's a sexy show, but in season six ‘Blue Bloods’ has more viewers every week than any scripted show on any other broadcast network, outside of [Fox’s] ‘Empire,’” he said. “I think 14 million viewers [is] actually pretty damn sexy.”

There has been much talk at this tour about all the ways people are watching programming and all of the competition that television continues to face, but Geller quickly and assuredly cut through the clutter of it all. “When you factor in all forms of playback, more people are watching CBS shows than 15 years ago,” he said. “We are well on our way to becoming America's most watched network for the 13th time in 14 years.  We have the only two entertainment shows on TV that are watched by more than 20 million viewers: ‘The Big Bang Theory’ and ‘NCIS.’ And we have 17 series that are watched by 10 million viewers or more. This includes three sophomore series and all four of our new fall shows.

“I know we've said this before, and it's worth repeating. CBS's ability to build a big audience distinguishes our brand in all parts of our business, to advertisers on the network, to distributors for carriage agreements and to those who license our shows in syndication and around the world. On the advertising side, we saw the marketplace turn around in the third quarter of 2015.  It gained strength in the fourth quarter, and it's currently very strong in the first quarter of 2016.  Historically, a series of strong quarters and scatter leads to a robust Upfront in May. [That’s] great news as we get ready for this year's presentation at Carnegie Hall.”

Asked about his plans to add more reality to CBS’ schedule, Geller revealed that he thinks the network’s “next big reality hit” will be the upcoming “Hunted.” “It was the first buy for me as the entertainment president,” he exclaimed. “It is a straight‑to‑series order based on a U.K. format. Essentially it's teams of two people -- regular people like you and me – [who] go on the run and are hunted by real-life professional law enforcement.” If the teams outlast the hunters they win $100,000.

“What I love about this show is it essentially brings the procedural element that we've been showing our audiences every year into the reality space,” he said.

Geller gave one of the most thoughtful answers any executive has given to any question at any recent TCA tour when the omnipresent topic of diversity (or a lack thereof) came up during his session. The critic who asked the question took CBS to task for continuing “to lag in this department” while the other broadcasters are making significant strides. (That critic, and many others who continually complain about what they believe to be an alarming lack of diversity on broadcast television, ought to look at broadcast schedules from ten or 20 years back. The differences between then and now are striking.)

What steps will Geller take toward remedying the situation, the critic wanted to know.

“I'm glad you asked the question,” Geller replied. “You know, I'm diverse.  I fall into the LGBTQ category. I mentioned my husband earlier and I talk about him publicly because I want to normalize my diversity. CBS will always reflect what America looks like, and it's always evolving and changing.  I'm just a gay guy from Indiana who doesn't play basketball, but now I'm the Entertainment President of CBS.  There is diversity at CBS, and it exists in front of the camera. It exists behind the camera. It exists in our offices. Can we do better?  I think we are; on this stage later today you are going to see two of the most diverse casts we have on CBS, and those are new shows, and I'm very proud of that.” (Those shows are “Criminal Minds: Beyond Borders” and “Rush Hour.”)

When another critic kept the diversity questions coming, asking what specific steps Geller would be taking in that area, he replied, “We have a lot of new series in development … that are targeted to have full African-American or Latino casts. We're not casting color-blind. We're casting color-conscious. It's not the best actor wins. It's the right roles for diversity, and those are the kind of shows we're going to be putting on the air.”