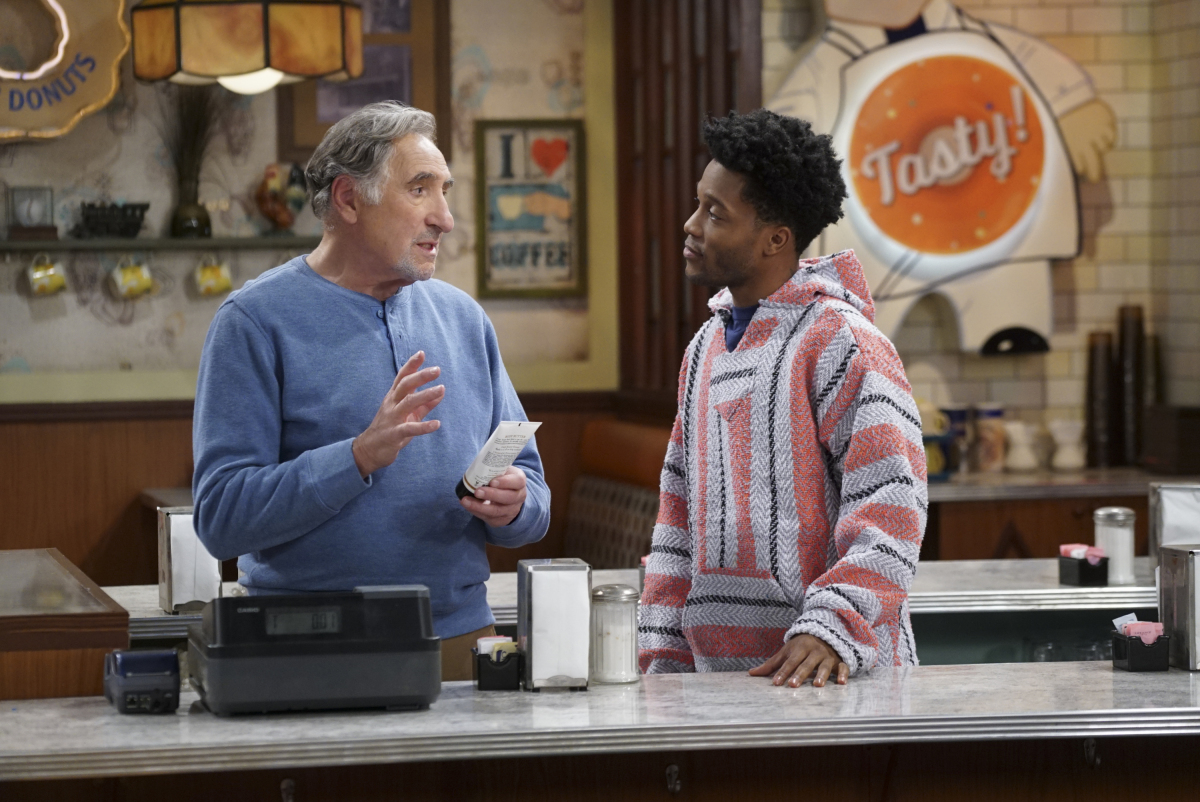 I haven’t been a huge fan of multi-camera comedies for a while. Most of my favorites came out in the Nineties, and I’ve since traded them in for the cleaner, basic cable-y look of their more recent single-camera siblings. CBS’ Superior Donuts utilizes this classic look and sitcom formula, but breathes new life into the genre through the infusion of current events-related social commentary, helped along by a few familiar faces.

Based on a play by Tracy Letts,Superior Donuts stars the incomparable Judd Hirsch and rising star Jermaine Fowler as Arthur Pryzbyszewski and Franco Wicks, respectively. The former is the old fashioned proprietor of the local neighborhood donut shop for which the show is named, and the latter is his newest hire -- a young black man whose outlook on life is a little more up to date. (Hirsch and Fowler are pictured at top.)

The roster of supporting characters has its fair share of heavy hitters as well. David Koechner (Anchorman) plays a patron named Carl "Tush" Tushinski who lives life gig-to-gig via a fax machine he lugs around. Katey Sagal (Sons of Anarchyand about 1,000 other cool shows) plays a Chicago beat cop named Randy DeLuca who spends a decent amount of time in the shop both on and off duty. Comedian Maz Jobrani who plays the money hungry Fawz, a local business owner and landlord in the Chicago neighborhood that drops some of the best punch lines in all of the dialogue.

The characters also include DeLuca’s rookie partner James Jordan (Darien Sills-Evans), Franco’s best friend Sweatpants (Rell Battle) and Maya (Anna Baryshnikov), a not-so-urban Millennial who happens to spend a lot of time in the shop. (Fowler, Sills-Evans and Sagal are pictured below, left to right.) 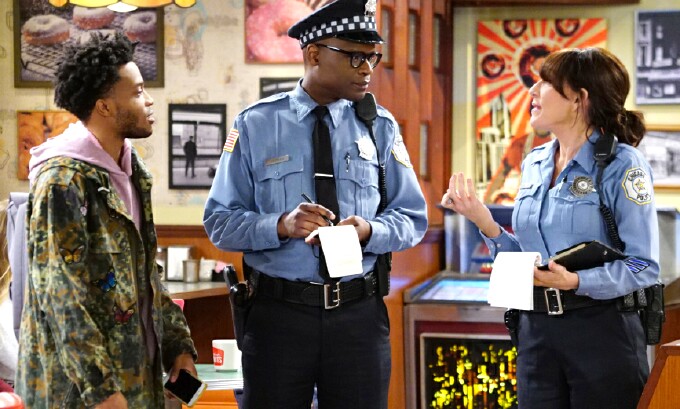 When the series began, the show peddled the usual sitcom wares. It had a sort of Odd Couple-like dynamic, with Arthur being a bit stuck in his ways almost to the point of accepting his shop’s demise in the face of corporate competition from franchise coffee shops popping up due the gentrification of his neighborhood, and Franco being the enthusiastic idealist with a knack for the arts and a shared disdain for the changes in his neighborhood and how they affected the poor, who are the community’s true inhabitants.

After some head-butting, ass-covering and lesson-learning, the two seemed to have found themselves on the same side of something, though their differences of opinion, and Franco’s youthful antics, ultimately became the focal point of pretty much every episode -- or so it seemed. Upon closer inspection it becomes obvious that Superior’s true journey is the one towards empathy and trust, with its true message being that no one is superior, regardless of whether he or she is a cop, shop owner, Middle Eastern business man or young black man coming up in a rough neighborhood.

That message of equality is driven home even further by the upcoming episode The Amazing Racists (to be telecast March 13 at 9 p.m. ET). The episode revolves around the racial profiling of Franco during a “routine” stop-and-frisk by an Asian police officer. We’ve all seen these types of episodes before, especially when Nineties sitcoms featuring people of color are taken into consideration. Go even further back to classic shows like All in the Family, The Jeffersons and Good Times -- the Norman Lear comedies of the Seventies that started it all -- and it becomes increasingly apparent that we’ve been down this road in some way, shape, or form over and over again.

Social injustice is something that most Americans are familiar with in some capacity, and given our current political climate, taking on this material is risqué at best, and even then is arguably not worth the risk for some show-runners. To that end, Superior Donuts doesn’t fumble, running the ball straight into the metaphorical end zone with a considerable amount of grace and purpose. Remember The Wayans Bros? Shawn and Marlon would have approached this sort of issue with all the poise of Def Comedy-era comedians -- and the result would’ve been much more polarizing.

Superior, on the other hand, managed to navigate these waters in a way that didn’t leave me feeling offended or preached-to (which was a pleasant surprise).

This isn’t the first time this show has dealt with the issues of race and perception. In its short run to date it has tackled, mostly through comic-relief, the way police see young black men, the way an influx of hipsters can ruin almost any neighborhood and the way protesting and personal harassment are on opposite sides of the same thin line. I also believe Maya’s presence is a representation of young white privilege. She is intelligent, idealistic and almost hyper-aware of the social climate, although it has yet to be revealed that she’s ever actually been in the same boat as the people these issues really affect (like Franco or Sweatpants).

All in all, Superior Donutshas exceeded my expectations in more ways than one. It has a super diverse cast (although it’s missing a Latino) that above all else makes me laugh, and it has the proper players in place for those serious moments when the pendulum inevitably swings the other way. Creators Bob Daily, Garrett Donovan and Neil Goldman have finally found a way to make me want to watch a multi-camera sitcom again, and you know what? I’m not mad at it.

Superior Donuts is telecast Mondays at 9 p.m. ET on CBS.