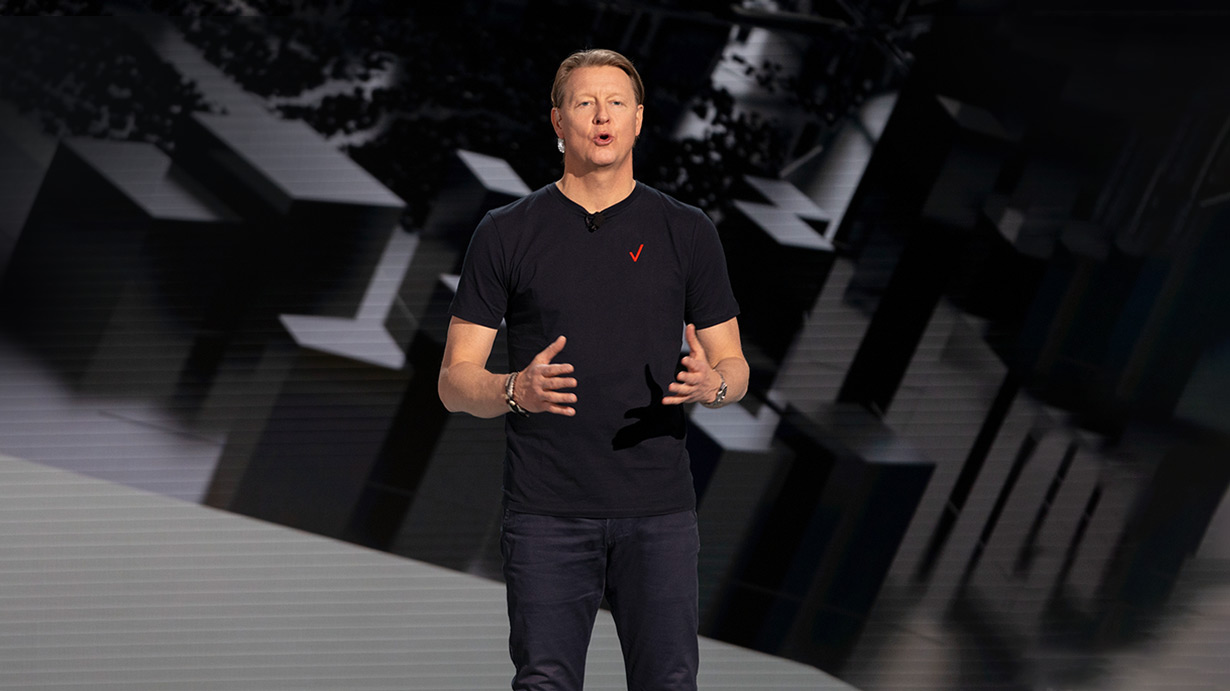 The opening keynote address is one of the most prestigious speaking engagements in the tech world, and possibly business overall. It isn't unusual to have to arrive 3-4 hours early and stand in a long winding line, snaking down multiple floors of the Venetian Hotel Conference area to attend. Most years, the main ballroom at the Venetian is filled to capacity with throngs of press and tech geeks clamoring to hear every word about the next evolution of the digital transformation. For those who are not lucky enough to actually get in the room, overflow rooms are set up where you may watch the keynote on video screens. Last night, as Verizon CEO Hans Vestberg delivered a dynamic, powerful and optimistic speech, entirely about the 5G world, there was no live audience. Everyone was watching on screens.

He outlined the key "currencies" that 5G delivers:

The keynote put the spotlight on several partners and use-cases of 5G that demonstrate the power of super-fast speeds and low-latency/EDGE computing.

The NFL has partnered with Verizon to install 5G into 28 NFL Stadiums in 2021 and it has already installed 5G at Tampa Bay's Raymond James Stadium, the site of this year's Super Bowl. 5G in-stadium serves a dual purpose in both giving fans a better experience to engage with the game while attending, but also gives coaches faster access to critical data and stats as well as next level visualizations. Pro Football Hall of Famer, Deion Sanders, joined Vestberg on stage, to discuss the innovations that Verizon has brought to the fan experience, including the NFL SuperStadium app which allows 5G viewers to choose from seven camera angles to view a game.

Verizon announced a partnership with the Smithsonian Institute to support its race, community, and shared future initiative which explores how Americans currently understand, experience, and confront race and what that means for the future. Verizon has been working with the Smithsonian to digitally render into 3D images, viewable in AR and VR, from several collections including the National Museum of American History's exhibit "Girlhood. It's Complicated" and "Pleibol" an exhibit focused on how the Latin American community played and changed the game of baseball.

Additionally, Verizon has been working closely with the Metropolitan Museum of Art to digitize many of its priceless collection and has created three 3D simulated environments to be able to explore in the Met Unframed AR app.

During the keynote, Verizon also announced that it will be outfitting 100 schools with 5G. Additionally, they announced that they would be launching 5G into 15 iconic Live Nation concert venues in anticipation of the return of live concerts post-COVID.

Overall, the keynote seemed to strike an energetic, optimistic note. However, as a last demonstration, Vestberg brought on the Austin-based psychedelic soul band, Black Pumas for a mini-concert where viewers were invited to scan an on-screen QR code that would open an app on their phone to trigger an AR view of the concert on any home clear surface, like a wall. It was noted on social media (and by my own experience) that while the QR code trigger worked, the subsequent AR experience was spotty and crashed, leaving a somewhat skeptical take on a visionary and enthusiastic keynote.