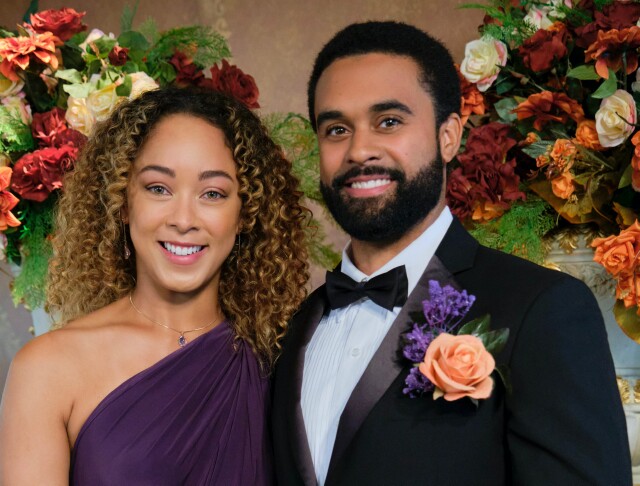 Chaley Rose makes a welcomed return to Hallmark Channel this week in the romance-driven My Best Friend’s Bouquet. Hallmarkies last saw the former Nashville star in 2019’s Christmas Duet  (opposite Rome Flynn) and after months of lockdown, to say she was elated to be on a set and working again is an understatement, although she did have to quarantine. “I think Hallmark had done a couple of movies before [we] got there,” she explained during an exclusive interview with MediaVillage. “I flew to Vancouver in July, quarantined for two weeks, and we shot for the last two weeks of July into the first week of August. So yeah, this was one of the first [movies] back up.

“British Columbia handles COVID very well,” she continued. “Their infection rate is super-low, so the first week we shot in and around Vancouver, then for the next two weeks, we were all relocated to the same hotel in Harrison. It’s gorgeous, with hot springs and a lake, and mountains. We got to do normal things again, and all had so much fun. A lot of what you see in the movie is we really did all just fall in love with each other. There was one pub in the town, and they gave us the backroom to take over, and as someone entered we’d clap for them. As the crowd grew, so did the applause. It was so funny! I love everybody I worked with, so that really brightened the year for me.”

Shooting the film not only gave Rose a much-needed dose of normalcy (amidst stringent COVID safety measures), it provided her the opportunity of working with a diverse ensemble cast, something that excited the activist in her. “At first, when my agent called me about it, I had a lot of hesitation,” she shared. “Especially this year with the climate of things, I’ve been very outspoken about Black Lives Matter, gender equality, and LGBTQ+ rights and quality, so there was some hesitation going into this. At one point I said, ‘We need an Asian character’ because basically, I wasn’t going to be happy doing this if I'm the only person of color in a cast of six.

“But [Hallmark] was way ahead of me on that,” she added. “I was pleasantly surprised when I started talking to production and they were like, ‘Here's your cast.’ It made me so very happy to be a part of it because there is a shift at Hallmark and a statement that they're making. I’m really honored to be a part of that.”

In the film, Rose portrays Josie Hughes, a single hopeless romantic with a deep-set belief in the “power of the bouquet” and that the one who catches it at a wedding is destined next to be married. So, when she does exactly that at the wedding of her friend Emma (Luisa d’Oliveira), her life is upended. Believing it’s the bouquet, she goes from single to dating eligible bachelor Will (Jaime M. Callica), and while she thinks he’s Mr. Right, she’s is blind to the fact her best friend Alex (Nathan Witte,  pictured at top with Rose) has been carrying a torch for her for years.

Having two handsome leads was another bonus for the actress. “Both actors were different in their own ways,” she explained. “So that played into playing against both of them. Nathan is not unlike his character; he's a lovely, warm kind of hippy-dippy guy, great to have around. If anything, I broke a lot from laughing at him. Jamie is a lot like his character. He's very prepared, very easy to act with and he comes with it all thought out, a lot like the character he played. It felt real being pursued by two very different people, which I was, but they played them very well.”

Rose said she’s never been in the position of having a male friend fall for her, and while she doesn’t believe in “the power of the bouquet,” she’s been known to be cautious about catching one. “I am literally taking a step to the left to avoid maybe catching the bouquet,” she laughed. “There was a time in my life where I was not really interested and I’d let all the other ladies fight for it. While I don’t really believe in the lure of the bouquet, I'm obviously superstitious enough to have avoided it. But I wouldn’t mind catching one now -- if we ever get to go to weddings again!”

With two Hallmark projects now in her credits, she’s hopeful for more. And while her career seems to have skyrocketed since first booking Nashville, she admits it hasn’t always been a bed of roses. “I cherish that experience, but after Nashville, I had two years where I did a couple of guest spots, and then [went] 23 months without a job,” she revealed. “I booked a pilot, and after the fact, the director asked me to do nudity. It was very inappropriate. I said, ‘No’ and was fired. So, there were 23 three months of auditioning. In all honesty, I’ve had a faster trajectory than some of my peers, and for that, I'm very grateful.”

She’s also grateful for the support of the Hallmarkies who’ve enjoyed her work. “Occasionally, one might not be a big fan of what I have to say about stuff,” she said in closing. “But that's okay and to be expected. For the most part, what I've really seen is people of color who are so grateful to see black characters on Hallmark! 99.9% of the feedback I get is from people who are happy to see me there and enjoyed Christmas Duet. So yeah, it’s lovely to be welcomed by the Hallmarkies.”

My Best Friend’s Bouquet will be telecast Saturday, October 10 at 9 p.m. on Hallmark Channel as a part of the network’s annual Fall Harvest programming event.