By Steve Gidlow April 17, 2020 Behind the Scenes in Hollywood Archives 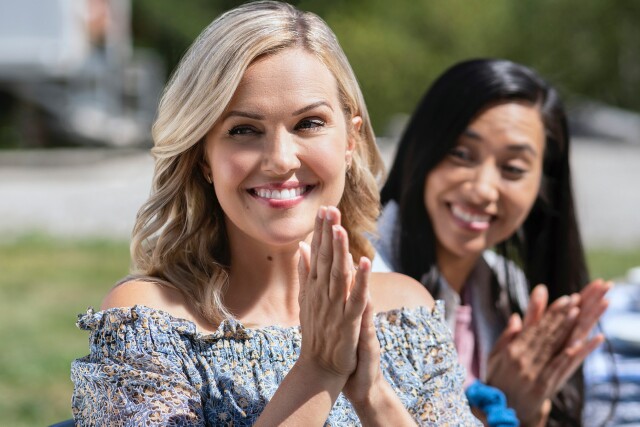 Nature of Love will be telecast Saturday, April 18 at 9 p.m. on Hallmark Channel as part of its annual Spring Fling programming event.

Emilie Ullerup (pictured at top) of Chesapeake Shores returns to Hallmark Channel this weekend in the movie Nature of Love, co-starring Christopher Russell. In the charming rom-com, Ullerup stars as city girl Katie Ryan, a would-be lifestyle writer desperate for that first big assignment. For Ullerup, who became a new mom in January, shooting the movie's adventure scenes last August while four months pregnant wasn't exactly ideal. "It's an adventure movie. Of all the movies to be filming while I was pregnant!" she laughed during an exclusive interview with MediaVillage. "It probably wasn't the best one to do while I was newly pregnant and not feeling super-duper.

"It took a lot from [production] to hide my pregnancy," she continued. "But I'd worked with the crew previously and they are awesome. In the first draft of the script, they had me rock climbing and all these crazy things. But they did say if I wanted to do [the film] they'd adjust things and get a body double, so it wasn't as crazy. Every wide shot you see in the movie is not me and all of the adventure stuff, also not me. It's just movie magic at its best."

Katie's big chance comes in the form of documenting a fish-out-of-water experience by taking a "glamping" trip. When her tent comes complete with a butler/pastry chef, electricity, a bathtub and a ruggedly handsome wilderness guide in cowboy Will Martin (Russell), the assignment takes a turn for the better. But when her editor switches the focus of the piece to being all about Will, getting the press-shy mountain man to participate is another story.

Ullerup was a novice to "glamping" before making this movie. "I was familiar with the term, but I've never actually attempted it," she said. However, once she saw the movie's location, she quickly became a convert. "I wish I had, and now I will have to," she admitted. "It was so spectacular. I think I'd do better at glamping than regular camping.

"We lost every location we had booked during filming, so they were [constantly] scrambling to find new locations yet managed to pull it off," she continued. "We were in Squamish, British Columbia, in the mountains, and the weather just happened to be perfect. The whole thing was unreal. It wasn't even a real glamping resort. They built everything; we had amazing set decorators and designers. I told them if they could please ship [the tent they built] to my home, I would set it up in my backyard. It would be nice to have a hunky wilderness guide, too, but I'm not sure how my husband would feel about that." 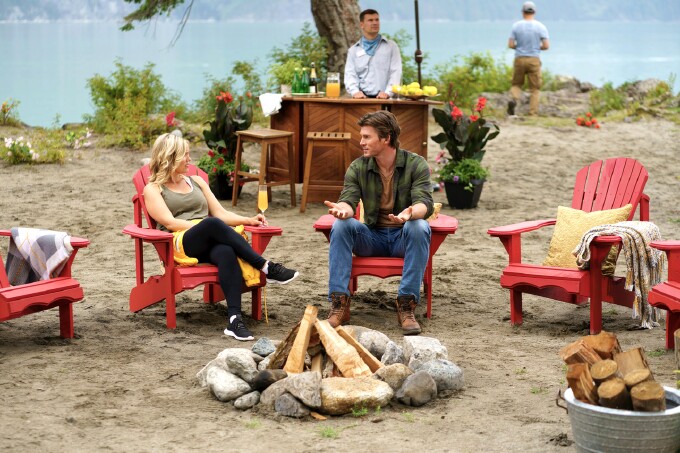 Having Russel as a co-star became another perk to the job. "I always do my research," she shared. "When I found out Chris was playing opposite me, my husband and I looked him up and we were both like, 'That is probably the most beautiful man we've ever seen.' My husband was an actor, so he gets it, and that makes it nice.  Does he love the scenes where I kiss other men? No, they're not his favorite but he's pretty cool with it all.  Chris and I had about three days to get to know each other before we had to kiss. It's weird when you have to do it on day one -- it's like, 'Nice to meet you, let's do this.'"

As Ullerup adjusts to life as a new mom, and the challenges from the Coronavirus pandemic, she tells me it's all one day a time. "Being new parents, we've been kind of self-isolating just because we have a newborn," she shared. "It does feel like we've been in our home forever, so [isolating] wasn't that big of an adjustment as we've been living in a baby bubble since January. Now it's more about the paranoia of not wanting to get sick [while] having a newborn, so we're just trying to keep calm and stay in. It's all we can do."

Still, she's happy to be able to provide a little light and an escape courtesy of Hallmark and Nature of Love while reminding viewers of the beauty of the world that is still out there. "In between takes I'd sit and look over the river," she recalled. "It was magical. I was just out of my first trimester and feeling awful, which made it feel like less of a vacation, but it was wonderful.

"When we aren't tending to the baby, we are also escaping in any way we can via TV," she added in closing. "It's cool to know people can do that with this movie and that makes it special. I hope this doesn't last too much longer, and when things get back to normal, we're all hoping to start filming season five of Chesapeake Shores. Nothing's been announced, but we're optimistic about that, and hopefully, it will happen."