"Cinema" It's Just Another Word for Resilience 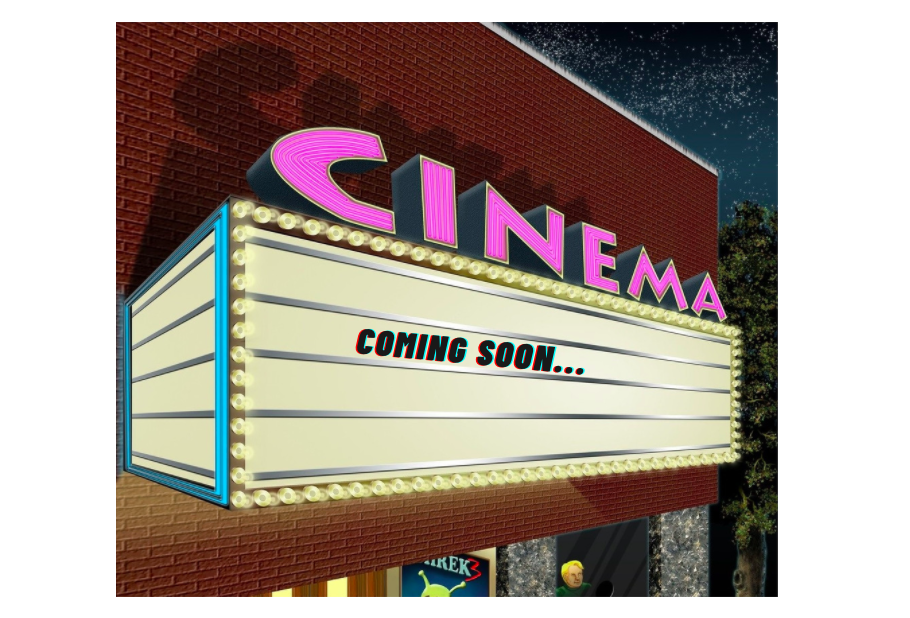 Register here for the long-awaited Jack Myers Leadership Conversation with NCM's Cliff Marks and Regal's Ken Thewes. If the messaging below looks dated, yet peculiarly apropos, that's because it is something you would have seen 100+ years ago during the pre-dawn talking picture era inside your local neighborhood "movie house". In September 1918, the U.S. saw the spread of a deadly respiratory ailment, similar to COVID-19, that lasted into early 1919 and took the lives of some 675,000 Americans. Movie theaters from Minneapolis to Los Angeles were closed down for approximately 2 months, with various U.S. cities and towns challenging local ordinances that shuttered their doors, encouraged the wearing of "influenza masks" or sued their local government for financial reparation to out-of-work theater employees. Back then it was common for a movie theater's staffing to include stagehands, musicians, and other performers, in addition to projectionists, ushers and cashiers.

Despite some exceptions, like Australia (where 12,000 of their countrymen died after lifting a maritime quarantine in 1919), the flu started to wane during the summer of 1919 with sporadic outbreaks in various U.S. big cities (New York City even had a flare-up that occurred as late as the spring of 1920). But by 1921 the flu had dissipated to a level where businesses started coming back at a level robust enough to christen a new decade of prosperity the "Roaring 20s."

But as quickly as the Roaring 20s jump-started our post-pandemic recovery, the stock market crash of 1929 marked the beginning of the Great Depression and another economic downturn. Undeterred by bread lines and jobs lost, 110 million Americans made their way to a movie theater in 1930 to help buoy their sinking spirits before a silver screen of hope and/or escapism. However, as the economy steadily worsened across the country Hollywood grew more apprehensive about maintaining its audience. Their fears were well placed as attendance dropped somewhere between 60 to 75 million by 1933 with studio profits evaporating. U.S. unemployment hovered around 25% while most salaries declined precipitously if they were still lucky enough to be employed. The public could no longer afford to attend the movies like they did before the Crash. But the weekly pilgrimage of faithful movie patrons represented approximately 60% of the population. This was a powerful testimonial to the commercial viability of movies, both as a cultural institution and a business. Movie going was evolving from being a simple form of entertainment to a new way of cultural life for most Americans. As illustrated below from the Encyclopedia of Hollywood, nearly one-fifth of American recreational spending in the 1930s went to Hollywood. 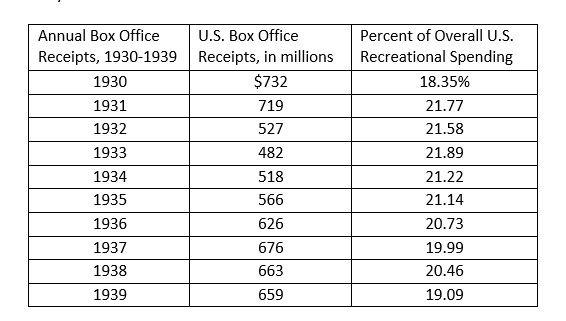 And during the 1940s Hollywood helped U.S. movie goers cope with the fear and paranoia that was the encroaching fascist reality of WW II. And yet, because of the austerity that people faced with food and gas rationing and the limits on where they could travel, movie attendance steadily rose during the war years, peaking in 1946. With Hollywood studios cranking out more than 285 films a year during the war, the 34 cent pricetag for a movie ticket made it a highly affordable pasttime.

But the post-war financial boom was short-lived in Hollywood. U.S. attendance dropped in 1947 as married couples used their GI Bill money on new homes, appliances, and all the expensive trappings that accompany a post-war baby boom. In the late 1940s and into the 50s the rapid spread of television set into motion an irreversible course that changed the terms of mass entertainment in America. Instead of the average American shelling out the price of admission to see their favorite entertainment, sports or political figures appear at their local theater, ballpark or town hall, these same celebrities were now ushered into the comfort of their homes each and every night, with the understanding that they needed to abide by the social contract of sitting through one or two commercial sponsorships in order for the networks to bring them that programming. Hollywood's epitaph was once again being written, only this time with the help of a television antenna, instead of a pen.

And as quickly as TV's living room was supposed to replace the darkened auditorium of the Cinema, it didn't. Movies shot in CinemaScope, PanaVision, 3-D, or recorded in Todd-AO and even, thankfully, the short-lived gimmick of Smell-O-Vision promised an added dimension to the movie going experience that couldn't be duplicated at home. But quite possibly the biggest boon to reinvigorate movie going in the 1950s (and into the early 60s) was the drive-in movie theater. First created by Richard Hollingshead in Camden, NJ way back in 1933, drive-ins exploded in the 1950s to the point of where there were 4,063 by 1958. Even though NATO officially reported less than 325 drive-ins last summer, the reboot of this concept in the current time of social distance movie going has caused enterprising theater owners, creative retailers and entrepeneurs everywhere to develop pop-up drive-in venues that have been selling out in advance while still observing safety protocol.

And that brings us to today where once again the litany of "Cinema killers" is legion starting with Pay-TV, Cable TV, VCRs, DVRs, PPV, VOD, OTT and, yet again, a global pandemic. But consider these facts before placing the "final nail" in Cinema's coffin:

Movie exhibition has faced its fair share of economic challenges, downturns and even tragedies that seem to consistently spawn a never-ending barrage of speculative criticism on the medium's long term commercial longevity; not just now, but almost from its inception. However, if there's anything I've learned in this business it's the resilience of the movie industry to survive, reinvent itself and find new ways to engage audiences to bond over a mutual experience in a darkened room and take that shared emotional connection out into the streets when they leave. History has repeatedly shown that during times of sadness, personal struggle and duress, Cinema can elevate us to a higher place.