Classic Ed: The Wardrobe Malfunction That Changed Everything 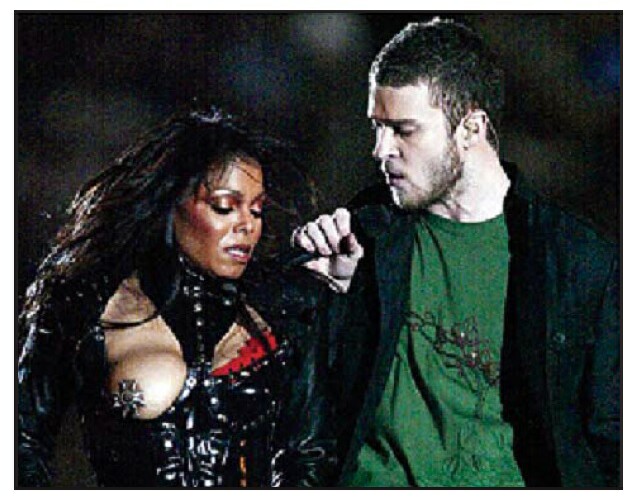 Justin Timberlake's position in the history of Super Bowl halftime shows is very much top of mind right now given his upcoming performance on Sunday's telecast.  Younger readers may not remember that it was Timberlake who was responsible for the brief baring of Janet Jackson's right breast during their rough and tumble performance of "Rock Your Body" at the mid-point of Super Bowl XXXVIII.  The subsequent shock waves that followed this very brief and unexpected occurance may seem quaint, if not flat-out ridiculous, after fourteen years of ever-increasing adult content available for the titillation of all on the internet.  Those people wondering why Timberlake has been invited back, but not Jackson, and why she was vilified much longer than he (even though he was equally responsible) forget that both were given the opportunity to apologize on CBS' telecast of the Grammy Awards one week later.  Timberlake seized the opportunity, while Jackson reportedly refused.  And so the grudges appear to continue.  Anyway, I couldn't help but dig out the column I wrote about it for the February 4, 2004 edition of the Jack Myers Entertainment Report to remind myself of the responses to this unprecedented outrage and my reactions to it all.  The column appears below.  (Also check out this review of the shocking 2004 Super Bowl commercials.)

With one quick flash of one bared breast, adorned only by something called a nipple brooch, Janet Jackson has sent shockwaves throughout the media, big business and the United States government.  The ramifications are awe-inspiring in their sudden intensity. Jackson's northern exposure is currently competing for top shelf news space with the war in Iraq, the continued grounding of international flights, the Democratic primaries and renewed concerns about bio-terrorism.  It will likely be referred to in media columns and government discourse for months to come, and it will be revisited in great detail 11 months from now, when critics reflect on the most memorable television events of 2004.  The eagerly anticipated finales of NBC's Friends andFrasier and HBO's Sex and the City will share column space with the strange behavior of two immature rock stars who made tasteless choices.

Is one lone breast worth all this fuss?  Of course not, but you wouldn't know it from the far-ranging fallout.  It will be difficult to argue that this event, however brief, does not violate a number of rules and regulations involving community standards that are supposed to be enforced by the FCC. Plainly, that can be said about a significant amount of broadcast television content, from the explicit violence on CBS' CSI to the adult language on ABC's NYPD Blue to the sexual humor that permeates NBC's Will & Grace.

Are such rules and regulations outdated?  Should they be tossed on the grounds that we're all going to hell and enjoying the ride?  Who knew Americans were still so sensitive?  The media seemed far more obsessed with the kiss shared at the MTV Video Music Awards by Madonna and Britney Spears than did the public.  Indeed, most people would have never seen that kiss if news and entertainment programs hadn't continually run a clip of it in the weeks that followed.

I can't readily recall a recent example of television entertainment that has agitated so many people in so many different ways.  We have to go all the way back to Vice President Dan Quayle's comments about the pregnancy of fictional television character Murphy Brown to locate a similarly broad and seemingly unstoppable ripple effect.  The howls of outrage from executives at the National Football League and various watchdog groups about the Jackson peep show seem somewhat opportunistic.

The very brief baring of one breast is only marginally more offensive than much of the content of the MTV-produced half-time show, which included suggestive bumping and grinding, kinky costuming and objectionable lyrics.  We all know that kids, teens, adults and seniors alike enjoy the Super Bowl.  Was this someone's idea of multi-generational entertainment?  Rapper Nelly kept grabbing his crotch, continuing a rich tradition begun more than a decade past by Jackson's brother Michael.  In fact, if memory serves, Michael busily played with his manhood in similar fashion during a Super Bowl performance many years ago.  For that matter, Kid Rock was wearing what appeared to be an American flag with a hole cut in it.  Doesn't that violate a law, rule or regulation of some kind in some fashion?

There is a time and a place for all of this stuff, but it sure ain't the Super Bowl.  The NFL knows it.  CBS knows it.  MTV knows it.  AOL, which blindly sponsored the half-time show, also knows it.  These are powerful entities, but to listen to all the finger pointing and cries of "don't blame me" emanating from these companies this week, not one of them had any real control whatsoever over the actions of the half-time participants.  What should we make of that?

Collectively, the NFL, the networks that televise the Super Bowl and the advertising agencies that debut commercials during it have contributed over the years to the deterioration of this cherished event.  Jackson's exposed breast seems almost inconsequential in an environment filled with commercials that celebrate and glamorize sexism and lowbrow fraternity humor.  It is, at the very least, an egregious insult to the hard-working football teams who emerge as the best of the season.  These men represent an American ideal.  Players and viewers alike deserve an event of great class and style. These qualities are not foreign to Super Bowl entertainment. Consider Beyonce Knowles' dignified rendition Sunday of "The Star Spangled Banner."

For his part, and shockingly, Timberlake probably didn't realize that his actions would prove so offensive.  Caught on camera by Access Hollywood as he exited the half-time stage, he seemed positively elated by what he had done.  His feeble apologies about a "wardrobe malfunction" came later.  Let's not forget that Timberlake, who recently turned 23, makes a lot of money for a lot of people in the entertainment industry and in all likelihood rarely hears the word "no" from any of them.

As for Jackson, it is sad that a middle-aged woman of power and proven talent is not above such shenanigans.  Some speculate that she did this to take some of the attention away from her brother, who is busy dealing with charges of inappropriate sexual conduct involving a minor.  But her bizarre bad judgment does little to fortify the Jackson family name at a time when it could benefit from positive reinforcement.

I'm struck by both the exposure of her breast and the nature of the act itself.  When Timberlake grabbed and ripped the bra cup off her right breast his movements seemed forceful and exploitative.  Why would Jackson submit to such a rough, empty gesture by a much younger man in the most public of forums?  There was nothing playful or sexy about it. She looked old and victimized.  He looked like an arrogant twerp.

CBS stands to lose the most from this matter, and not just in the form of millions of dollars that could result from the FCC probe called for yesterday by chairman Michael Powell. Ratings for the Super Bowl were impressive, but any positive publicity has been overshadowed by this scandal.  So has the debut of the most recent edition of the network's grand reality series Survivor, which had its premiere following the Super Bowl. Programs that air immediately after the Super Bowl are supposed to benefit from a priceless level of buzz in the days that follow.  Thanks to the halftime show, Survivor is off to an unusually quiet start.

Madison Avenue is also looking less than impressive.  Most of the talk this week about the ads that premiered during the Super Bowl is negative. Jackson's breast baring has placed unexpected focus on the overall environment of the Super Bowl telecast, which was filled with puerile, pandering commercials.  Bestiality, crotch biting, flatulence and erectile dysfunction are the advertising buzzwords of the week, and they came with a multi-million dollar price tag.  Granted, television viewers are accustomed to a steady bombardment of similarly lowbrow advertisements, but why place them front and center during the one night of the year when the American public actually looks forward to watching commercials?

Meanwhile, TiVo is enjoying a wave of unprecedented publicity as a result of Jackson's bad judgment.  Countless news reports about the event have mentioned that TiVo recorded an unprecedented number of immediate replays of the breast-baring moment.  A number of people will regard this as the best reason yet to invest in TiVo equipment.  Certainly, many offended Super Bowl viewers now see extra value in home technologies that allow for the speedy elimination of commercials.