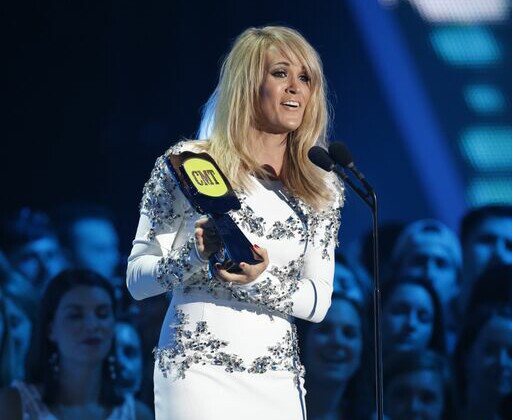 I haven’t missed the annual CMT Awards for 10 years now, and after every one of them, including last night’s show, I am always moved to declare that they are the most reliably entertaining awards telecast of them all.

That may strike some as an exaggeration, and it probably won’t hold up for anyone who doesn’t have at least a remote interest in what country music has become in this millennium. To be blunt: It’s the new pop, and maybe the new rock, but in most cases it is also true to its roots. The messages of today’s country songs are the same as those of the genre’s glorious and more focused past. It’s the packaging and presentation that has changed, making the country sound as powerful a force as any other music in contemporary popular culture.

This is always reflected in the entertainment that the CMT Awards telecast offers. Need proof? Just look at the eclectic mix of performers who scramble every year to be included in CMT’s big show – an event which, I might add, gets bigger every year but never seems to move beyond the reach of country music’s burgeoning fan base. Fans remain a huge part of the program, inside Nashville’s cavernous Bridgestone Arena or whatever space it is taking place in and, in recent years, at an outdoor stage on Lower Broadway (in my opinion one of the most exciting streets in the country). As big as the big show gets it never loses the intimate feel of its early years. That’s a remarkable accomplishment in this era of outsized everything, when bigger is not always better.

I attended the CMT Awards for MediaVillage in 2005, 06, 07 and 08. During that time Carrie Underwood (pictured at top), who was fresh off her win on “American Idol,” won many a Buckle (that’s what the CMT Award is known as) and generally stole the show whenever she performed (as did two other “newcomers” back then, Taylor Swift and Miranda Lambert). It was particularly exciting to see Underwood emerge as the most-honored performer at last night’s show, ten years after she began dominating these awards.

Talent of that caliber doesn’t turn out for any event unless said event is deemed important and worthwhile and, in the case of these awards, irresistible fun for all.

Country’s power players were also out in force, including Keith Urban, Kenny Chesney, Florida Georgia Line, Reba McEntire, Eric Church, Jason Aldean, Zac Brown Band, Luke Bryan, Jake Owen, Darius Rucker, Sam Hunt and Lady Antebellum. So were the smart advertisers who embrace this event every year, especially Nationwide, which for the eighth consecutive year sponsored the strikingly effective Nationwide Stage. That’s a small platform in the massive arena on which up and coming country stars play for a minute or so leading into commercial breaks. A shot at the Nationwide Stage has become one of the most coveted opportunities for newcomers in country music.

Advertiser ubiquity is nothing new in award shows, but it always seems to be something special at the CMT Awards. Sponsorship of the performances on the Lower Broadway stage is key – last year it was all about Pepsi and Blake Shelton, this year it was Kia and Kenny Chesney.

And then there was heavily sponsor-connected newcomer Chris Janson, who seems to have one of the smartest marketing teams in the business today. First he appeared on the Nationwide Stage singing his iTunes hit “Buy Me a Boat.” (Rolling Stone recently published an interesting story about this song, which you can read here.) As the commercial break approached viewers were urged in voice-over to download the CMT app and “watch the exclusive premiere" of "Buy Me a Boat.”

Meanwhile, over on Twitter, Janson was busy telling his tweeps to Shazam the Pepsi/Dollar General commercial he appears in that ran during the telecast to watch the video for “Buy Me a Boat.” 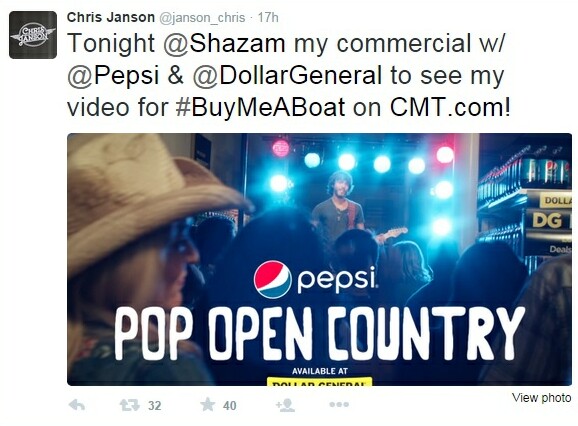 And Pepsi was promoting Janson throughout the show. 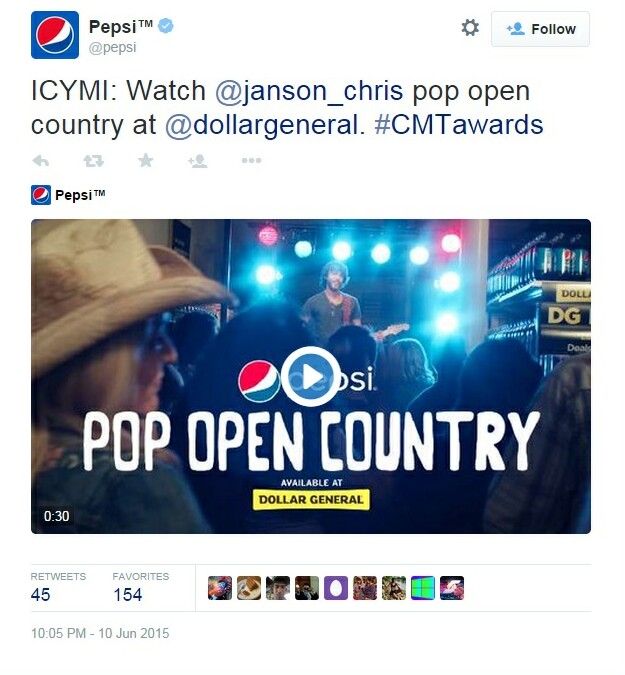 I don’t consider myself an ultimate authority on country music, but after last night I’d be willing to wager that Janson will be a major star of the genre by this time next year and will have a formal performance all his own during the 2016 CMT Awards. If we’re lucky maybe he’ll play at the network’s annual Upfront mini-concert, too (unless Jake Owen agrees to bring his crazy "Real Life" beach party from last night's show to NYC, in which case Janson will have to wait). 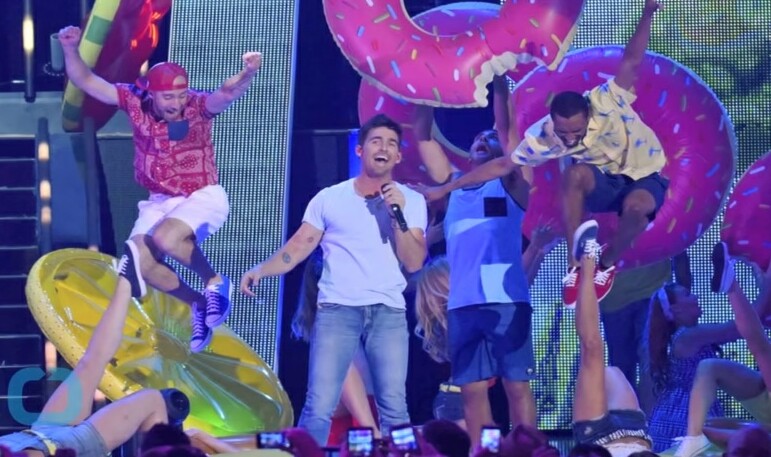