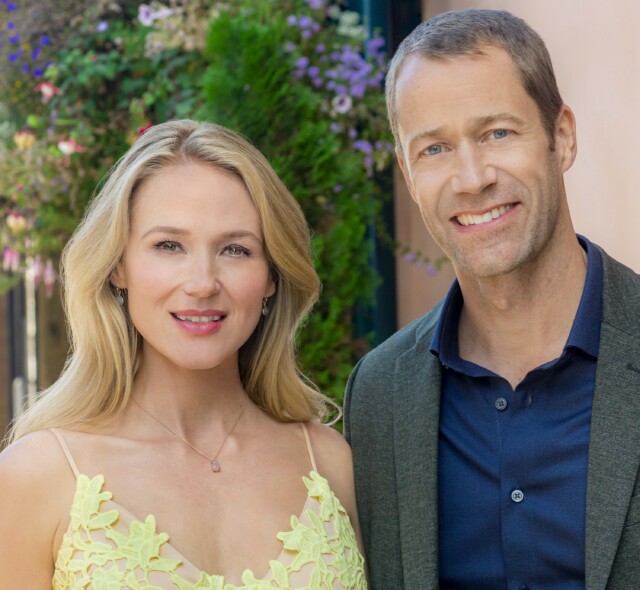 Colin Ferguson and Jewel return to Hallmark Movies & Mysteries on Sunday with Deadly Deed: A Fixer Upper Mystery -- the third installment of their hugely popular Fixer Upper Mystery franchise for the network.  This time Shannon Hughes (Jewel) and her mystery writer tenant/friend Mac Sullivan (Ferguson) find themselves embroiled in the murder of a local bank president, whose fondness for foreclosure provides the intrepid duo a laundry list of potential suspects.  “He’s a banker who dies,” laughed Ferguson during an exclusive interview with MediaVillage.  "It's not a question of, 'Who murdered him?’  It’s more, 'Who didn't want to murder him?' My character is a reporter-turned-novelist, and Jewel's character is a contractor.  Together, we solve the murderers in Lighthouse Cove using our contracting skills. The premise always makes me go, ‘What?’ But it is pretty genius."  (Jewel and Ferguson are pictured at top and below.)

The irony here is the two actors have basically flipped real-life roles to play these characters.  Ferguson is an accomplished DIY-er and Jewel is a writer.  "I have been doing electric and plumbing all week, and I’ll be framing next week," Ferguson said.  "I'm always doing something with construction.  Funnily enough, the only notes they'll ever take from me on the scripts are when I call in and say something like, ‘That's a joist, not a post.  And by the way, it doesn't work like that so there's no way she could do what you're trying to get her to do.’  They usually rewrite and make things more plausible.

"I probably find [the role reversal] more interesting than anyone else," he continued.  "She is a best-selling novelist.  She is everything and it's crazy.  I know this sounds stupid because Jewel is incredibly famous for singing, but a lot of singers can't really sing!  Her voice is unreal.  She's never precious about anything and she is incredibly present; she writes, does music, does everything.  You can actually have a conversation with her about anything because she's interested in everything." 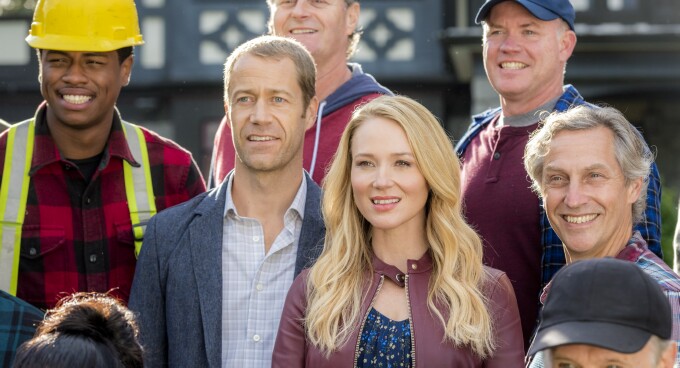 According to Ferguson, his pairing with Jewel in the Fixer Upper movies was no accident.  The actors were handpicked for their "similar energies" by executive producer Joel Rice; hence the on-screen chemistry.  If it weren't there the entire franchise would have been derailed.  "I'd love to say we worked on it and sorted things out, but it was just there," the actor admitted.  "We showed up and that first time we did our first scene we were both like, ‘This is going to be easy.’  We had a day of rehearsal scheduled before the first movie, but we basically canceled it because right out of the gate it was just there.  It would be really difficult to not have chemistry with Jewel because she is really, really, nice."

Ferguson also told me the onscreen relationship between Shannon and Mac deepens in this installment. And while wouldn’t give any spoilers, he's enjoying the fact that Hallmark is letting their relationship evolve at a realistic pace.  "One of the things I like about Hallmark is they're not interested in salacious shock value stuff and they like the fact that [our characters’ relationship] is taking its time.  The network takes love very seriously and you have to earn it.  But now things have deepened a little; maybe my hand will be on her shoulder, or maybe I'll hold a door for her as we cross personal boundaries.  I am incredibly grateful that it hasn't gone from zero to sixty and then they are a couple."

Don't expect these two to be “duetting” in any form anytime soon, especially with music.  "I'm a little musical, but no duets with Jewel," Ferguson laughed.  "I think part of her soul would die if she did a duet with me.  She'd probably say it was the worst noise she'd ever heard."  Instead, Ferguson is reserving his vocal prowess for the four and a half-year-old son he's raising with partner Lindsay Thompson.  "I will do these long rhymes with my son and now he's rhyming -- that's really fun.  But when it comes to acting the only thing he ever thought about me being on TV was that I had the worst job ever.  You go to a location and everyone tells you to be quiet.  He just saw it as everyone telling you what to say, and then to shut up.”

After working sporadically over the past few years to enjoy time with his son, he's ready to dive back in when the little one starts kindergarten in the fall.  He has at least nine or ten more Fixer Upper Mysteries to shoot.  "We've done three, so we will be doing them for a while," he smiled.  "One of the most amazing things is that Jewel's son has started kindergarten so that's how I mark time these days, between her son and [mine] it's been really fun to watch our kids grow up from movie to movie."