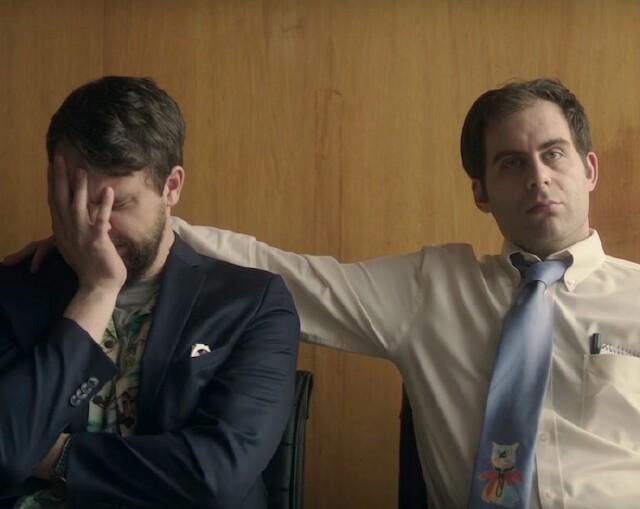 Comedy Central’s Corporate is Office Space meets Waiting … and it’s awesome.  For those of you not familiar with those amazing movies, I am, as the kids would say, smh. These popular workplace comedies each take huge stabs at the soul-killing minutia plaguing the worker bees of offices and restaurants, respectively, while at the same time offering the quintessential depiction of the day-to-day mood in these environments. Both show us that we all think our jobs suck, that (at least some of) our co-workers are all we have and that most of our bosses are knobs.  Thanks to three guys who met on the L.A. comedy scene, Corporate does the same thing, just better and in only twenty minutes per week.

Meet Matt and Jake: two downtrodden junior executives-in-training at a soulless multinational corporation known as Hampton DeVille.  Matt (Matt Ingebretson, pictured top left) is the idealistic half of Corporate’s main comedy duo, and Jake (Jake Weisman, top right) is the cynically realistic half.  Then there’s the hilarious Aparna Nancheria, a comedian who plays HR Representative Grace, Matt and Jake’s only other real friend at work, and possibly the most “normal” character on the show.  Their dynamic works perfectly: Matt’s kind of naïve, Jake’s super-alright with not being that great a person and Grace is usually the one to tell them they’re both wrong.

Don’t get it twisted, though.  This is by no means a by-the-numbers buddy comedy; it’s an ensemble piece all the way.  Adam Lustik (Adam Ruins Everything) and Anne Dudek play John and Kate, respectively.  They’re the actual executives, direct superiors to Matt and Jake, and seem to only answer to Hampton DeVille’s very intimidating CEO Christian DeVille; played by Lance Reddick, the King of Gravitas.

Lustik and Dudek definitely do their jobs when it comes to making their corporate bootlicker alter egos as spineless, warped and borderline psychotic as humanly possible while still being great comedic foils.  The character John actually reminds me a bit of a less over-the-top Dean Pelton from Community, but it could just be because they’re both bald, white, short and wear glasses.  John is the beta to Kate’s alpha, despite the fact that they most often present themselves as a team.  John, for example, has nightmares of being torn apart by anti-corporate protestors, while Kate imagines personally dispatching said protestors via hand-to-hand combat as an exercise during yoga.  Both of them laughably tremble in the presence of Mr. DeVille.

Riddick perfectly embodies the possibly actually psychotic Christian DeVille.  He is a titan of multiple industries, and he’ll be damned if he’s going to let anything threaten the bottom line.  His company’s slogan is “We Make Everything,” and you know what?  They do.  Almost anything capable of having a Hampton DeVille logo slapped on it (a logo that just screams “Evil Corporation” by the way) already has one, and like the choice the series creators made to have dramatic actors like Dudek and Riddick in the cast to help ground the show and really sell the dark comedy aspect of it, this attention to detail is what helps me justify putting Corporate on a pedestal.

Speaking of the series creators, those three guys I mentioned above who met on the L.A. comedy scene?  They were none other than Matt, Jake and series director Pat Bishop.  They’re the minds responsible for this hilariously dark take on the dream-killing, depressing side of life in corporate America.  Their visuals are cinematic and have kind of a lifeless gray tone to them, a la the Matrix in The Matrix or Mr. Robot.  In the vein of Fight Club, they even satirically point a finger at the corporate machine selling the masses supposed happiness in the form of energy drinks, diet pills and anti-everything T-shirts while making a profit off of everything from electronics and produce to war, but they do it all in a ridiculously funny sort of way.

Comparisons have been made to Workaholics, another hit Comedy Central workplace comedy that recently ended, but that really doesn’t vibe.  Corporate is its own beast.  With a ten-episode season and at only 21 minutes a pop I’m predicting some serious demand for a second run long before this one is over.

This is a super-fresh take on an idea that’s been around almost as long as TV has. Being in the workplace is nothing new, and maybe wacky bosses and over-the-top co-workers were what we once needed as a nation after a hard day’s work.  But this generation wants the truth, wrapped in a joke, with pretty visuals sprinkled on top.  Corporate gives us that.  They understand the apathetic disconnect between what should matter and what actually matters to us, how silly it all is, and how to find the comedy in it.

Corporate is telecast Wednesday at 10 p.m. on Comedy Central.