By Jesse Wolfersberger May 05, 2015 GroupM Archives 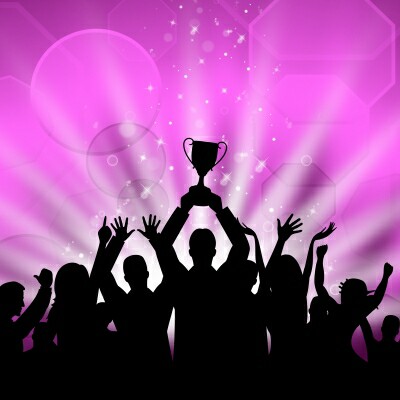 In the current issue of GroupM’s What’s Next Quarterly, a survey randomization experiment of 1,000 people found brands advertising on new platforms connect better with young consumers and are seen as more innovative and creative.

More than half (57%) of respondents between the ages of 18 and 34 agree with the statement: “This advertiser gets my generation,” when presented with a Snapchat ad. That easily exceeds the highest percentage for any age group/media type combination and is even 75% higher than a billboard ad. 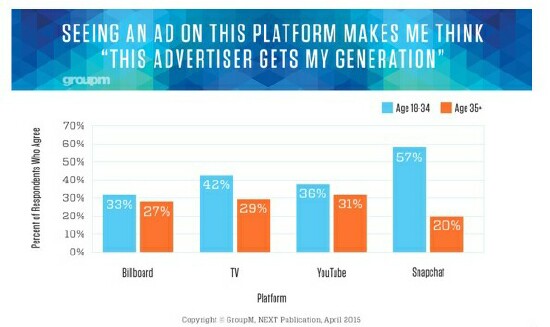 Early adopting brands have also reaped benefits from platforms such as Twitch, the video game streaming platform. In fact, consumers view brands that advertise on Twitch as twice as innovative as those that don’t 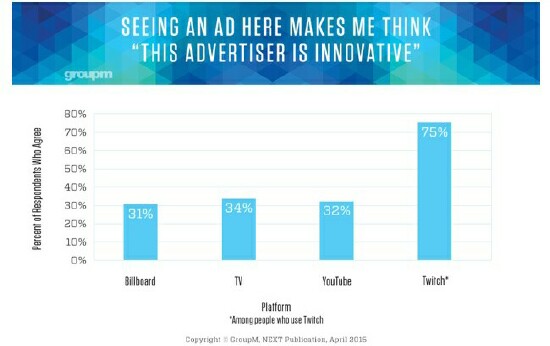 Imagine you are a marketer in the early ‘80s, targeting a young demographic. A new cable channel, MTV, is gaining momentum with young people. Knowing what you know now, it would have been an easy decision to get in on the ground floor of one of the defining cultural influences of the decade, a generational touchstone. But what would you have done at the time? Maybe you would have crunched the numbers, looked at the demographic splits, and made your decision -- the safe, bean counter strategy. At that point, not knowing what MTV would become, you likely would not have taken the risk. It’s safer to let someone else jump in first, test the waters and then join them later.

Using that decision process, you would have missed out on MTV in the ‘80s and are likely now missing out on opportunities with platforms such as Snapchat, Twitch, Instagram and Periscope. These types of platforms are the MTVs of 2015. These are the new generational touchstones: young versus old, mobile versus desktop, pictures versus text, video games versus television. It’s the sentiment of “my parents don’t get it, and that’s just the way I like it.”

Brands should put more emphasis on partnering with new outlets in order to earn the rewards. Being one of the first brands to reach consumers on a new platform leads to a large spike in positive feelings toward that brand. Getting involved with a generational touchstone transcends impressions and GRPs.

If you think you are connecting with young people just because you have a digital campaign, you are behind the times. Simply being digital is not enough to reach today’s young consumers. YouTube poses an interesting example of this. Although YouTube is a quantum leap forward in technology compared to billboards, both fall within only a few percentage points of each other in the survey results. In just a few years, YouTube has already gone from the cool new platform to just as common and ubiquitous as billboards on the highway.

In a world where technology is exploding, it's much easier to keep ad dollars flowing through established pathways, earning a predictable return and fewer headaches. Running an ad on a new platform means extra hours of education, creative and analysis. The return on investment is unpredictable and hard to optimize because there is no previous data for comparison, but it’s those brands willing to take the risk that will come out on top.

With a hot, new device, app or social network around the corner in what feels like every week, it is crucial for brands to understand this risk/reward calculation and have a framework in place to decide the right opportunities to take chances on. GroupM’s What’s Next Quarterly investigates this risk/reward decision through original research and interviews from BP, KFC, American Family Insurance, MEC, and David Pogue, founder of Yahoo Tech.