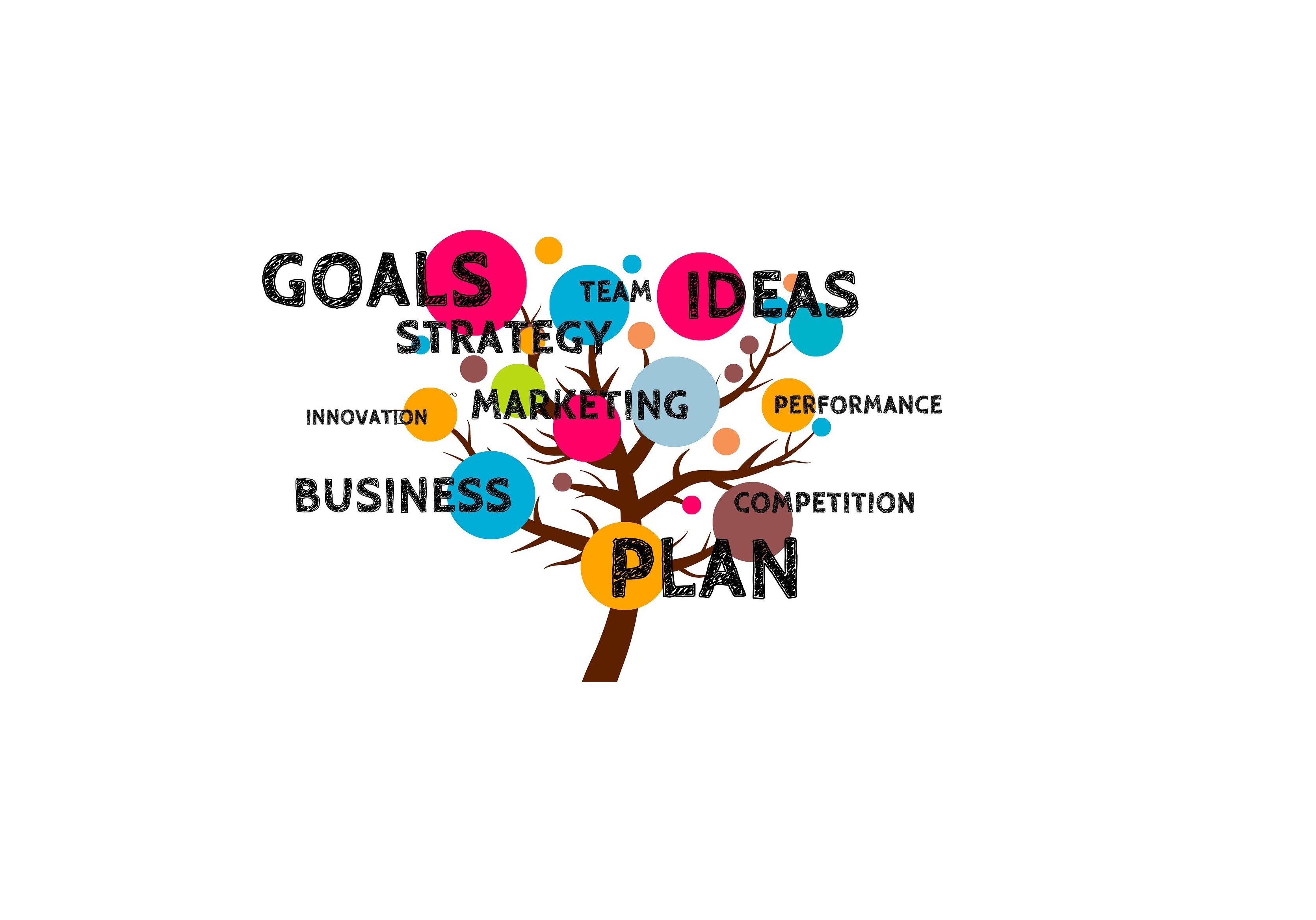 As the cookies and other addressability tools deprecate, the advertising nation has risen up in a celebration of the return of content targeting. Which we heartily applaud and agree with. ID targeting is not going away, but it was time, anyway, to go back and really assimilate the industry's accumulated wisdom and learnings about the importance of contexts. (Before we go on, let me remind you that I'm Chairman of RMT (which is a partner of Reset Digital), and on the Strategic Advisory Board of Adelaide, three of many companies covered in this report.)

Content Targeting: The use of specific vehicles because they reach specific kinds of audiences. For example, Kraft at ARF in June 2012 reported increasing sales of one brand by +81% simply by buying programs with the highest density indices against TRA Heavy Swing Purchasers (HSPs), vs. just using a sex/age target.

Context Optimization: The use of various tools, in order to increase the media impact (however defined), by placing an ad in a context where there is motivational resonance between the ad and the program, and/or by selecting contexts predicted to have high attention or gating out contexts which fail to meet certain criteria. I will unpack this below.

An example of context optimization is a campaign which ARF reported in 2019 in which one of the world's biggest spending advertisers increased the unaided awareness of a brand by 62% by avoiding media environments with less than 20% resonance with the ads according to RMT DriverTagsTM.

Esteemed media research colleague Howard Shimmel points out that both these techniques can also be used with ID targeting. IDs can be used even with non-addressable media as OpenAP has proven. An underlying theme of this article, it turns out, is that all the best techniques can and should be used together. More on this below.

Horst Stipp is one of the foremost industry experts on context optimization, having done a three-year ARF study of the field, and a meta-analysis of a half-century of research studies on the subject. From which he concludes, as the ARF has twice sent out in its CMO Briefings, that the promise of context optimization is of equal size in terms of sales and branding lifts per dollar, to what the industry is receiving from purchaser targeting.

So, let's unpack contextual optimization, who is doing what, where it is going, and our recommendations.

Paolo is telling us that we must do, measure and prove all three of these things in order to maximize advertising success.

Fortunately, there are people working on all three of those problems. I would add the work going on in Brand Safety/Brand Suitability. Brand Safety is the code name for avoidance of hate content and so on, things that no brand would want to be near. Brand Suitability is extensions of that based on individual brand needs, i.e., custom rules on top of the general rules of brand safety. By including them we can see that there are four levels where context comes into play: Message Delivery, Brand Safety/Suitability, Attention, and Ad-Context Resonance.

Putting that into a graph and elaborating on it a bit: 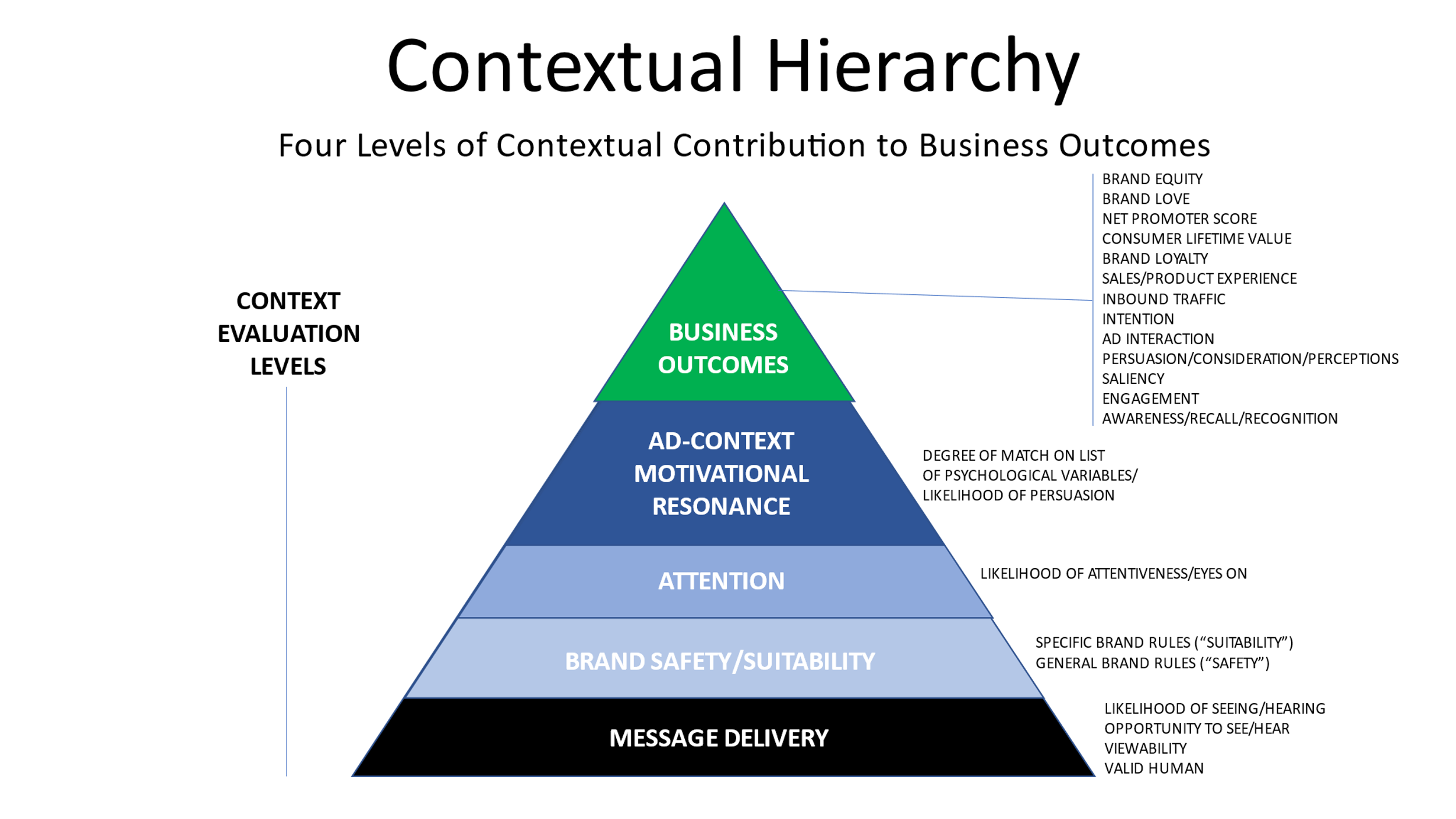 We can evaluate contexts on four different levels. It's obvious that we should be doing so. Most of us are not doing it yet, which makes it an industry opportunity. It affects forecasts because the comprehensive optimization of context will have strong positive effects on business outcomes, and the agencies, sellers and enablers offering built-in use of these tools will enjoy record market share growth.

At the base level, Message Delivery (a term Paolo has aptly re-coined) itself has four levels:

Erwin Ephron, in his book Media Planning, planted the LTS seed, and Joe Philport's vision with Erwin's help led to the first U.S. use of LTS in the outdoor field, the work now carried on by Kym Frank at Geopath. TVision is the leader in LTS in television. LTS is part of context optimization.

Moving up the graph, Brand Safety is essentially keyword-driven, a way of not having your ad appear on sites or in apps that you can pre-define. "Suitability" allows each brand to specify additional objectionable or "subjectively off" keywords by which to blacklist media options.

At the Attention level, Adelaide is the contextual optimization leader. In the bidder Adelaide scores likelihood of attention in terms of Attention Units (AUs). The algorithms were developed by Parsec which sells brands "seconds of viewing" based digital inventory; Parsec then spun off Adelaide to share the learning with the industry and monetize it. Some of the dimensions found to be predictive of attention are number of ads on the page, position on page, the ad unit and less obvious signals available to the bidder that were found to predict attention.

At the Resonance level, RMT is the contextual optimization leader. Its empirically derived 265 psychological variables called DriverTagsTM were distilled from every word in the English language by semantic differential, factor analysis and set-top-box machine learning field trials. Nielsen NCS, Simmons and 605 have all reported strong uplifts in ad selling and branding effects/brand adoption by using RMT resonance optimization. Clients provide links to their upcoming ads, RMT quickly reports the Motivations and Need States in the ads and ranks alternative media environments by their resonance with the ads, and predicts lifts associated with one media alternative versus another. ID-based audiences are also provided as Motivational Targets keyed to your specific creative executions. This is incremental to ad-context optimization; it's ad-person resonance. (I assume that when Paolo says "resonance" he is talking about both types of resonance, ad-context and ad-person.)

That's it, the current leaders in the field of context optimization. If I've missed anyone, please let me know so we can amend it.

Hat's off to the measurers in these fields, the people who give contextual optimizers high or low marks for moving real world needles. Companies like TVision, Realeyes, Lumen, Media Science and more provide measures of attention, which along with other funnel effects are needed to validate predictors of attention such as Adelaide. Nielsen NCS, 605, Simmons and many other measurers of sales, brand adoption and branding effects are essential to proving the effects of resonance.

The real question is: Do I need to do all of these things to squeeze every drop out of the orange?

The answer is yes, all with the following provisos:

Reset Digital, whose concept is all adtech together, was the first to pledge to use as many tools as the client wants. My feeling is that the whole industry is headed that way, and many will be optimizing context at all four levels before the end of the year.

We are grateful to get a perspective from Tony Pace, President and CEO of the Marketing Accountability Standards Board (MASB), former ANA Chairman and CMO of Subway: "Contextual optimization has always been important even though it is generally less recognized. As the world moves to a post-cookie landscape, finding media opportunities where advertising messages not only belong but perhaps have some linkage rises to even greater importance. Messages that fit will not only generate greater attentiveness but, importantly, have greater engagement which drives not only short-term action but long-term brand resonance."