Corey Sevier on Returning to Hallmark, Working with Reindeer and Fatherhood 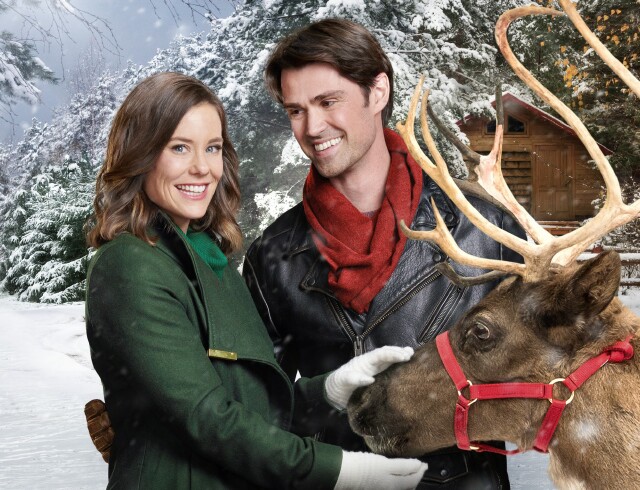 Former Cedar Cove regular Corey Sevier returns to the Hallmark fold this weekend with the Hallmark Movies & Mysteries premiere of Northern Lights of Christmas, starring opposite Ashley Williams.  For Sevier, last seen in the 2017 Hallmark Channel movie The Art of Us, it's a welcome return at his favorite time of the year.  "I love Christmas and have always been a fan," he said during an exclusive interview with MediaVillage.  "This is my second Hallmark movie, and a little coincidence came into play because [this one] is also based on a novel (Sleigh Bell Sweethearts) by Teri Wilson, who also wrote The Art of Us.  I didn't realize that at the time when they came to me with this project.  I just loved the script and wanted to go with it.  Then I realized it was another novel written by Teri.

"She came out to the set, so it was really fun to get to see her again as we'd met on the first project," Sevier continued.  "One of the highlights of working on Cedar Cove was having the opportunity to meet Debbie Macomber (whose books inspired that series) and her family.  I’m not sure if everyone gets the same experience on a Hallmark project, getting to meet the authors and get a sense of how much the readership means.  It's cool and helps to understand that's it's not just a made-up screenplay; these are based on characters that people have already gotten to know and like via the books.  It really helps bring these characters to life."

In Northern Lights of Christmas Sevier delivers a nuanced performance as Alec Wynn, a naive ranch hand whose life is uprooted when the beloved Alaskan ranch he tends is bequeathed to pilot Zoey Hathaway (Williams, pictured above with Sevier and friend) following the death of its owner, her uncle Gus.  Desperate to unload the ranch, purchase a plane and start her own charter company, Zoey heads to Aurora to start the ball rolling.  There she meets Alec, along with resident reindeer Holly and Palmer, and after revealing her intentions, enlists his aid to select the perfect buyer -- someone who will cherish the property as her uncle did.  While clearing the barn, Zoey discovers the Christmas decorations her Uncle used for his annual town Christmas festival and decides to revive it. As the two strangers entertain offers on the ranch, while preparing the festival, they form a bond and soon a fledgling romance.

According to Sevier, it was Alec’s complexity he found most interesting about the project.  “I grew up with such a loving supportive family, that's why I have such rich Christmas memories,” he explained.  “But here’s a guy who didn't have that upbringing.  He shuts off his sensitive side because he’s been alone for a long time.  I was really drawn to the depth of that and starting at one place, where he's a little gruff around the edges, but as the film progresses there’s a romance and he starts to open up about himself a little more and falls in love -- not to give anything away to anyone watching, but I'm pretty sure you will see there is a romance coming.  Hallmark did a wonderful job in turning the novel into a screenplay and I give them credit for creating a character that did have a lot of layers.

“I had conversations with the director (Jonathan Wright) prior to going into this about how Alec should be played,” he added.  “We really wanted him to be more than just the ‘one-layered gruff guy’ who had some vulnerability and in some ways is a little less developed emotionally because he’s spent so much time alone.  So, there was a little bit of child-like wonder when it came to him really experiencing Christmas for the first time.  It was a way of making him a little more interesting and I thought we had to show some vulnerability at the beginning.”

In addition to working for the first time with Williams, an actress he said is “warm, very funny and exactly how she is on screen,” Sevier relished the chance to work with the reindeer that feature prominently in the film.  “They are really cool,” he shared.  “The only time I'd ever seen real reindeer was going to Santa's Village as a kid.  When I read the script I really was like, ‘Oh my gosh, I get to work with these creatures!’  What’s so endearing is they run in packs and like being together, so the challenge of working with them was when we had to separate one, it would miss its partner and we’d have another just off camera.  How often do people get a chance to work with reindeer?  You have to feel pretty fortunate to get these experiences and they didn't disappoint.”

Next for the actor is enjoying a new role – fatherhood!  His wife Kate just gave birth to their son.  “That’s the next big project and adventure [for me],” he laughed.  “It’s a Christmas baby and I’ve decided to take a little time to really suck up the experience and be there for my family.”

Northern Lights of Christmaswill be telecast Saturday, December 15 at 9 p.m. on Hallmark Movies & Mysteries as part of its Miracles of Christmas programming event.