Crackle's "The Oath": A Gritty Cop Drama Worth the Watch 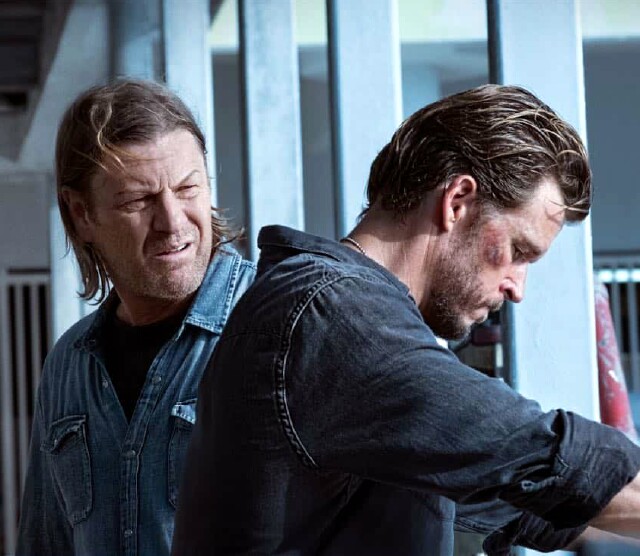 The Oath, Crackle’s newest crime drama, is about a group of police officers that aren’t what they seem to be. Ironically enough, they’re outlaws, and it appears the jig is up. While The Oath -- a pretty damn solid show -– does mostly hit its marks, it has a tiny flaw or two that keep it from reaching perfection.  Let’s talk about them, and why even despite their presence this gritty cop drama is worth the watch.

Given that this is a pay-channel/premium cable-style show made by G Unit Film & Television that’s executive produced by 50 Cent himself, I feel like one could be forgiven for expecting it to be Power-esque.  Initially, it seems things are going that way, especially after the high-energy bank robbery scene in the beginning.  The armed robbers were precise and professional, and the danger felt all too real, a la the movie The Town.  The reveal is that the thieves are actually our leads, a group of dirty cops who run one of the many cop-run gangs in their city.  They call themselves “The Ravens” and are led by Steve Hammond (Ryan Kwanten, pictured top right), the son of their currently imprisoned ex-leader, Tom Hammond (Sean Bean, top left).  Their crew is rounded out by his brother, Cole Hammond (Cory Hardrict) and fellow officers Karen Beach (Katrina Law) and Ramos (Joseph Julian Soria) who I guess doesn’t get a first name.

My first problem is more of a question: What are the rules? This may seem like a weird thing to ask, but hear me out. Every network has rules.  On HBO I know to expect f-bombs and private parts, on FXX I know I’ll probably hear the word “shit” a lot and the content won’t be kid-friendly, and I know I can safely watch Disney Junior with my daughter, but when using The Oath as a compass I can’t seem to place Crackle’s policy.  I definitely heard at least one straight up f-bomb, but the dancers in the strip club scenes were mild at best, which felt like a mismatch.  Starz’ Powerwould’ve proudly checked off both of those boxes, no problem.  I mean, we do get guns, violence and murder, but were we sold a grittier idea than what we got?

A similar problem plagues the Ravens as well.  At first I assumed given their disregard for the law they’re sworn to uphold, that if forced they’d double down on the whole bad guy thing and really get their hands dirty.  Instead, they mostly fall into the good-people-who-do-bad-things category, which is still cool, but not as much fun.  Also, why is Tom Hammond important?  Maybe it was just the camera work and music, but he was kind of built up as a formidable character, and yet no real evidence of any bad-assery on his part manifests (at least not during the first five episodes).  He’s a lot of sizzle, but not a lot of steak. You have Sean Bean, use him.

About halfway through the first episode, the crew gets bagged by the FBI, and of course, they narrowly escape hard time -- at least for the moment -– by helping the feds bring down the rest of their corrupt brothers and sisters in blue.  Naturally they can’t be trusted -- yah know, ‘cause they’re criminals -- so they’re given a baby sitter, Damon Byrd (Arlyn Escarpeta).  This brings me to my second problem: Byrd is the worst.  I’m not a cop, I’ve never been in the FBI, and most of what I know about law enforcement I learned from TV, but nothing about Byrd’s behavior or demeanor seems fitting or appropriate for someone in his position.

As one of the few characters with some sort of backstory, I half expected him to learn and grow as he went along, but all he ever really does is be all pissy because he can’t be home with his wife and kid.  His supervisor, and the person running the Ravens’ RICO case, obvious company-woman Agent Aria Price (Elisabeth Röhm), flat out tells him almost immediately that “relationships can be rebuilt, careers not so much.”  Essentially, if you want this then man up and tough it out -- or go home now.

Byrd chooses to stay, eliminating any non-agency he had in the situation and making any future consequences his own, but he continues to let his feelings cloud his judgment.  I only mention cloudy judgment because that must be the only reason that every time he goes anywhere with these cops they’re like, “Don’t do this, or we’ll be found out and die,” and his response is usually something like, ”You have to listen to me, I’m in charge here,” followed by him doing the exact thing they warned him about.  To his credit, during the Ravens’ less altruistic moments, his comparable level-headedness can be an asset.  I just feel like he always forgets rule number one: Don’t die, stupid.

All of that said, at no point was I able to stop watching. There are better-developed characters that really do The Oathjustice (no pun intended), namely, Karen Beach, Cole Hammond and Ramos.  Beach has a sordid past involving abuse and her mother, Cole is the black and therefore assumedly adopted son of Tom and Gwenn (played by the scene-stealing Linda Purl) and has a serious amount of loyalty for his pops, and Ramos is apparently as good at being a father as he is bad at lying to his wife, which is very good indeed.

The archetype-y nature of some these characters works well for the series.  Agent Price is a no-nonsense hard-ass, which is really all she needs to be, and Röhm pulls it off well.  Kwanten’s Steve Hammond is your typical rebel-style cop, right down to his aviators, daddy issues and American-made car.  Neckbone (Kwame Patterson) is a hardcore criminal, and a damn psychopath, and honestly, his character passes the point of no return atrocity-wise pretty early, so trying to humanize him later on would not only be pointless but damaging.  These characters aren’t the deepest, per se, but with so many moving parts it’s refreshing that the writers let some of them just play their roles.  Sometimes you need the person on tambourine to just be on tambourine.

The Oath aimed for the stars, and besides the aforementioned gripes and some tonal stuff I think it managed to get pretty damn close.  Here’s hoping a second season sees this series as its best self.