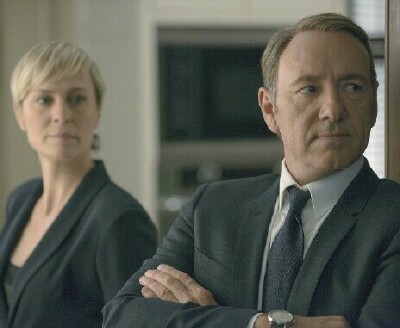 As of this writing I’m five episodes into the third season of Netflix’s “House of Cards” and I’m just not feeling the old magic. Perhaps I’ll feel differently after I watch the next eight – ultimately, it might have more of an impact when consumed in one long binge, rather than in parts. But that doesn’t excuse the relative lack of life in five hours of dramatic storytelling. Frank and Claire Underwood are less interesting as the President of the United States and the First Lady than they were as determined schemers doing whatever they had to do (including commit murder) to reach their ultimate goals. The show still works well as a showcase for series stars Kevin Spacey and Robin Wright (who fascinatingly dominates every scene she’s in, even when she isn’t doing much), and Michael Kelly is outstanding in a back-from-the-almost-dead storyline that is less interesting than it should be. But a drama series – especially one this acclaimed – should have writing and direction to match its production values and performances.

No such problem over at Amazon Prime, which has followed up its modest wonder “Transparent” with another quirky delight that likely wouldn’t have been produced anywhere else. The gently sophisticated comedy “Mozart in the Jungle” (pictured below) recalls the knowing fun of Woody Allen’s early movies about artists and elitists in New York City. (Interestingly, Allen is creating his first-ever television series for Amazon.) It’s not all that easy to relate to, but it is enjoyable to observe the characters that populate this show in their natural habitat. Of most importance, “Mozart” is utterly unlike any other scripted series available today (just like “Transparent”). Indie film favorite Gael Garcia Bernal is a pleasure to watch as eccentric conductor Rodrigo De Souza, a controversial new arrival brought in to shake up the stodgy New York Symphony. The seductive supporting cast includes Saffron Burrows, Bernadette Peters and Lola Kirke. It may not shine as one of the best, but everything about this show sparkles. Plus: Great music! 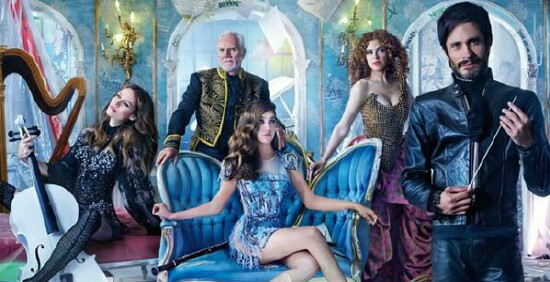 Meanwhile, I’m finally beginning to come around to Fox’s “Gotham,” which has been wildly uneven (and too disgustingly violent) for much of its first season. I credit the addition of Morena Baccarin (late of Showtime’s “Homeland”) as Dr. Leslie Thompkins, a new love interest for the dreadfully dull Detective James Gordon; she has provided some much needed light to balance the creepy darkness of it all. I’m not sure if it’s the way the character is written or the way Benjamin McKenzie portrays him, but Gordon just sucks the air out of the room. Conversely, Thompkins brings a welcome blast of oxygen. So does David Mazouz (pictured below) as the increasingly demonstrative young Bruce Wayne. That fantastic recent guest appearance by Cameron Monaghan (of Showtime’s “Shameless”) as Jerome Lloyd, the presumed future Joker, helped a lot, too. His was as vivid a performance as those of "Gotham" stand-outs Robin Lord Taylor as Oswald Cobblepot, the future Penguin, and Cory Michael Smith as Edward Nygma, the future Riddler.

Monaghan, incidentally, has been outstanding this season on Showtime's “Shameless” as bi-polar and increasingly unstable Ian Gallagher -- especially in that harrowing story in which he went off his meds and kidnapped his mobster boyfriend’s infant son. As noted elsewhere in the press, Ian and Mickey (the similarly terrific Noel Fisher) have become one of the most fascinating couples on television and one that viewers can’t help but feel invested in despite the violence and madness that surrounds these two characters. “Shameless” is sometimes a workout to watch -- it constantly threatens to “go there,” and then does -- but the acting is uniformly extraordinary. I would guess that any actor looking for the challenge of a lifetime would be clamoring for a part on this show.

I stopped watching and thinking about CBS’ “Two and a Half Men” a few seasons ago – hence the delay in watching and commenting on its hour-long finale, which was so nutty and stupid and consistently funny that it left me wondering what I missed in recent years. Filled with the kind of meta touches that send fans of The CW’s “Supernatural” into spasms of glee, it moved faster than any TV comedy I can recall and must certainly have satisfied long-term fans in the way it brought back every significant character who ever appeared on the show in a variety of winning ways. (I use that term with deliberation.) For what it’s worth I thought Holland Taylor stole every scene she was in.

And speaking of gems, History’s “Vikings” remains an unexpectedly impressive adventure series. Now in its third season, it is finally getting some notice from the many critics who dismissed it early on. It may not fetishize violence in the way of HBO’s “Game of Thrones,” but the battle scenes on “Vikings” are no less raw or relentless. Most impressive is the presentation of women on this show as strong, powerful, complicated people. They’re not victims and they often survive on their own merits, rather than simply relying on the men around them. The iron-willed, unstoppable Lagertha (played to perfection by Katheryn Winnick) is that rarest of female characters in adventure shows: A multi-dimensional role model for women of all ages throughout the ages. Meanwhile, Travis Fimmel is so good in the lead role of Ragnar Lothbrok it is interesting to remember that he started his career working as an underwear model for Calvin Klein and portraying the legendary Tarzan in a deservedly short-lived series on The WB.