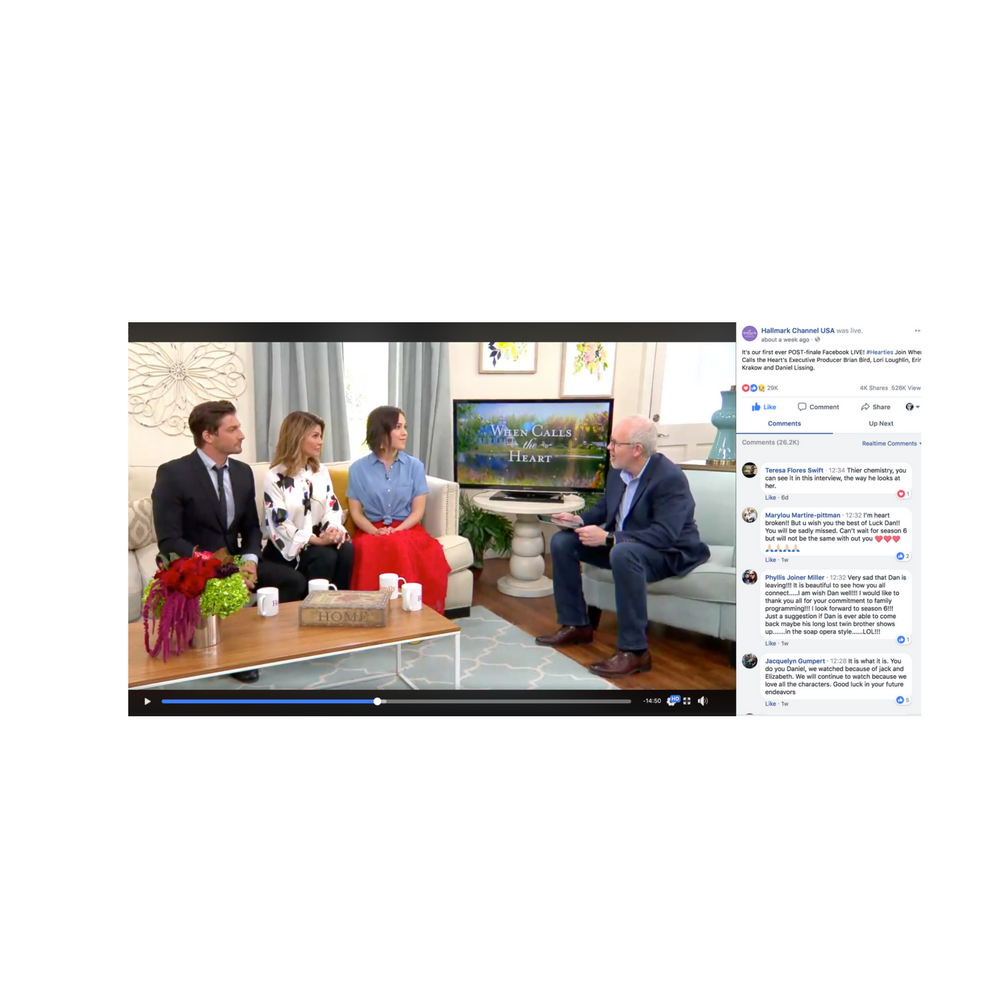 About six years ago, Crown Media's head of publicity, Pam Slay, saw the clear connection between social and publicity and dove in to leverage the platform, quickly capturing about a million followers.  With proof of concept, the network brought on Angela Megrey in 2014 as Vice President of Social Media and Marketing Strategist (pictured below).  Megrey, who already identified as a Hallmark fan herself -- or as they're known with their own hashtag, a #Hallmarkie -- was also something of a wunderkind in social media marketing.  Through a mostly organic but savvy strategy mainly focused on tapping the passion of Hallmark fans, Megrey has grown the group to more than six million strong across all social platforms and has trended on Twitter.

In our conversation, Megrey shared her secrets for upping social engagement.  She started by describing a fan-rousing move reminiscent of how Cagney & Lacey and Designing Women were saved that kept one Hallmark series, When Calls the Heart, from cancellation.

E.B. Moss:  What would you say really helped jump your social media numbers so quickly?  Is it the content?  Or more about social engagement?

Angela Megrey:  I'd say the secret sauce is just how we talk to the fans, when to step in and when not, and being present.  But, to take a step back, When Calls the Heart, specifically, has an amazing story that really illustrates that.  When I joined Crown Media, the show was in the middle of its second season and the board wasn't sure if they were going to renew it.  I saw what was happening with the fans [on social media] and how crazy it was, so I rallied behind them, engaging in a conversational way.  The numbers kept growing week over week.  I went to senior management and said, 'To help get a renewal, what if I can prove out the fandom?'  So, we did a little campaign talking to the #Hearties (the moniker for this show's subset of #Hallmarkies) and said, 'Hey, if you want a Season 3, show us in the ratings.  Show us in your social media.'  And they did!  By the finale, there were triple the number of followers from when I had started.  Now, every year, they do these campaigns: Blitz for Season Six and Hope is Alive for Season Five, and every year the numbers at least double from what they were the year before.  The ratings are improving, too. 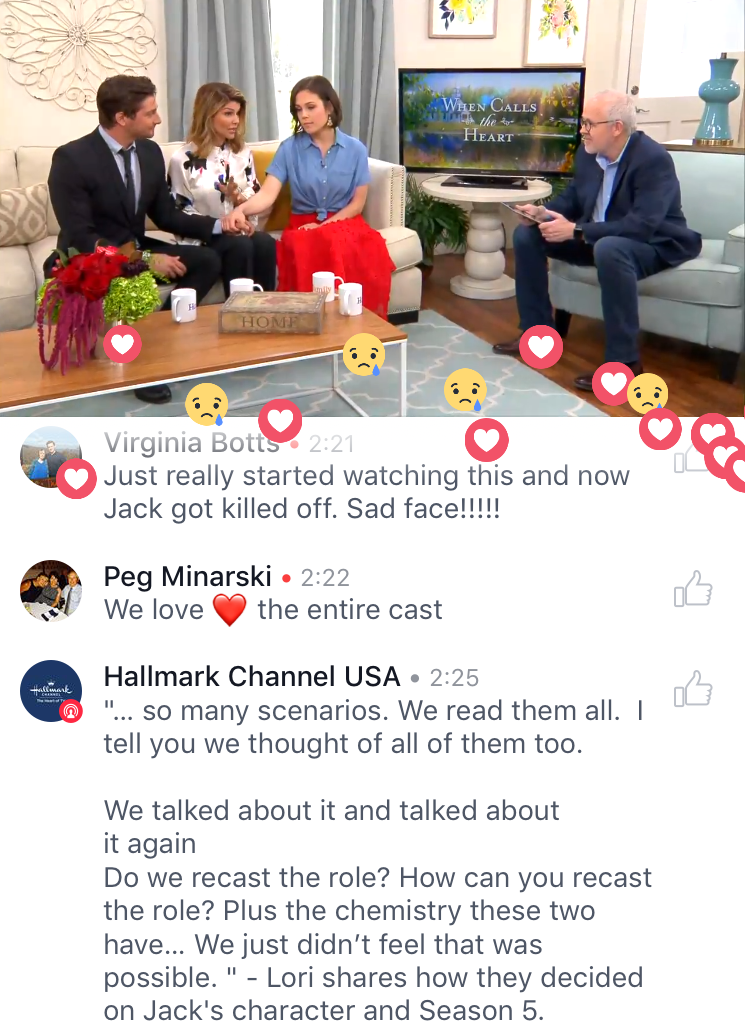 Moss:  Let's talk about how you handled what I'd call a "crisis of the Hearties" after the April 22 When Calls the Heart season finale which everybody wanted to rant about because, spoiler alert, the beloved male lead dies.

Megrey:  Well, we've had a lot of success with Facebook Live events, starting with our first one with the entire female cast of Chesapeake Shores and even one for our snowed out Upfront this year!  Usually, we do Facebook Lives to promote something upcoming.  This is the first time where we gave everybody a chance to talk about it after it ended.  We had an inkling that the Jack Thornton character had passed on in the second to last episode, so we gave them a week to talk about it and be in suspense.  We had a lot of angry people, but we wanted them to tune in to the finale to see where the hope came in, and -- another spoiler alert -- a baby bump!  The finale jumped 25% higher than the previous episode so, again, they came out and watched.  Then they all grieved together.  We were on social media all night long with them, talking to them and promising the Facebook Live event the next day where they could talk directly to the talent to answer fan questions.

Moss:  Lori Loughlin and the other talent handled it really well.  You could see the angry live comments ease up.  That was a softer side of crisis management.  What's your recommendation for a brand dealing with a tougher crisis on social?

Megrey:  I think it's about embracing it and not to hide away from what's really happening.  I think everybody just wants answers.  It's the unknown that's scary for people, and so whether it's something like a character leaving a show or a blizzard and the Upfront [event] doesn't happen, how do we embrace that and turn it around? 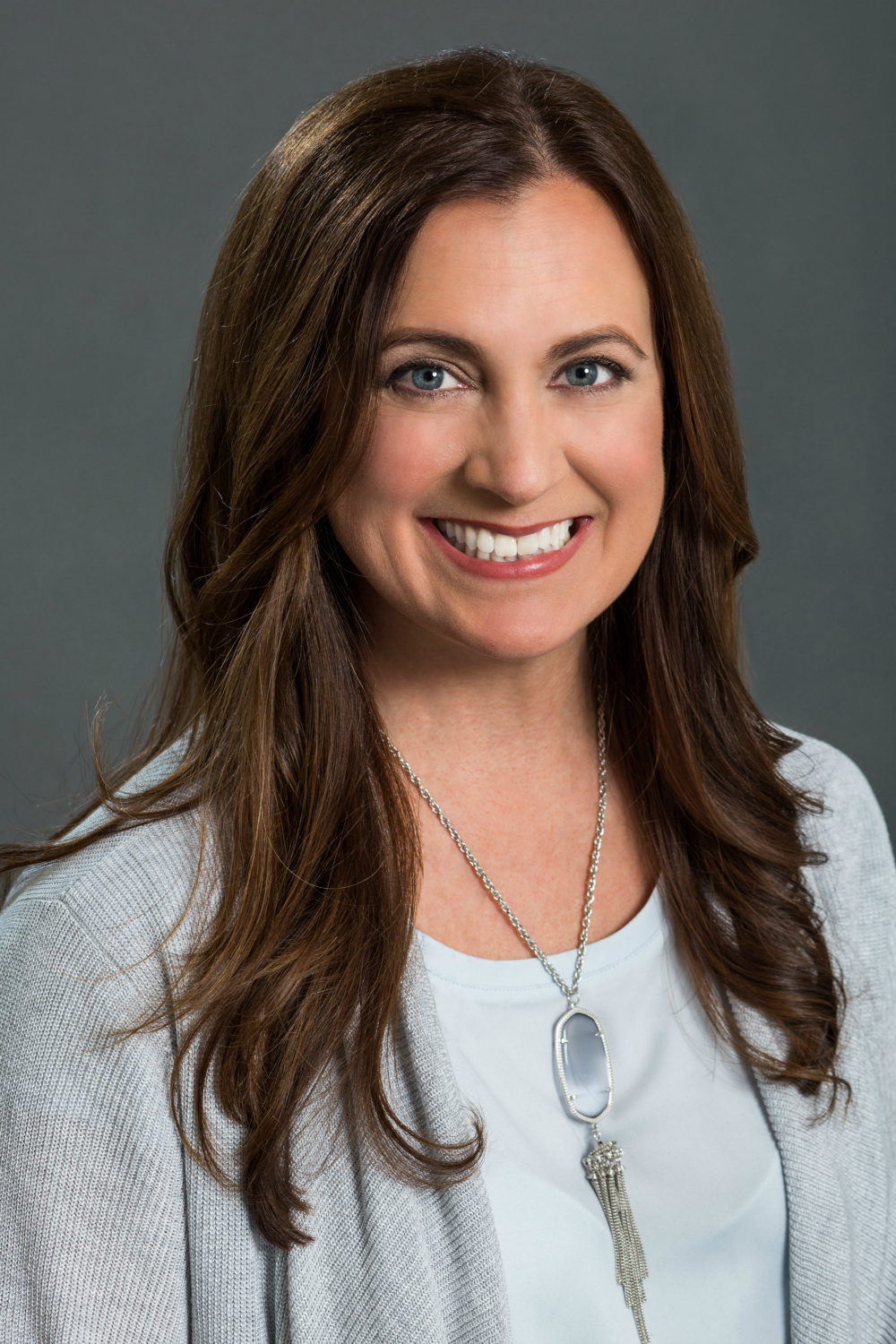 Moss:  What things about the Hallmark channels resonate most, not only with your fans but with brands on social media?

Megrey:  The ad sales department could tell you they have the same conversation with brands -- that we're a safe place.  The content we're putting on social media is not violent.  It's not angry.  It's not salacious.  It's hopeful.  There's a journey, but it's always going to end in that same place where people can feel happy.  They know they can count on us for that.  That's something that really resonates with brands, that they know that they can associate with.

Moss:  How do you bring a brand in and still remain authentic and organic?

Megrey:  One of my favorite sponsorship campaigns is with Balsam Hill, which does Christmas décor in a beautiful way.  We give them some placement in our movies, but we also do a big giveaway every Christmas of a set of Hallmark Keepsake Ornaments and a Balsam Hill Christmas tree.  It's a great way to have the brand as a part of what we're doing and what they're doing.

Moss:  With varying social channels, what's new and what's next?  Where are you really putting your weight, especially with all the changes with Facebook?

Megrey:  We are definitely trying to diversify on our platforms and give fans something different.  Sometimes it's hard to really differentiate why people go to the different platforms for what, and that's a challenge.  Pinterest is definitely something that we have spent energy on the last year and will continue to grow.  We've got a lot of engagement now and the numbers are just growing in the triple digits month over month, year over year, but I think there's so much that we can do with branded content on Pinterest.  You can click to buy products right on there. 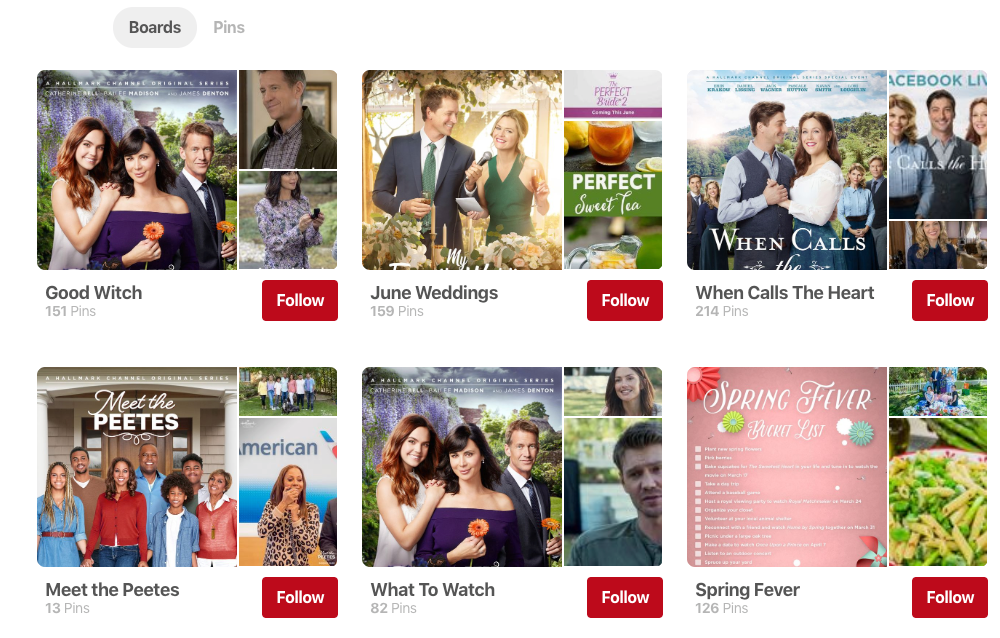 Moss:  Lastly, how do you set your KPIs?

Megrey:  We have two, one of which is our ratings.  For me, my benchmark is a year-over-year comparison and a week-to-week comparison for series.  How did the franchise perform year-over-year?  Then the other thing is that our community needs to be thriving and a place that's attractive to sponsors, and that means we need to have high engagement with our fans.  When you focus on that, the numbers come.  I mean, with our When Calls the Heartfinale we trended No. 5 in the U.S. across everything on Twitter, right along with Westworld, which was an HBO premiere.  We're talking wars and Donald Trump and everything that went on in the world, in the United States.  This show trended No. 5.  That says something about hope. 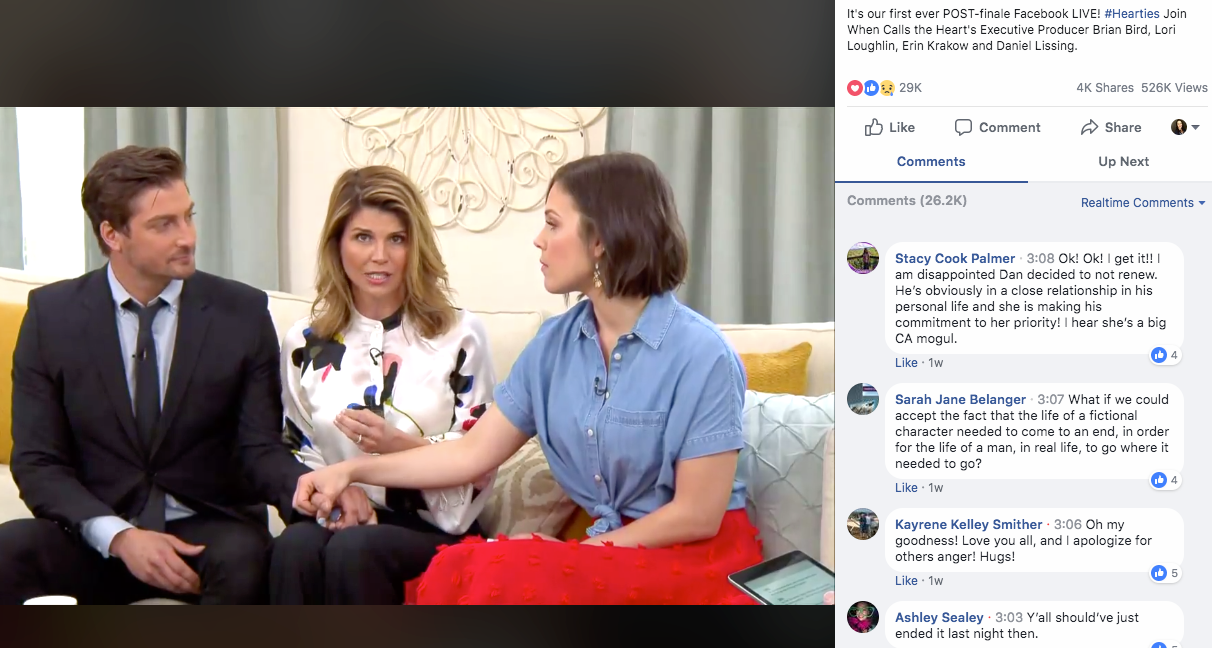