"Dancing with the Stars" to Disney+? CMT Music Awards to CBS? What's Happening to TV? 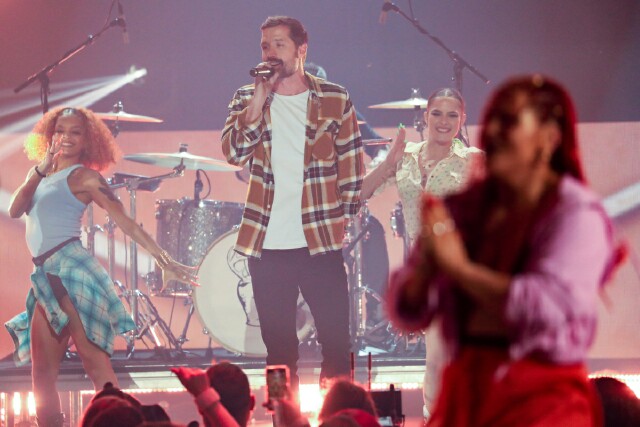 Two recent programming moves have me wondering about the future of everything … at least where television is concerned. The first was Disney's decision to relocate ABC's still vital (and in my opinion better than ever) live competition series Dancing with the Stars from its longtime broadcast berth to streamer Disney+. The second was Paramount's decision last Monday to telecast the annual CMT Music Awards live on its big broadcast cousin, CBS, and stream it on Paramount+. (An "expanded" version of the award show was telecast on CMT itself on Friday night.)

As has been documented here through the years, I am a long-time fan of both properties. In other words, I would watch them even if it weren't for "work." So, I can honestly say that the Paramount move made watching the awards more enjoyable than ever before (except for the several years, many years ago, that I covered them in person for MediaVillage). That's because I was able to text throughout and share the experience with friends who were never able to watch the CMTs, as we used to call them, because of the prohibitive costs of upper-tier basic cable packages.

As for the Disney shift, I'm not pleased at all.

There is so very little left that broadcast distinctly and uniquely does better than anyone else (such as live telecasts of major events, daily soap operas and, I had thought, televising live competition shows) that moving a network's signature series like Dancing has me thinking that it won't be long before we all start mimicking the legendary Chandler Bing himself as we ask, "Could broadcast be any more irrelevant?"

It's not unusual for struggling scripted shows from broadcast or basic cable to get a shot at redemption on a streamer. But the broadcast networks sadly have so little left to really brag about, why would any one of them choose to willingly remove one of their most high-profile live assets and put it in a place where it would seem not to belong? People don't watch streaming platforms live; they watch on their own schedules, which is half the fun of streaming, just as watching something live at the same time as millions of other folks is one of the remaining joys of broadcast. Despite so much audience fragmentation, there is still a reassuring energy that comes with that shared live experience. That's why Dancing remains so successful after 30 seasons. (It was so grand last year, in fact, that I placed it at No. 2 on my 2021 Top 25 Programs of the Year list.)

That is also why ABC's American Idol must still be acknowledged as the most successful new program of this millennium (during its early years on Fox), and why Fox's current momentum is largely powered by The Masked Singer, and why NBC's America's Got Talent remains the most exciting summer series on broadcast or anywhere else.

Why take an appointment program for millions of people and put it on a platform they may not have -- especially one that seems to aggressively focus on viewers under 50? It's no secret that, while Dancing deftly targets younger viewers with many of its "celebrity" dancers, it has a large 50-plus audience that considers it welcome and essential viewing. Will they migrate to Disney+ to follow it? Will they pay to do so? I think not, but I've been wrong before.

Some consider this an exciting experiment that could impact the future of television (as if we don't all know where television is going, anyway). That's life; I understand that there's no stopping progress, including the kind that nobody seems to be crying out for. But why not experiment on Disney+ with a live competition show of its own? Or take the tired American Idol -- which has since its inception aimed young -- and move it over there?

The relocation of the CMT Music Awards to CBS isn't exactly the same thing, but what a boon for the franchise, with ratings higher than ever could have been imagined since it began as the Flameworthy Awards in 2002. I have always considered these the most entertaining awards anywhere on television, including among other music awards shows, which should be considered their own subset simply because they are as much concerts as anything else.

What's more, they have always been among the most advertiser-friendly programs on television. Some examples: A commercial for Fritos ("Down for Everything") was tied directly to the show, as were spots for Sonic featuring Lauren Alaina and Lainey Wilson in a car enjoying Sonic food while talking about the Awards. And inside the cavernous Municipal Auditorium, where much of the show took place, one of my favorite CMT Music Awards traditions from way back in the aughts continued as six country newcomers (Elvie Shane, Parker McCollum, Priscilla Block, Jessie James Decker, Breland and Caitlyn Smith) were given a hot minute each on a special side stage to play into commercial breaks. That strategic spot has had different sponsors through the years; this time it was the Ram Truck Stage.

Did I mention that the CMTs are nothing if not flexible? Co-host Kelsea Ballerini took ill days before the show (reportedly with COVID), and since she couldn't leave home, she winningly hosted from her living room. (The other co-hosts -- Anthony Mackie of the Marvel Cinematic Universe and country star Kane Brown, also handled the gig with much skill.) Meanwhile, Nashville was buffeted by torrential rains during the telecast, but the singers on the outdoor stage in the middle of Lower Broadway (including Cole Swindell, Lainey Wilson, Cody Johnson, Jason Aldean and Bryan Adams) still delivered.

Apparently, nothing dims the party spirit in Nashville, nor the party vibe of the CMTs. (Kenny Chesney fittingly closed the show with a rousing rendition of " Beer in Mexico.") The addition of CBS extended that vibe exponentially farther, making it easy for millions of additional people to find them.

That's the kind of programming experiment I like to see.