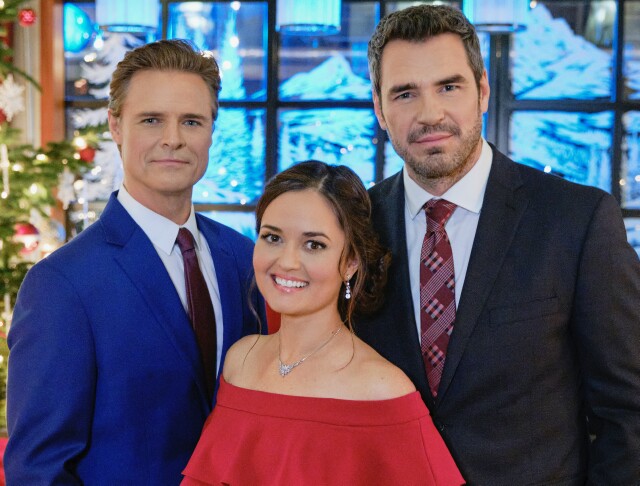 Last Christmas, Hallmark Channel favorite Danica McKellar spent Christmas at Dollywood, delighted to be sharing the screen with the legendary Dolly Parton. Fast forward through 2020 and McKellar is delighted to simply be working and to have completed Christmas She Wrote, her sixth Christmas film and 14th movie for Crown Media Family Networks. She is so happy, in fact, that she has a special treat in store for all Hallmarkies tuning in to the premiere of the movie on Sunday, December 6.

"We all need a little more cheer this Christmas," she shared during an exclusive interview with MediaVillage. "During both the East and West Coast airings, if you tweet using the hashtag #ChristmasSheWrote, along with my handle @DanicaMcKellar, my goal is to answer every single tweet!

"I will also be picking a couple of winners to get signed pictures of me, along with notes I wrote on set from the movie," she added. "I saved a bunch of them and thought it'd be fun since the movie is called Christmas She Wrote, and I wrote all over them." In keeping with the Christmas spirit, she also plans to give back via the app Cameo with all proceeds going to children's charity. 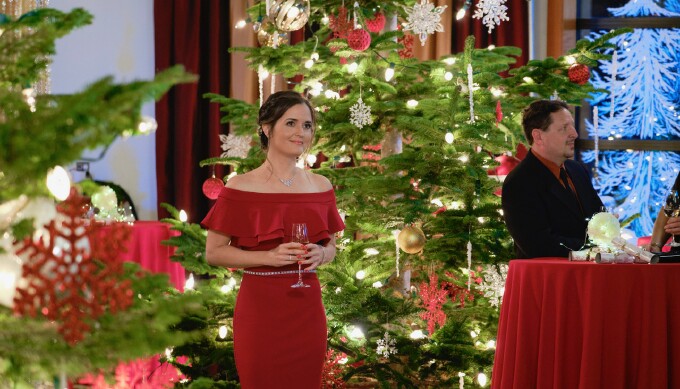 "It was great to get back to work after the shutdown," McKellar beamed. "I didn't know what to expect because of COVID. I had to quarantine in Canada for two weeks before being allowed to go anywhere or shoot as they're very strict with [their] restrictions. It wasn't bad, and I got tested regularly, everyone had masks, temperature checks, and hand sanitizer. I'm not giving anything away by saying this is a romantic comedy, so there might be a kiss, and we had to gargle with hydrogen peroxide beforehand.

"I was worried that this film might not have happened, and we actually just finished this in October," she continued. "I'm sure they are still working on it, and somehow it will air on time and be great. I can't believe that Hallmark managed to get 40 Christmas movies out there! I mean that's the same as the year before, and that's absolutely incredible. It was all hands on deck! They made them all really close together. I'm just so grateful that I got to be a part of one of them. This movie has Christmas in every scene."

In Christmas She Wrote, McKellar stars as Kayleigh, a popular New York writer whose column, "Your Best Self," is abruptly dropped before the holidays. Distraught, she reluctantly heads home to evaluate her life and spend time with her family; a place she is wary to visit due to fear of running into her ex-fiance Dan (Dan Payne, pictured at top right). When Tripp (Dylan Neal, top left) the grinchy managing editor who canned her column, shows up full of regret and tries to woo her back, Kayleigh decides to stick to her plan of staying put. But, as the two spend quality holiday time together and she gets to know the real Tripp, Kayleigh begins to wonder if she was too hasty in judging him. Then pesky old flame Dan comes along with hopes of rekindling their relationship and extinguishing any feelings Kayleigh may have developed for Tripp.

Advice columns are nothing new to McKellar, whose own social media is an array of helpful hints ranging from homeschooling to parenting. "This character is probably the one closest to me I've played," she laughed. "I actually started writing an advice column when I was 14. I wrote one for Teen Beat magazine called 'Dear Danica.' I did that for about four years, so even back then I liked advice columns and liked to reach out and chat with people and give ideas.

"Kayleigh's column is actually very similar to the 'McKellar Motivational Monday' live streams I do weekly on Facebook Live, Instagram Live and Twitter," McKellar continued. "It's about being the best versions of ourselves. You could call my 'Motivational Monday' posts 'Your Best Self,' as that's what it's all about. So, reading the script I was like, 'This is me! I do this already and I love it!' Then I read the ice-skating scenes and was like, ‘You are going to have to get someone else for those.’

Thankfully for McKellar, Hallmark listened. "I did a [behind-the-scenes] TikTok about what they had to do for me to be skating," she laughed. "Not only did I need a photo double for wide shots, but also for close-ups moving across the ice. I can dance -- I did Dancing with the Stars right? -- but come on. It became my most viral TickTok with about 8.7 million views. People loved seeing how bad I am at skating. Meryl Davis and I were on the same season of DWTS, she's a 2014 gold medal-winning ice dancer and good friend, so maybe she could've given me some pointers."

Adding to the fun was the fact the shoot became a sea of familiar faces for McKellar and a family affair. "Dan Payne (Dan), who played my ex-boyfriend in Matchmaker, plays my ex-fiance. Maybe Hallmark thinks he looks like the guy that will never happen for me? I worked with Andrew Francis (Stephen) on Coming Home for Christmas. April Telek plays my sister Amy, and her real-life daughter Ava plays Charlotte, my niece. They're both adorable and so fun. I worked with April on Love and Sunshine last year; she's a fantastic actress and we had a great time. I helped Ava with her math on a few occasions, and we decided that I'm now her honorary Aunt Danica. Now I check in with her to see how her math is coming and what's going on. Dylan was the only one I hadn't worked with, and he was great."

Christmas She Wrote will be telecast Sunday, December 6 at 8 p.m. on Hallmark Channel as part of its Countdown to Christmas programming event.