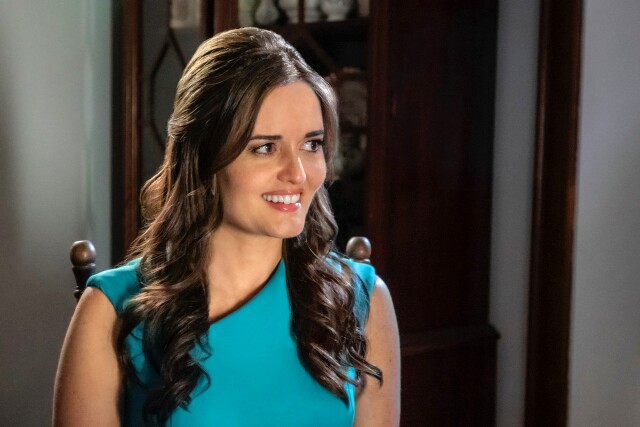 After starring in a string of hit romance movies for Hallmark Channel, fan favorite Danica McKellar is putting love on hold and jumping ship, exercising her expert puzzle-solving skills in The Matchmaker Mysteries, a new franchise on sister network Hallmark Movies & Mysteries.  The first film, A Killer Engagement (premiering on Sunday), introduces viewers to Angie Dove (McKellar), a matchmaking reality TV show host who, after the bride to be in her latest pairing mysteriously dies at her engagement party, discovers her knack for pairing couples extends to solving crime.  Engagement is indeed a departure from the 10 romance-themed projects McKellar has done for Hallmark, which began in 2015, and she’s excited for fans to finally see it.  “This was so much fun,” she declared when MediaVillage chatted with her about the new venture.  “I love doing the Hallmark movies, and I hope I get to do them until I die, as falling in love and romance are so wonderful and life-affirming, especially the way we do it on Hallmark Channel.  But this is different!  We’re solving mysteries, and it takes things to a whole different level of intrigue.

“For someone who loves math, puzzles and figuring things out, like me, this was right up my alley,” she continued.  “I had so much fun not only getting to act in it but also serving as an executive producer.  I'm not done with love; it’s just that, for the moment, I'll be a little preoccupied with the mysteries.”

For McKellar, The Matchmaker Mysteries: A Killer Engagement, has been a labor of love and something she’s poured her heart and soul into.  “I've been a part of this [project] for over a year now, as a part of the writers’ meetings and dealing with the other producers to come up with ideas,” she said.  “I actually named the character Angie Dove, and the title A Killer Engagement was also something I came up with.  It’s been so much fun to be a part of the whole process.  [Creating] a puzzle is almost more fun than solving it.  How do we make this a really fun puzzle for people to figure out?”

As an accomplished mathematician and puzzler, McKellar admits the character of Angie fit like a second skin.  “One of the things that stood out about [Angie], and this was from the first outline, was making her really smart and having her use her matchmaking skills [in a smart way],” she explained.  “I wanted to make sure the only mystery we could do was a Matchmaker Mystery; that way we could establish it as our thing.  The network has so many amazing mystery franchises at the moment, so we needed something that would make ours different.  The matchmaking element does that.

“Also, we have a lot more comedy, so it was about being a lighter version of a mystery, one that also happened to involve romance,” she said.  “That’s something Hallmark Channel does very well.  It wasn't weird [for me] to not have a romance in this one, mainly because of how much I love solving things and creating puzzles for others to solve.”

Millionaire Matchmaker host Patti Stanger was an executive producer on the project, which McKellar says helped considerably in the formation of her character.  “I was a fan of Millionaire Matchmaker, back when I used to watch more TV,” she laughed.  “I always found human dynamics really interesting, and as an actress, I love to study human behavior.  [Patti] gave me some advice on matchmaking, but more about observing people.  It all helped form Angie Dove.  So, being able to use those aspects of being a matchmaker to also solve crimes was helpful.  Patti sort of became a consultant for me on set and she had a cameo, too, where she compliments me on my matchmaking skills.  That was fun.  She also came in handy for ideas on dialogue, some which made it into scenes.”

When it comes to matchmaking, McKellar admits she’s never been adept, but she did learn one thing.  “I'm not sure if there is a math to matchmaking,” she explained.  “It's like asking if there's a science to acting, but when you boil it down, it's more of a gut feeling and that seems to supersede everything.  It needs to be intuitive and I believe that while Angie Dove uses scientific methods of observation, [a match] really results from a certain  je ne sais quoi  and some magic.  There's so much to it that you can't nail it down to being science.” 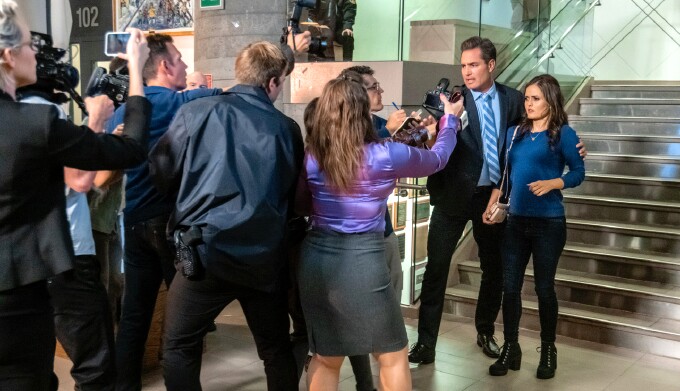 McKellar has high hopes for the franchise, which also stars Victor Webster (pictured above, right, with McKellar) and Bruce Boxleitner.  She’s had meetings for the next installment, with three planned for 2020.  She’s also squeezing in Christmas at Dollywood (to be telecast later this year), complete with a cameo by Dolly Parton herself.  “I leave this week to start filming that,” she smiled.  “I’ll also be serving as an executive producer as it was my idea.  My book Goodnight Numbers was invited to be a part of Dolly's charity Imagination Library, and I got to meet her when I did a reading at the Library of Congress.

“I came back from that and was having lunch with [Hallmark's executive vice president of programming] Michelle Vicary, she asked for ideas for Christmas movies, and I said, ‘How about Christmas at Dollywood?'" McKellar continued.  "That intrigued her.  A writer and producer later, I pitched it.  Hallmark CEO Bill Abbott suggested bringing Imagination Library into the script, so it's wonderful to be able to help promote that incredible charity.  I have a big heart-to-heart scene with Dolly, and it has to be perfect.  That is a bucket list, lifetime achievement moment for me!”

The Matchmaker Mysteries: A Killer Engagementwill be telecast Sunday, October 6 at 9 p.m. on Hallmark Movies & Mysteries.