Danica McKellar Teams with Dolly Parton for “Christmas at Dollywood”

By Steve Gidlow December 05, 2019 Behind the Scenes in Hollywood Archives 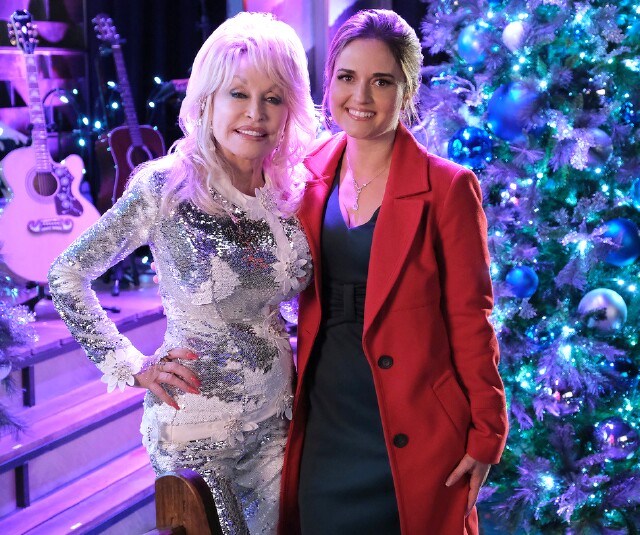 As an accomplished mathematician, and author on the subject, equations come easy to Hallmark star Danica McKellar.  So, when asked if she had any ideas for Christmas movies while at lunch with Hallmark’s executive vice president of programming and network publicity Michelle Vicary, McKellar quickly performed some simple math.  The results were impressive: the words “Christmas” and “Dollywood,” plus the preposition “at,” added up to perfect Hallmark Channel Christmas fare (and her 12th movie for Crown Media Family Networks) - - Christmas at Dollywood.  “[Michelle and I] were constantly talking about Dolly Parton, as I had just returned from a reading at the Library of Congress after my book Goodnight, Numbers had been inducted into Dolly's Imagination Library,” she explained in an exclusive interview with MediaVillage.  “That title intrigued her; so, a writer, producer and treatment later, I pitched the movie.”

(Editor’s note:  Hallmark Channel this week announced that it has entered into a strategic partnership with JCPenney featuring custom on-air content, digital and live activations, exclusive in-store retail displays, and more, all centered around Christmas at Dollywood, which will make its debut on Dec. 8 at 8 p.m.  As part of that, McKellar will host a series of six custom vignettes to air during commercial breaks this Sunday throughout the premiere telecast of the movie.  Produced by Crown Media Productions, the 30-second spots will showcase some of the JCPenney holiday items McKellar has in her home, and they will be followed by 15-second ads.  The vignettes will also be featured on Hallmark Channel and JCPenney digital platforms, social channels and the Hallmark Movie Checklist App.)

“(Crown Media CEO) Bill Abbott was the one who wanted to bring Dolly’s Imagination Library into the script," McKellar explained.  "It's wonderful to be able to help promote an incredible charity that has given away 125 million copies of books to kids that normally couldn't afford them.  They make low-cost copies of children's books and ship them out to kids.  That means everything to me.  It's an incredible organization." 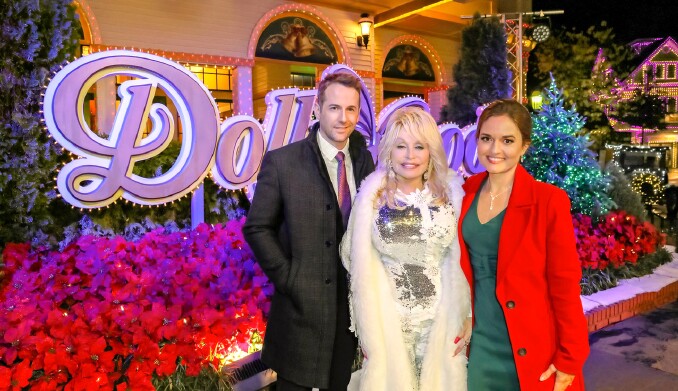 In Christmas at Dollywood McKellar stars as Rachel Davis, an event planner who returns to her Tennessee hometown to tackle the mammoth task of organizing Dollywood’s 30th Smoky Mountain Christmas celebration.  Rachel wants the festivities to be as “larger than life” as Parton, and after being teamed with an unimaginative operations director, Luke Hakman (Niall Matter, pictured above left), it's apparent she has her work cut out for her.  If that's not enough, Parton herself decides to play matchmaker, hoping to make the season even brighter for everyone involved with her Christmas celebration.

For McKellar, everything about the movie hinged on Parton's participation, and thanks to her prior association with the legendary singer, it was as easy as she'd hoped.  "Concerning Dolly, I only ever heard yes," she said. “I know she's busy, so it was amazing that she could give us her time.  But you never know; what if her schedule had changed and she was unavailable?  I held my breath for a lot of it, so to be there on set with her was so gratifying.  I’m still not totally in touch with the fact that I did a movie with Dolly Parton!

“I’m sure having [the] Imagination Library in the story touched her heart,” she added.  "Her father never learned to read, so she wanted to make sure it never happened to others.  It’s a little like her gift to the world.  The library isn't in every state, like California, so I find a lot of people haven't heard of it.  I’m just glad this movie will help to get the word out.”

McKellar refers to everything about Christmas at Dollywood as “crazy amazing."  The fact she got to create, executive produce and share the screen with Parton, are bucket list moments.  In fact, for one memorable scene, the veteran actor even experienced an unfamiliar feeling -- butterflies.  “I have a big heart-to-heart [scene] with Dolly and I actually got nervous before shooting it,” she recalled.  “I haven’t been nervous before shooting a scene in a very long time and was asking myself, ‘What is going on?’  In the scene I stand up, act surprised and say, ‘Dolly!’  We shot a few takes without her, and they created all this anticipation.  When she walked in, in a blaze of glory in a silver sequined outfit, saying, ‘Merry Christmas everyone!’ I just melted.  Her voice is so perfect and iconic.  I was truly beaming from the inside all day and couldn’t wipe the smile off my face.” 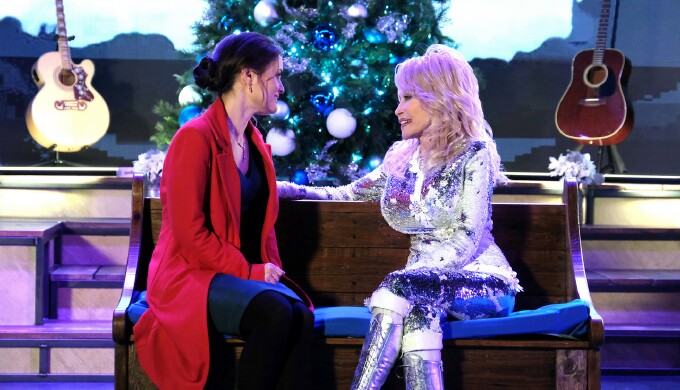 She even helped co-star Matter when it came to taking home a memorable keepsake from the shoot.  "It was my first time working with Niall and he's such a professional and so good," she said.  “While we were working with Dolly, I said I'd get a picture of them together.  Niall said he didn’t want one (as he was being professional), so I arranged a picture of the three of us.  I sent it to him after cutting me out and told him ‘You needed this picture.’  I knew he really wanted one and he thanked me.  I mean, you might say you don’t want a picture with Dolly Parton, but everyone wants a picture with Dolly Parton.”

As McKellar busily plans her own family Christmas, one that includes some family down-time and making her traditional chocolate Yule log, she’s also looking forward to reading the script of the next installment of her Hallmark Movies & Mysteries Matchmaker Mysteries movie franchise.

While McKellar is grateful for all her blessings, it’s the gift of spreading a little annual joy via her Hallmark movies that she’s particularly happy about.  “So many people tell me, ‘You make Christmas for us.  We sit together to watch your movies as they make us so happy.  It wouldn’t be Christmas without you,” she shared in closing.  “That makes me feel good.  I feel lucky to have been invited into people’s living rooms since I was a child, and now I get to do it with these Hallmark Christmas movies and love stories.  I love entertaining and inspiring people to be their best selves, so I am grateful.  It’s the best company to work for and they make the best movies ever.  They make people happy and feel good and there’s nothing better than that!”

Christmas at Dollywoodwill be telecast Sunday, December 8 at 8 p.m. on Hallmark Channel as part of the network’s Countdown to Christmas programming event, currently celebrating its 10th anniversary.