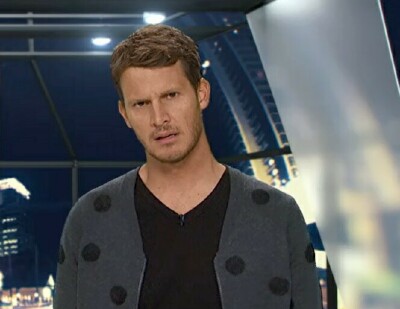 It’s always fun when Daniel Tosh goes nuclear, especially when his target is a giant corporation. That’s exactly what the “Tosh.0” star did on his show this week when he opened a can of whup-ass against ESPN, targeting a new feature on the latter’s signature program “SportsCenter” titled “Awesome Video Segment.”

The reason Tosh was so miffed is that he considers the brand new “Awesome Video Segment” to be a rip-off of the “Web Redemption” feature that has been an integral part of his Comedy Central series for many years.

In “Web Redemption,” Tosh highlights a video clip in which somebody does something particularly stupid or suffers an indignity of some kind (accidental or otherwise) and then brings the person (or persons) from the video to Hollywood to re-create his or her moment of infamy, always filtered through the naughty humor that has made Tosh a star. Prior to these remakes, or re-shoots, Tosh interviews the video “personality” about his or her public embarrassment and then almost always asks, “Are you ready to give it another shot?”

So it is not surprising that he was somewhat apoplectic about “Awesome Video Segment,” which was all about a Canadian singer named Mark Donnelly who took a spill on the ice while singing his country’s national anthem before a hockey game. (Donnelly was skating while singing and tripped over an inconveniently positioned strip of red carpet.)

“I know what you’re thinking,” an obviously annoyed Tosh told his audience after showing the clip. “That would make a great ‘Web Redmeption.’ Apparently you’re not the only one who thought so!

“It’s bad enough MTV has a PG girl version of this show,” he went on, making a reference to the former music network’s popular “Tosh.0”-like clip job, “Ridiculousness.” “But now sports networks are stealing from me? Did ESPN really think I wouldn’t notice when they came up with an eerily familiar new segment called ‘Awesome Video Segment’?”

Tosh then showed the clip as it played on “SportsCenter,” followed by footage of an eager young ESPN reporter telling his audience that he had many questions about the incident and “went to Canada to ask Mark Donnelly what he was thinking.” That was followed by a clip of Donnelly saying he could not see the carpet because of the bright lights over the rink.

“Alright, listen closely and tell me if you’ve heard this next phrase before,” Tosh cut in.

Then it was back to the ESPN reporter asking Donnelly, “You think you would be willing to give it another shot?”

“They must have missed that one episode where I said that,” Tosh exclaimed, just before a montage of clips in which he said the words “are you ready to give it another shot” in more than a dozen “Web Redemption” segments.

Tosh then played the rest of the “Awesome Video Segment” clip, in which Donnelly, now wearing a lot of protective padding, managed to re-create his big moment on the ice without tripping over anything.

That’s when Tosh went nuts. “You f*cking hacks are cheapening my brand!” he hissed, steam rising from his ears.

“I’m fine with kids in high school or college plagiarizing, but once you work for a real network you should have some God-d*mn self-respect! That’s why I created a new segment titled ‘Sport Science.0!’” At that point the logo for the ESPN feature “ Sport Science” appeared behind him with a bright red “.0” added.

A clip from “Sports Science.0” followed, featuring Tosh standing in front of a row of treadmills and spewing bile about all things ESPN.

“On ESPN’s flagship show ‘SportsCenter’ each highlight lasts an average of 45 seconds and contains an astonishing 217 unfunny forced puns,” he said. “The douchey frat brothers they call anchors are whiffing on an improbable 100 percent of the jokes they try to make!” he continued, the faces of numerous ESPN anchors filling the screen. “That’s like a greased up adult grizzly bear trying to make love to a fresh salmon.

“‘SportsCenter’ breaks down like this,” he continued. “Sixty percent Manziel gossip. Thirty-nine percent praising LeBron for buying a giant Brita filter to clean Lake Erie. Seventy-two percent jerking off the SEC. And 41 percent explaining away whatever crime an NFL player committed that hour. There’s two percent other, which is room for whomever has to fill in for Bill Simmons every time he’s suspended for having the audacity to defend women.

“ESPN’s 72 personalities – who have no personality – can somehow manage to exert enough force to climb all the way into the NFL’s as*hole,” Tosh ranted on. “Former athletes account for almost one-third of ESPN personalities. And with a grammatical error every fifth word a normal segment contains nearly 400 instances of flawed syntax. Simple mathematics tells us that is a statistical anomaly.”

Tosh saved the most hateful humor for last. “For a measly $5.64 billion dollars ESPN won the broadcasting rights to the college football playoffs for the next 12 years,” he said. “Zero dollars of that will go to the athletes. ESPN profits off kids playing football which means they support kids getting brain damage which means ESPN wants children to die. Or, to put it in scientific terms, ESPN loves killing kids.”

Tosh closed the segment on a calmer note. “For the record that was not aimed at Mike and Mike, Simmons, Beadle, ‘PTI,’ Le Batard,” he said, giving certain ESPN personalities a pass. “You guys are cool.”

I cannot recall ever hearing anyone take such pointed shots at ESPN on a comedy program or anywhere else. I’m sure Bristol is still buzzing about it.