Desus and Mero Kick It with President Obama 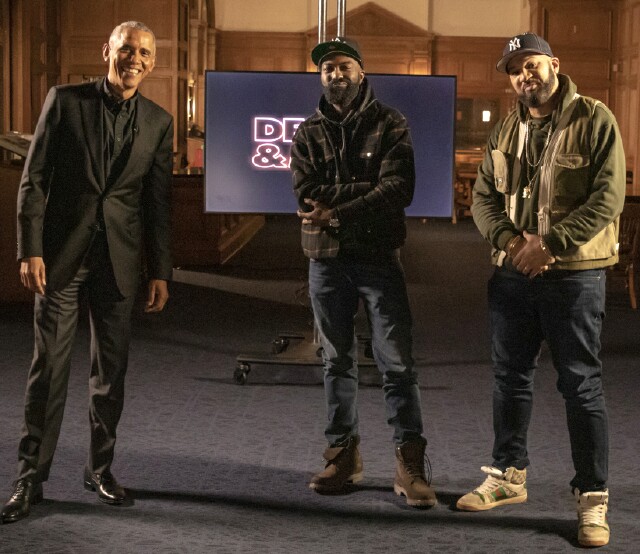 Say what you want about Barack Obama, but everyone knows that he was America’s coolest president. Combine that cool with the swaggiest, most down-to-earth late-night talk show hosts in the game, and what do you get? Maybe the dopest interview ever. I don’t know about all that, but New York’s own Desus Nice and The Kid Mero on the December 13 edition of their Showtime talk show spoke with Obama about his book, A Promised Land, the "tan suit scandal," how basketball is life, and young activism in the modern age. If nothing else, this exchange was a damn good time.

The interview took place in the historic Founders Library on the Howard University campus, and for those of us who have followed the careers of the Bodega Boys it was thrilling to watch. The guys looked to be sitting a solid 12 feet away from our 44th President, with the grandeur of the historic library filling the space between them. Obviously, COVID guidelines, as with every TV production these days, were being heavily followed. Anyone in that building that day was surely subjected to a test before entering the premises or getting anywhere near that space, and everyone in that room surely followed very specific protocols in order to allow Desus, Mero and America’s first Black president to converse without the hindrance of masks during their televised interview.

Now, these Bronx natives have never faked the funk a day in their lives but sitting in front of 44 himself was an obviously humbling experience. This explains the vaguely PG-13 nature of the language used throughout the almost thirty-minute interview, which featured nary a cuss or offensive word. The lack of adult language didn’t mean the guys weren’t being real, but there's a level of respect that obviously trumped the need to stay true to their usual form in that way. 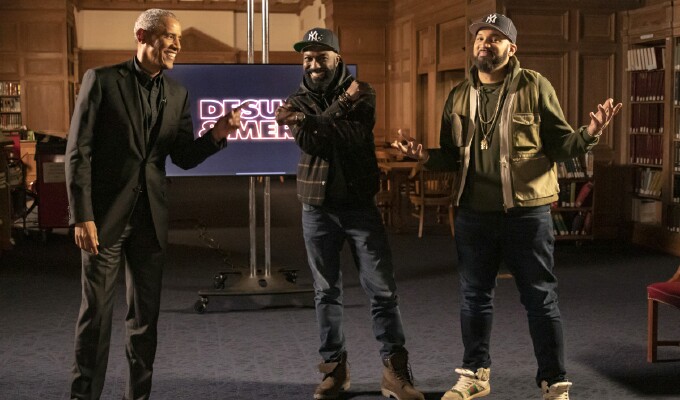 Speaking of their usual form, this interview marked a return to actual face-to-face interviews for Desus and Mero. In recent months they've done a great job (as have all talk show hosts) utilizing remote tech, green screens, etc. But seeing the Boys physically share that space with Obama was a thrill, and the nonchalant nature of the interview made it even better. This was three guys just kicking it in a room. Yes, there was a bunch of armed Secret Service dudes ready to pounce just off screen, but that just comes with the territory.

There was little Trump talk during this one, which felt oddly appropriate. In fact, The Obama Interview was less about the treachery of POTUS present and more about the hope born from POTUS past, plus the upcoming term of POTUS future Joe Biden. In truth, the interview wasn’t even all that political. Obama spent more time ragging on the guys about how sh*tty the Knicks are, and bigging himself up while they watched clips of him on the court.

Basketball was the true star of this little chat. While they were watching a clip of Obama playing basketball in Kokomo, Indiana, -- in which he gets his own rebound and finishes with a strong layup -- Desus hit him with a "I thought you said 'Kokomo.' I didn’t know it was 'Cook-em-all.'" The trio joked like that with each other throughout the interview. When it first began, Obama referenced a game D and M played against U.S. Senator Cory Booker (one that didn’t end well for them) and said, "Here's the good news. Looks like y'all could play for the Knicks." Burn!

There was a discussion of young activism, and what activists who are starting out should do while they’re coming up in this day and age. His advice? Use social media to initially make contact, and then bridge that gap with an in-person meet-up, "so it starts off as a virtual community, but then it becomes a real community." Of course, this is a method that would play out more safely after a return to "normal" life starts to take place – which a spit-balling Obama hypothesized could take anywhere from 3-6 months to a year – because by then, theoretically, there would be less risk of spreading the deadly COVID-19 virus.

The most interesting part of The Obama Interview was how the conversational styles of both the guys and their guest differed yet complimented each other. Were they interviewing Obama, or was he interviewing them? It kind of felt like watching two people who like to lead dancing with one another. Initially, Obama sat down and started asking the guys questions, which caused their convo to naturally progress in a direction that led to Desus and Mero’s questions. It could have felt like a tug of war, pace-wise, but the laidback nature of everyone on set (especially Obama) really came through, and at the end of the day it was another classic example of how the Bodega Boys can use their charisma and authenticity to get even the most high profile of guests to let their hair down around them, so to speak.

Desus and Mero is telecast Sunday at 11 p.m. on Showtime.The Obama Interviewwas telecast December 13 and is available now for streaming on various platforms.