"Desus & Mero": Is Bigger Better for the Bodega Boys? 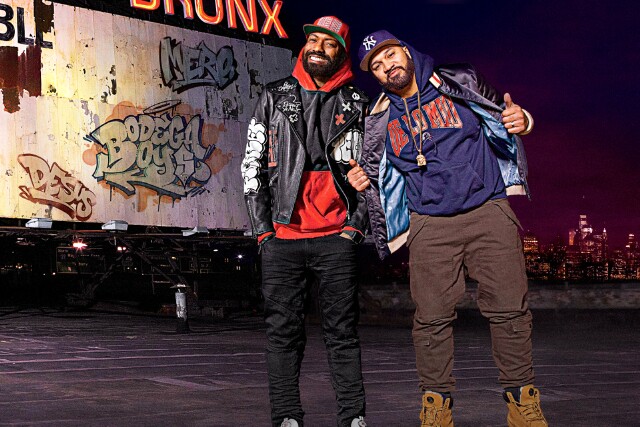 Daniel Baker, a.k.a. Desus Nice, and Joel “The Kid Mero” Martinez have come a long way from their days of Twitter and podcasts, and even though the “Bodega Boys” haven’t switched up on us throughout their illustrious career, the formats in which we receive their authentic New York flair definitely have.  Before the recent premiere of their new late night comedy series on Showtime, Desus & Mero, these Bronx-bred TV and internet personalities did just over 200 episodes of the identically titled Desus & Mero on Viceland -- a real “same beast, different animal” situation -- and while I love the new incarnation of the series, as a fan of the brand I can’t help but feel a couple things may have been lost in translation.

If you don’t know, Desus (top left) and Mero (top right) are two relatable, quintessential New York types from the Bronx who are proficient in humorous hot takes on everything from pop culture to politics.  Their quick wit and down-to-earth swag are the reason that, as they like to put it, “the brand is strong.”  I’m a huge fan of what they do, as I mentioned in my previous column about their work, and they’ve consistently brought a very raw, and for me, familiar New York voice to the pop culture personality game.  They also interview important people in sports, entertainment, and the media, as well as other public figures.

Like the transition from their weekly podcast on Complex, Desus vs. Mero, to their stint on Viceland, so is their transition from Viceland to Showtime.  There’s an overall streamlining of the previous formats, with an emphasis on visuals that reinforce that New York City/borough corner store feel that the guys are known for, being Bronx natives.  There’s also a lot of upgrading in both cases.  The Complex gig had a green screen backdrop and the duo sat on crates, then Viceland stepped them up to a modest studio, with a single table in the center, and the true centerpiece, the stuffed brown bear wearing Timberland boots and a fitted cap. Classic.  Now, Desus and Mero have a comparatively huge stage, a budget to blow and a studio audience to boot.

The point is while the guys themselves are still personally keeping it as real as they did from the jump, I think part of their brand’s appeal lies in how their product is delivered.  For example, in the iteration of the show where the two co-hosts sat together at a table, when they had a guest that person would sit between the two of them, forcing all three to not only be facing the camera all the time, but also to have to turn to back and forth to look at each other when talking.  It might not sound like an ideal arrangement, and it probably wasn’t, but there was a more communal feel; a togetherness even.  This, of course, is something I only became aware of recently when I noticed the new format’s placement of both Desus and Mero on one side of the set -- a (surprisingly nice) basement somewhere in New York -- with the guest in a chair sitting across from them.  In comparison, it feels a tad oppositional, however unintentional that might be.

As far as actual content goes, the shift in format has kind of affected that as well.  The previous version saw the topics in list form, each one hilariously tackled until the inevitable interview with an “illustrious guest.”  Thing is, their illustrious guest was usually sitting just off-screen, on a couch to the left, allowing them to occasionally chime in during the duo’s commentaries. Ambient laughter could also often be heard from behind the camera as well, as there was always a small crew, etc., in the room.  This gave it kind of an intimate effect, as if one was actually in the room listening to these people just shoot the shit about whatever clip they were watching or celeb they were flaming.

On the new show, both Desus and Mero sit on a stage in a couple of nice armchairs with a side table between them.  They do have a lot more space around them than before, and the set is nothing to put your nose up at, either, but Desus and Mero are able to do sketches now.  They’re also doing remotes.  They are literally out here in these streets.  There are also Chappelle Show-esque guest performances now, which is cool, but I don’t necessarily need them.

So, yes, with a bigger studio and a studio audience maybe some of that intimacy is gone, and yes, maybe all the rainbows have been replaced with neon signs (Google it), but ultimately I think we got the better end of the deal.  These two dudes are the real thing, and I love seeing minorities come up.  Anyway, so as long they keep winning, I feel like we all do, too.

Desus & Mero is telecast Thursdays at 11 p.m. on Showtime.