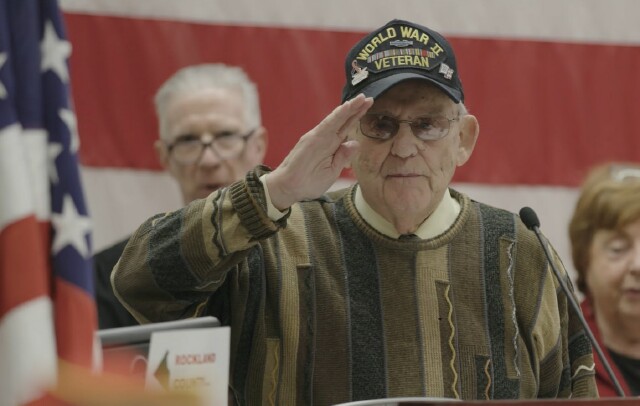 Soon, their voices will be silenced, which is why it is imperative to listen to them now.  That’s neither morbid nor melodramatic.  Instead, it's realistic given that the surviving soldiers who liberated Jews from the concentration camps are in their 90s.  Several who had long stayed quiet about their harrowing experiences reveal their stories in Liberation Heroes: The Last Eyewitnesses premiering on Discovery May 1, Holocaust Remembrance Day.

They bore witness to the worst of humanity, and even 74 years later what they saw continues to shock.  The old men and women, who relay their painful experiences in the 42-minute film, share that they had no idea what they would encounter in the camps.  It was so unspeakably awful that many of them chose to not talk of it and just go on with their lives.

As a member of the 66th Infantry, 71st Division, Alan Moskin (pictured at top) helped to liberate Gunskirchen Concentration Camp, a sub-camp of Mauthausen.  After the war he became a lawyer, raised a family and like so many survivors and their liberators he kept the haunting memories to himself until he started talking to schools a few years back.  Now he has told his story on film.

At a screening last week at Manhattan’s Paley Center, the audience rose as one when Moskin, who turns 93 in May, made his way to the stage.  Like the man he served under, General Patton, Moskin sloughs off the word “hero.”

“I never feel like a hero,” he told MediaVillage after the screening, even though people kept walking up to him to shake his hand and thank him.  “General Patton didn’t like the word.”

When he sees neo-Nazis marching through American streets, giving the Sieg Heil salute, he is disgusted.  And when kids deface property, Moskin maintained, “They don’t understand.  They think it is funny or a lark.  They don’t understand about swastikas in a cemetery.”

“I am very nervous about what is going on in the world today,” Moskin somberly continued.  “Hate begets hate.  I learned at an early age that people are more alike than different.”

It’s imperative that the world hears from those who were first on the scene and found the survivors, more dead than alive.  Their interviews are woven with news footage and personal photos showing them as dashing young soldiers.  The film tells the stories of men, and some women who were nurses, who still mist up at what they saw.  The USC Shoah Foundation, which Steven Spielberg created in 1994 to document witnesses to the Holocaust, had long aimed to present these stories.

June Beallor, a filmmaker and a founding executive director of the USC Shoah Foundation, said, "I have been wanting to tell this part for years.  It is one of the most accessible ways of telling the story.  They are everyday guys who were in Patton's Army, and they have a unique perspective.”

Discovery Inc. CEO David Zaslav and producer Andy Friendly sit on the board of the foundation.  The film features Andy’s father, the late Fred Friendly, a master sergeant in the Army who covered the liberation of Mauthausen.  Friendly, who later became president of CBS News and with colleague Edward R. Murrow created the documentary TV show, is filmed reading a letter he wrote to his mother.

"Before I leave Europe, I must write this letter and attempt to convey to you that which I saw, felt and gasped at," Friendly wrote.  "This was Mauthausen. Your flesh and blood saw this.  This was no movie."

In the May 5, 1945 letter, Friendly explains how this concentration camp complex was built from rocks Jews were forced to carry up 285 steps, covered with blood.  Just this past week the Friendly family read the letter at their Seder, as Jews recount the story of Exodus and why freedom must be fought for in each generation.  Friendly’s scenes are poignant in a documentary, which by necessity is filled with many gut-wrenching moments.

It also does an excellent job of placing this chapter of history in context, reminding viewers that Hitler and FDR came to power within a few weeks of each other, and how the U.S. ignored the war until Dec. 7, 1941.  Liberation Heroesalso reminds us that Hitler was going to make Germany great again.  The parallels to today’s rampant anti-Semitism, homophobia and xenophobia are inescapable.

“I am so upset by what is going on in the world and the rise of anti-Semitism and xenophobia,” Friendly said.  “We never thought it could happen again, but it is.  There is so much hate, and it is raised to a level that is truly dangerous.  If Alan can say and do [this] at 93, and we have an opportunity to tell it on Discovery, we need to take that opportunity.”

As for Moskin, he plans to continue wearing his World War II Veteran cap and warning of the dangers of hate.  He wants people to listen to him and colleagues who stared at what remains of people after genocide.  “When we are gone, I am really afraid they will come out of the woodwork,” Moskin said of anti-Semites.  “They are the last generation who will hear us.”

Liberation Heroes ensures future generations will hear them as well, and all but begs us to heed their words.