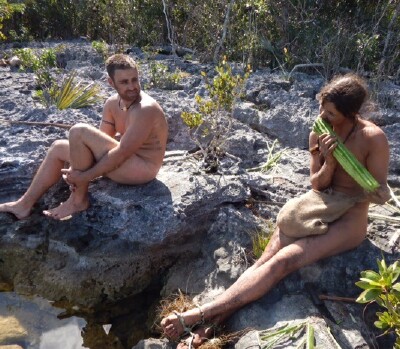 Beverly Hills, CA – Discovery Communications has so dramatically expanded its portfolio of networks in recent years that one never really knows what to expect from its presentations at Television Critics Association tours. Its morning-long block of press sessions yesterday was no exception.

First up was a panel for Discovery Channel's hit series Naked and Afraid. This was quite a departure from the usual science, history and nature driven programming the Discovery mother-ship has a reputation for offering at TCA tours.

It may not have been as inspiring or informative a panel as Discovery's usual fare, but Naked proved to be of significant interest to the critics and reporters gathered here for the Summer 2014 tour. This is a hot show – one that is so popular it has inspired other cable networks to develop series about unclothed people doing all kinds of things. When introducing the panel, Eileen O'Neill, Group President of Discovery Channel, Science Channel and Velocity, said that Naked and Afraid "holds the record for the most watched series premiere on Discovery Channel ever" and attracted over 4 million viewers last summer during its first season.

Among the interesting facts revealed during the Q&A with the show's producers and four people who have appeared on it (two of whom, Justin Bullard and Dani Julien, are pictured above) is that the male participants would prefer that the pixilation used to blur out their naughty bits be somewhat bigger than that which is shown on screen.

Also, the survivalists, as the participants are known, prepare for their time in the jungle areas where most episodes of Naked are filmed by gaining weight (so they can live off their body fat, at least for a while) and walking around barefoot to toughen up the bottoms of their feet.

As it happens, the men and women selected to undergo the ordeal of being made to fend for themselves and travel to a specific destination over a period of twenty-one days without benefit of food, clothing or shelter – while cameras document their every move from every angle – already have honed certain physical and survival skills. Some journalists in the room, myself included, naively thought that the folks who participate in the show are just everyday people who are willingly thrown into extraordinary situations. That's not the case.

"We are casting the best of the best," said executive producer David Garfinkle. "These people are all survival experts. If they are not experts, they don't get on the show. There's no recklessness that way."

The first priority, noted Steven Rankin, another executive producer of the show, is determining that the survivalists "can actually survive 21 days in the location … because if they can't do it then they fail, and we don't want people to fail on the show." There are other questions that must be answered, he said. "Have they got the mental strength? Have they got the emotional fortitude to deal with it? Have they got the physical strength and physical capabilities of getting through the 21 days of deprivation? All of those standards, we rigorously apply through our casting process, final vetting and selection."

The surprises about Naked and Afraid kept on coming. For example, Garfinkle informed TCA members that it is a popular family show. "We never intended this to be an exploitive show," he asserted. "This is a family show. Families all around the country, all around the world, are watching this show because it's not about the nudity. It's about the survival, and it's really a relationship show between a man and a woman."

"I think that if we were to [focus on the nudity] and take that approach this show would be very short lived, and I think it would have a very narrow viewership. This show we are hoping will last a long, long time because of the authenticity of the experience and the journey that we are trying and the stories we are trying to tell."

There is no reward (cash or otherwise) for completing the challenge at hand on this show, but that doesn't seem to deter the participants. "The number one reward of this show was the pride that we got from completing t

he challenge," Zausch said. "It was the feeling on Day 21 when we were rescued; it was absolutely the best day of our [lives]. That's why we did this challenge."

The Naked panel was a tough act to follow, but Discovery Communications continued its morning with panels that proved similarly popular. One was for Animal Planet's heartfelt and fascinating Pitbulls & Parolees (which is about to begin its ninth season), about a heroic woman named Tia Torres (who insisted she is not a "hero")

who has devoted her life to rescuing and caring for unwanted pit bulls and to giving jobs to parolees who are trying to get their lives back on track.

Another standout was a session for the true-crime based miniseries Heartbreakers that will debut in August on Investigation Discovery. Television stars from yesteryear, including Kevin Sorbo (Hercules), Christopher Knight (The Brady Bunch) and Tracey Gold (Growing Pains), star in dramas that re-enact true stories of murder and other criminal behavior produced in a style that is deliberately campy. Watching clips from these programs, I realized that never in 25 years of TCA tours have I heard reporters and critics laughing at programs about real-life murders. I think that was the response ID executives had been hoping to receive.