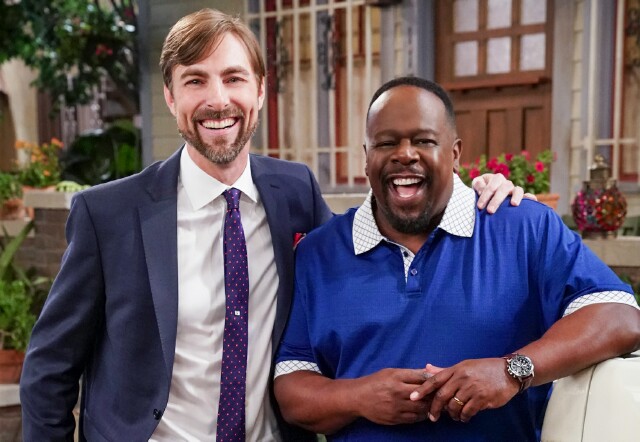 Two of CBS’ big-swing freshmen series, the sitcom The Neighborhood and the spiritual drama God Friended Me, recently received well-deserved early second season renewals.  Although the shows are very different, they have successfully broached such subjects as gentrification and religion through the lens of diversity and inclusion, garnering significant viewership in the process.  The Neighborhood averages 8 million viewers weekly, while God Friended Me averages 10 million.

CBS appears not only to have listened to the ongoing conversation about on-screen representation of all people, but to have made changes behind the scenes, as well, with both shows having very diverse creative teams.  “A couple of years ago we committed to doing a better job on the diversity front and that informed a lot of our development and casting,” explained CBS Entertainment President Kelly Kahl in an exclusive interview with MediaVillage.  “The thing about The Neighborhood and God Friended Me is they weren't just about being diverse shows.  It was, here are two interesting shows with pertinent things to say about what's going on in the world today.

“The Neighborhood addresses some of the divisiveness out there and shows a path for people to be able to come together and talk about their differences," Kahl continued.  "It's not homework, it's funny; and if it's not then it is not a good show.  We have a fantastic cast and producers who every week come together and hit these issues in an entertaining way.  Beyond that, it's authentic.  Diversity goes beyond the casting to the writing staff.  Oddly enough, these are things that CBS was doing in the '70s with All in the Family, The Jeffersons and Maude.  These were topics being addressed then, and not a lot of shows have addressed since.”

“Right now, we live in a time when there are a lot of forces trying to divide us and tell us as a country, and a planet, how different we are to one another,” explained Jim Reynolds, executive producer, creator and showrunner of The Neighborhood, who based the show on an experience from his own life.  (He is pictured above, left, with series star and executive producer Cedric the Entertainer.)  “Our goal is to discuss and honor some of the ways we are different, with an emphasis on how we are probably more alike than not.  I believe audiences are responding because kindness, positivity and hope are underlying themes of our show, and that's in contrast to what we are saturated with on a daily basis.

“Initially the show did skew more closely to my experience of moving to a diverse neighborhood,” he added.  “But as Cedric got involved, it evolved.  Cedric brought a perspective and insight into the characters, and [especially] the Calvin character, that I couldn’t have as a white man moving into a black neighborhood.  So, the focus of the show shifted to be more of a two-hander and it definitely [shifted] away from my experience, although a lot of the characters are drawn from people in my life.”  (Pictured below, left to right, are Neighborhood cast members Sheaun McKinney, Marcel Spears, Tichina Arnold, Cedric the Entertainer, Max Greenfield, Hank Greenspan and Beth Behrs.) 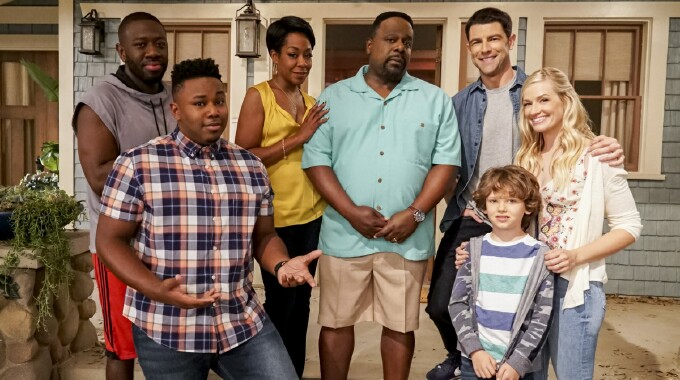 “Tonally the show became very different,” Cedric told MediaVillage.  “The main thing is, Jim was very passionate about the idea because it was true to his life experience.  His assumption was all things [he wrote about] black people were true because he thought them to be true.  I was like, ‘No, you have to make sure the black person's point of view is clear to the black person and not what the white person thinks a black person thinks.’  That was one of the things I felt was off-message early on, so Jim and I worked together in that process.  I think that's where we found that two points of view could meet in the middle and in that you have a show; not where the white and black guys are written by the white guy.

“You can't be right about all of them,” he continued.  “That's where we realized Calvin has this skewed point of view that wasn’t strictly about race.  Like a lot of people, he [judged] people on a number of different things.”

“Cedric is my closest partner creatively,” said Reynolds.  “I always listen to him and always want to know what his point of view is because at the show’s center its success rides on his confidence and his feeling about something.  It's important that I communicate openly with him to make sure he's comfortable and we're getting it right from his point of view.”

For The Neighborhood, having a mix of voices behind the scenes was of paramount importance to the storytelling.  “If you look at our writers room we are atypical of what is commonly a writers room,” noted Reynolds. “We are well represented and I'm really proud of that as I believe that lends to the authenticity of the show.”

“Diversity behind the scenes we felt was important -- and to create opportunities,” added Cedric.  “We wanted all the voices in the room to be heard and to make sure the stories told represented the people that actually lived them.  All ages, ethnicities, genders, sexual preferences -- all those things are in that room and that's what we wanted to have represented in a way that feels really good.”

That sentiment is shared by God Friended Me star Brandon Micheal Hall, who told MediaVillage, “When I initially sat down with [our creators] Bryan Wynbrandt and Steven Lilien I asked them how diverse the writers room would be.  It shows in the scripts; how much they listen to us on and off the screen.  As the scripts keep developing it's more clear who they are specifically writing for and there have been times reading a script when I've said, ‘Hey, this is a conversation we had recently.’  They weave them in so well.  The room is diverse and everyone in there is talented.”  (Hall has more to say about the show in this interview.) 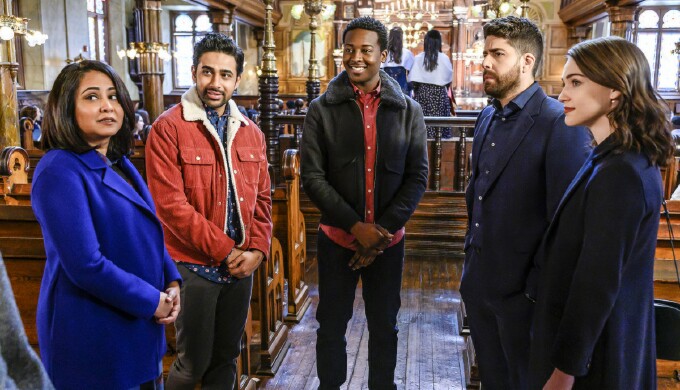 “I think people responded to GFM as it gives them a sense of hope and optimism at a time in our country, and world, when a sense of that is lacking,” Wynbrandt asserted.  “If you turn on the news it feels everyone is on opposite ends of the spectrum.  Our show tries to bridge that.  Diversity-wise, the show reflects the world we live in honestly and realistically.  People from all walks can tune in and see themselves.  We believe that’s important and necessary, especially in television, as its role has always been to reflect the current state of world affairs.

“[The response] is more positive than negative,” added Lilien.  “Tackling religion can be polarizing.  Our episode with a Muslim and Jewish couple who wanted to marry showed the conversation from both sides -- episodes like that are important.”  (Pictured above, left to right, are GFM cast members Parminder Nagra, Suraj Sharma, Brandon Micheal Hall, Adam Goldberg and Violett Beane.)

As The Neighborhood looks to become even more diverse in season two, and God Friended Me opens new chapters in its characters lives in their second season, CBS is delighted these stories will continue to unfold.  “The gratifying thing is that for most shows season one is about survival,” said Kahl.  “These shows found their voices very quickly, which doesn't mean they can't improve in season two.  They figured out who they were and delivered consistent and terrific episodes, and picked up the pace throughout their seasons, which is a really tall order for most shows.”