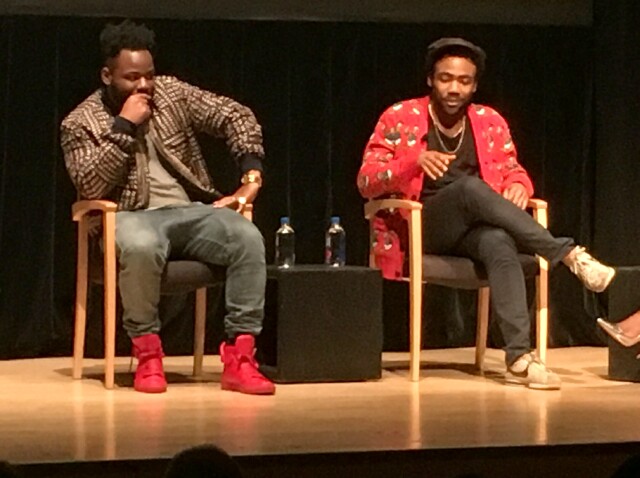 “Our drug dealer knows more about television because all he does is watch television,” Donald Glover told the audience at a recent New York City screening for Emmy voters of his FX comedy Atlanta.  “He said, ‘If you do a show make sure its tight like Clapping for the Wrong Reasons,’” a short 2013 film Glover wrote and starred in.  “Like [my brother] Steven always says, let’s make something that people can’t see normally.  That’s the only way you can really fight with the Internet or anything now.  With all these screens, why are people coming to you?”  He was talking about figuring out how to make a show that was special, and while he was happy to give his dealer credit for some valuable advice, Steven was even quicker to add that the guy is just their “weed” dealer.

Steven (pictured top left), who is also a writer and story editor on the show, joined Donald (top right), director Hiro Murai and executive producers Paul Simms and Diane McGunigle for a question and answer session moderated by journalist Lola Ogunnaike after the screening of two episodes for the appreciative and responsive crowd.

When Lola noted that much of the praise for the show has centered on the idea that it makes people feel “what it’s like to be black,” Donald drew a surprising comparison to another series that was a phenomenon in its day.

“The cool thing about The Sopranos that I always liked was you got to live with these characters for a long, long time,” he said.  “They’re not great people, but you really understand their point of view.  Part of the [reason] why black people are a commodity in this country is you never really have to understand their point of view.  You never are forced to be them for that long.  Like, black people are trendy right now.  They’re not going to be trendy in two years.”  [Editor’s note: Donald used air quotes when he said the word “trendy.”] 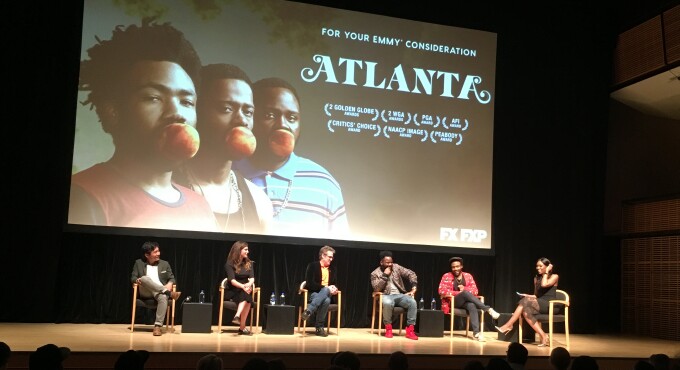 Donald gave much of the credit for the look and tone of the show to his director, Hiro Murai (above, left), who had never worked in television but had an extensive background in music video production, including videos by Donald’s alter-ego, singer and musician Childish Gambino.  “Hiro knew how things needed to feel,” Donald explained.  “Even us being able to talk in close up.  I grew up on the Internet, [where] if something real is going down it’s on a shitty camera and it’s far away.  I’ve seen awful crazy shit and it’s never close up.  It’s always very far away.  I feel that’s something he captures.  It’s like far away but very intimate.

“We’ve got me saying a lot of shit in the show,” he continued.  “I was going to be saying stuff that I knew was going to be upsetting or weird and it needed to feel like somebody delicate was with it.  I knew Hiro would do that.”

“The show wouldn’t be what it is today if it didn’t look as good as it does,” Steven added.

Representation was at the center of the team’s determination to put together a distinctive show.  “We would talk in the writers’ room about how the hood never gets to feel classy,” Donald recalled.  “We were talking back and forth with FX about the music we wanted for it; at one point we wanted Barbra Streisand; like the live version of a Barbra Streisand song.  You watch The Sopranos and they’re shady people; Italian-by-the-seashore-type people, ‘fuck you, fuck you’ -- but they get to say, ‘That’s our life.  This is how we see it.  We have a culture and it’s important.  That culture is influential.’

“We never really get to own that,” he continued.  “It’s never really shown.  My parents grew up in the Bronx.  They love that shit.  But they never get to see themselves and see how beautiful and cool that is.”

Not everything about life in the ATL as seen in Atlanta is beautiful and cool, of course, including violence and murder.  “We were at a club, in the parking lot talking,” Donald recalled.  “One of our writers was there.  He was talking to a girl, and then someone got shot.  Cop shot this guy.  Everybody starts running, but he’s still talking to this girl.  I read a lot about how people talk about [our season finale], how poignant it was, to not have them react to the killing.  We didn’t do that on purpose; that’s just how it is.  People die in front of you, and you deal.

“That’s what being black in Atlanta feels like,” he added.  “You have to laugh at it or else it’s very sad, and it feels like, what’s the point of it all if you can’t look at it like it’s funny?  Because crazy shit happens.”

The panelists made clear that it is impossible to separate talk about the show with commentary on the title city itself.  “A lot of people have an idea of what it is like,” Steven said.  “There are many sides of Atlanta.  People call it the New York of the south.  But then people from New York go to Atlanta and say, ‘What the hell is this?’  We’re still a country place.  You’re not going to get that feeling in LA.”

“It’s also black Hollywood, you know?” Donald chimed in.  “That’s where people who make money go to spend their money.  It’s cheaper to buy a house.  A lot of celebrities live there.  It’s all these mashing things coming together in one place.  It’s a very specific place.  The way that religion and gender and blackness and sexuality and everything, the way it all comes together, it’s not like that anywhere else.

“I love the prison scene in the second episode,” he continued.  “That is so specific to Atlanta.  Just the fact that you have all those people together [in a holding room] and they just have to deal with each other.  They’re all in ‘adult time out,’ which is jail.  We all gotta eat from the same pot.”

As for the show’s liberal and unprecedented use of the N word, and the potential for blowback from the network’s standards and practices department, Donald said, “Everybody has their cards.  My card is, you guys want this to be cool or not?  This is going to be cool.  I’m telling you!  If we’re going to compete with the Internet why would anybody watch something that is not authentic?  If you’re going to take out all the curse words, take out all the real shit, then I’m going to watch something real on the Internet.  We’re fighting the Internet.”

It’s all about keeping it real, in every way.   “We always talk about this,” Hiro said.  “We want things to be ambiguous and uncertain.  Especially in comedy on TV, things have to be black and white.  There’s a safety net where you know nothing really bad is going to happen to the characters; at the end of the episode it’s just going to re-set.  From the very beginning we always wanted Atlanta to be a show where anything can happen.  It can go in any direction.  A sense of tension in the background was important.”