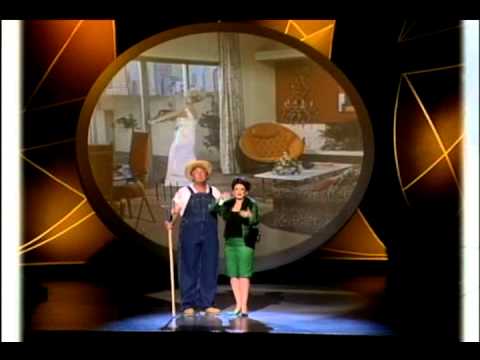 It has long been said that Bill Clinton's popularity with the voting public began to soar when he played his saxophone of "The Arsenio Hall Show." (You can see that video below.) That was in June, 1992. Six months later he was elected the 42nd President of the United States, which begs the question: When it comes to presidential elections, does music make the heart grow fonder? In the case of current presidential front-runner Donald Trump, probably not.

The video above is of one of Trump's most memorable musical performances ... the time he sang the theme song to the classic sitcom "Green Acres" with Megan Mullally on the 2006 Emmy Awards ... back when Trump was known only as a billionaire businessman, a best-selling author and the star and producer of NBC's "The Apprentice." Watch the video and marvel at the love and enthusiasm the audience of Hollywood elites has for the man. (What a difference a decade can make.) For what it's worth, the opening song of "Green Acres" is my second favorite of all time. No. 1 is "Love is All Around" from "The Mary Tyler Moore Show." No. 3 is "Woke Up This Morning" from "The Sopranos." No. 4 is the opening song from "Phyliss." For real. Broadcast television really suffered when network executives decided to largely eliminate theme songs.

One can't compare Trump's singing here to Clinton's gifts with the saxophone, in part because Trump sang this song ten years ago, and also because he cannot sing. Another look at (and listen to) the pardoy of Drake's "Hotline Bling" (below) from Trump's gig as host of NBC's "Saturday Night Live" last fall (his second time at bat) indicates that his vocal abilities have not improved over time. But in both cases he deserves props for being a good sport.

If they were engaged in a music competition this Clinton would be the clear winner. Here's his legendary appearance on "Arsenio."