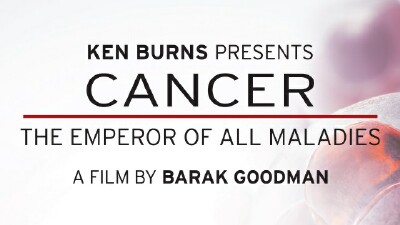 Editor's Note: Ken Burns' "Cancer: The Emperor of All Maladies," one of the two documentaries discussed in this February column, premieres tonight (March 30) on PBS. Check local listings for times.

The Winter 2015 Television Critics Association tour ended several weeks ago, but I find that out of the dozens of series and specials previewed by the press that two programs have remained top of mind. They both concern matters of life and death, and they are both on PBS.

The first is “Being Mortal,” an edition of “Frontline” directed and produced by Tom Jennings that will make its debut on Tuesday February 10. It explores the ways in which the medical profession helps sick people and their loved ones deal with terminal illness. The second has a much longer title, one with an instantly recognizable name in it that commands immediate attention: “Ken Burns Presents Cancer: The Emperor of All Maladies.” This six-hour, three-part film will be telecast on March 30 and 31 and April 1.

The majority of TCA panels – which typically number 125-150 per tour – focus on entertainment programming with a few documentary and news-style shows in the mix, almost all of them of great interest. But very few drill directly down into the lives of everybody in the room – and beyond -- in the way these two did. We are all going to die, and every one of us will be touched by cancer. As actress Valerie Harper has said repeatedly throughout her battle with a rare form of cancer that she was told would claim her life two years ago, “We’re all terminal.” The subject matter of TCA sessions rarely gets more powerful or intimate than that.

“Being Mortal” takes its name from a recent book by author, surgeon and Harvard Medical School professor Dr. Atul Gawande, who is also one of the most impactful speakers I have ever heard at a TCA panel. The intent of the book and the program is to break down barriers between doctors and their critically ill patients when it comes to discussing matters of mortality, end-of-life care, the duration of treatment and ways in which they can make the most out of the time they have left. Gawande’s keen understanding of the issues at hand and the calming, reassuring way in which he addresses people make “Being Mortal” much more than just another news special or documentary about dying.

“We come into medical training interested in learning how to fix things,” he continued. “We want to know the diseases and then what to do to reverse them.” Now that he is a teacher, Gawande suggested that the situation isn’t very different today, though change is in the wind. Once he became a doctor he realized that “a large percentage of my practice was managing people with unfixable problems -- the process of aging, chronic illness, terminal illness, and how that unfolds. Even though we have an aging population, 97 percent of medical students do not receive geriatrics training. It’s not even part of the curriculum. We have fewer geriatricians being trained today than we did ten years ago.”

"It can really be life changing, as we show in the film," he said. "Just those questions can end up making clear in a family what they want to demand and where they draw their lines. Also doctors are learning those skills and beginning to ask those questions.”

Ken Burns was similarly engrossing during the panel for “Cancer: The Emperor of All Maladies,” which is also inspired by a book with the same title, this one written by Siddhartha Mukherjee, M.D., Ph. D., who joined Burns for the session along with producer and director Barak Goodman. The book and the film trace the history of cancer from early documented cases thousands of years ago to the present day.

Burns, Mukherjee and Goodman all made important points about the war against cancer and the toll it has taken and continues to take on humanity, as well as the amazing advances that have been made. But the most startling information came from Mukherjee after he was asked about research funding. “There is a gigantic funding crisis in cancer and in research in general in the United States,” he said. “In real dollars the United States is suffering a 10 to 20 percent, if not 30 percent cut in cancer research funding. We are not going to solve the problem of cancer -- whether it be prevention, treatment, or cure -- we’re not going to solve any problem of cancer by doing less research.

“We understand the disease in a way we didn’t understand ten years ago,” he continued. “The National Institute of Health and the National Cancer Institute and organizations like Stand Up for Cancer are doing a phenomenal job. They are moving at twice the speed just to stay in the same place. The budget sequester has cost us a vast drain of cancer resources. I can speak very personally. I cannot maintain the smartest brains in my laboratory. These are people whose discoveries will impact your life, I promise you, in a more direct way than if they went to Wall Street or they went to do some other form of work. They have little interest in continuing in an environment where they can’t do their work. If you make it impossible to do work in cancer research, you won’t get the work done. And we will pay.”

“This is happening at precisely the moment when we are poised to make the greatest advances in probably the history of cancer because of the knowledge that’s been accumulated over the last few decades,” Goodman added. “So just at the moment where it’s ready to explode, there is this catastrophic cut in funding.”

“You know, we think that cancer research is expensive,” Mukherjee said. “It’s not expensive at all, actually. If you take the entire budget of the NIH and the NCI, it’s on the order of tens of billions of dollars, which you might think is a big number. In fact, for the United States that is a tiny number. It is a number so insignificant that you could really push it aside. It cost more for air conditioning during the Gulf wars than it costs for the entire budget of the NIH, the NCI and the CDC combined.”