In “Down with David,” a Straight Dancer Scores in the Gay Bars of West Hollywood 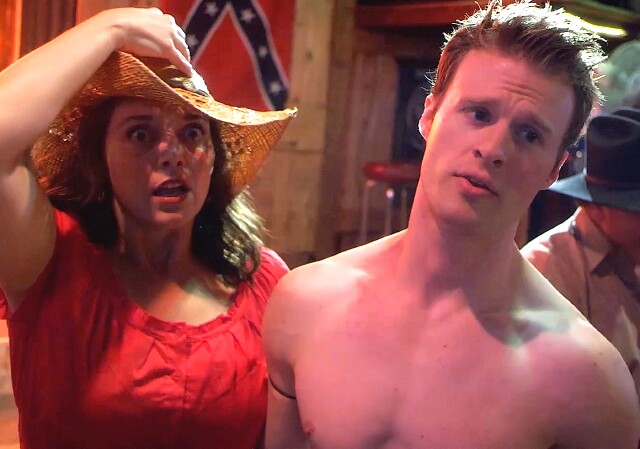 Smart, sexy, rude and raunchy, the six-part Web series Down with David is an abrasively funny and painfully profound study of single young people struggling to start their lives in the uniquely corrosive environment known as Hollywood, where souls are expendable, dignity is negotiable and rejection is the order of the day.  To assert that it evokes thoughts of “I Hope They Serve Beer in Hell” and “Magic Mike” as filtered through the sensibility of a young Woody Allen would not be too far off the mark.

Based largely on the adult life of its creator and writer Derek Nelson (pictured at top) – a struggling actor in Los Angeles who supports himself by dancing in gay bars and working as a doorman at female strip clubs – David dives into familiar territory (love, sex, romance, friendship, career) in consistently unfamiliar ways. The result is something entirely new that addresses some of the oldest concerns of modern man: self-worth, self-doubt, self-loathing, the arrogance of toxic masculinity and the politics of sexuality. 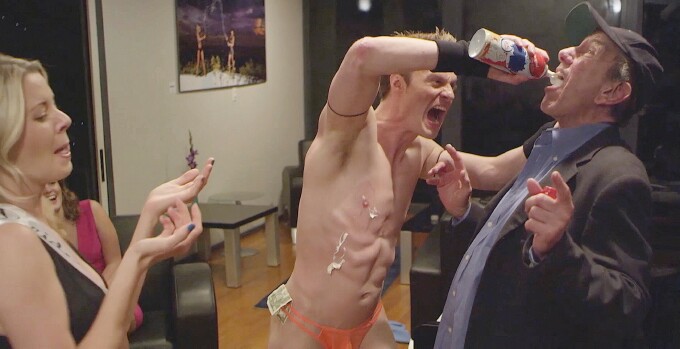 In recent years Nelson was forced to confront all of the above questions and more, finding answers that were as surprising as they were life-affirming. When he made the decision to move to Los Angeles from a small town in Pennsylvania, where he stood out as a big fish in a small pond, only to land in a painfully crowded fishbowl filled with guys just like him, he was suddenly made to feel that he wasn’t so special after all. He learned the hard way that show business is littered with broken young people who thought all they had to do was show up in order to launch a career.  Perpetual rejection and deep despair followed. His sex life suffered, too:  Despite his good looks, the girls he met weren’t interested in getting with anyone who couldn’t do something for them or at the very least show them an expensive good time.

Before long he was sleeping on the street.  The story of how he turned his life around by becoming a dancer in the gay bars of West Hollywood – which put money in his banana hammock and women in his bed – is a surprisingly insightful study of human emotion, unwavering ambition and the challenge of navigating the terrible twenties.  It is also a very funny look at human foibles.  We must all seek to identify and improve our weaknesses on the road to maturity. David certainly does, and it couldn’t happen to a “nicer” guy.

Indeed, it’s a good thing David’s life is so far from perfect or viewers might not be able to get past the fact that he can be a giant douche with the ladies.  Even though he frequently shows off his well-toned body in its near-entirety (there is no full frontal nudity in this production, though it leaves little to the imagination), Nelson has smartly seen to it that David will never be dismissed as a vanity project.  We might really detest this guy if he didn’t suffer so much in ways so embarrassing we can’t help but feel for him and, perhaps, feel a little better about ourselves at the same time.  (This is especially true in the sixth and final episode, when things get catastrophically messy. You may hate yourself for laughing.) 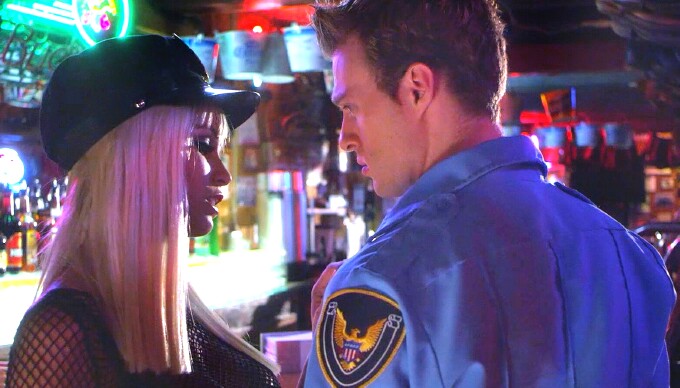 Nelson’s co-stars in Down with David include Starlog founder Kerry O’Quinn (pictured below with Nelson), Nathan E. Wheeler and Stephanie Koenig, along with Mindy Robinson, Tawnie Jaclyn, Katelynn Ansari and Alie Craig.

Down with David requires less than an hour for a full binge.  That may be true of most Web series, but few of them feel (and look) so much like a feature film or, to be more contemporary about it, a truncated Amazon series. Nelson imagines it being reworked one day as a full-length movie. That isn’t a bad idea, but it works just fine as it is. If anything, it leaves one with an urge to follow the further adventures of its characters in an ongoing serialized format. 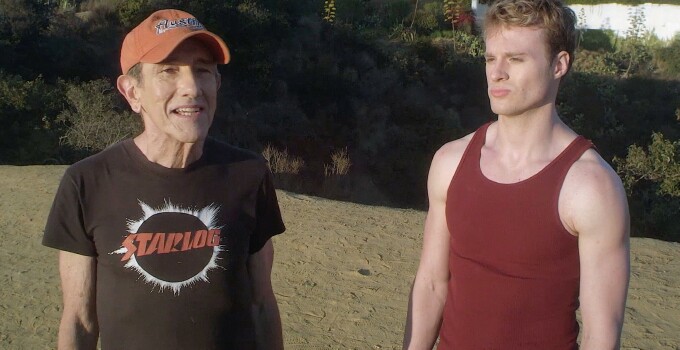 If David provides an accurate indication, Nelson has a lot more on his mind than becoming just another instant video star, many of whom achieve their outsize success primarily by looking good on camera and sharing their innermost thoughts without going so deep as to force their young viewers to contemplate their own lives or give themselves headaches thinking about the world beyond their own social platforms.  Nelson, on the other hand, has put it all out there in David, sharing his own distinctive story in a way that might encourage others to at least think about their own, if not share them with others.  He is plainly a gifted filmmaker, and like so many today he is fortunate that technology has provided him with the means to call attention to his talents.

Nelson recently completed another short film titled Belles of the Boulevard. His co-star is another ambitious video maker, Nikki Baker, best known for her hugely popular YouTube channel Pranksters in Love, in which Nikki and her husband play outrageous pranks on each other -- going to more and more extremes each time.