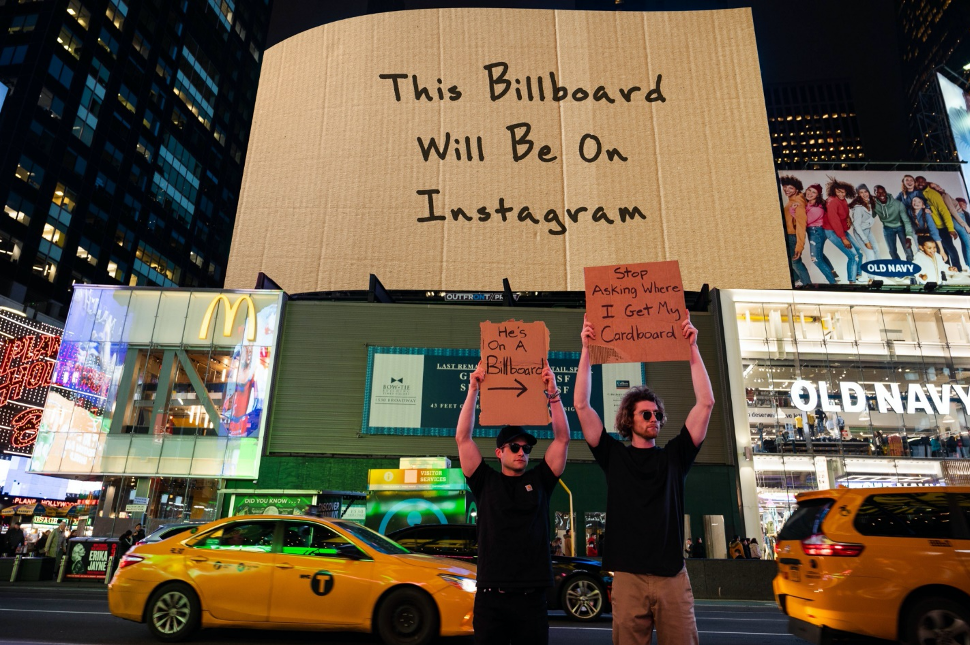 Have you heard of @DudeWithSign on Instagram? If you're not one of his 5.8 million followers, you might've walked by him standing on a street corner in SoHo, seen him on TheEllenShow or Jimmy Fallon, in a meme, or somewhere else by now. If your answer is still no, welcome to 2020.

"I've been working with [the FJerry LLC team] for the past eight months and, initially, was working on original content for their Instagram, when Elliot [FJerry's founder] came up with the idea to stand in the street to protest something funny [on a cardboard sign]," Phillips explained. "We riffed around and came up with 'Stop Replying-All to Company-Wide Emails' and it took off."

Overnight, the post was shared everywhere and the F*ckjerry team quickly realized they had more than just a funny response. A few weeks later, while sitting at his desk, Phillips came up with the Instagram handle @DudeWithSign, and the rest is history.

What Phillips realized here is what I call the "IRL to URL effect" — when we make something in real life (IRL) that is so catchy it organically makes its way into the online world (URL). When you nail the IRL messaging with simplicity, the online part comes easy, and with big amplification metrics.

The second post ever on @DudeWithSign was replying IRL to a billboard for Friends. This is when it first struck me to start comparing what he was doing to the impact a single billboard can have. His subtle protest of the message on the Friends billboard stirred up more attention than anything else could have. For example, a Reddit thread could get lost in the chaos and have zero impact; but standing in front of the Friends billboard with a simple message written in Sharpie reading, "Seinfeld is way better than Friends" made for a larger impact.

As @DudeWithSign, Phillips is creating social content so simple and relatable that you have no choice other than to follow him to find out what he will say next. 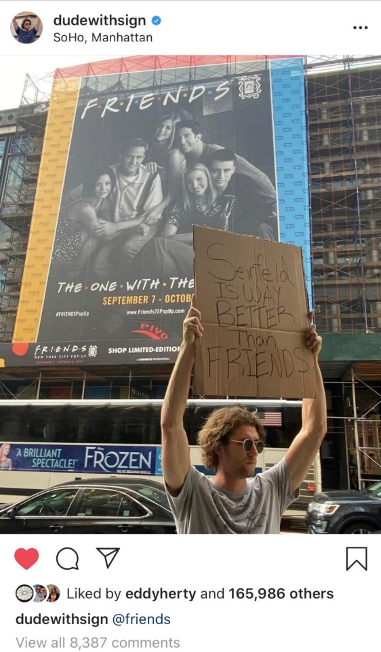 When @DudeWithSign is standing outside for "sometimes days, sometimes hours, sometimes minutes," maybe only a few hundred people walk by him in the time he is standing there, but how about the additional 5.7+ million Instagram followers seeing the post, too? The impact offline is amplified online by millions. This is something both large and small brands can learn from.

If you look at what Phillips as @dudewithsign is doing and compare it to what OUTFRONT Media does with out-of-home (OOH) advertising, it's not all that different. Reaching over 70 percent of Americans through more than 500,000 out-of-home (IRL) displays on a weekly basis is just the start. Additionally, through social media, we (and our clients) receive earned impressions from social users sharing pictures and videos of the advertisements. According to a 2019 Nielson study, one in four Americans posted an out-of-home advertisement to their Instagram feed or story.

This statistic is one of the many reasons why brands use out-of-home: to give people the opportunity to create social content. Off-White, Pepsi, and Spotify are a few brands that have created content for consumers that really do this well. In 2019, Spotify reached over 500 million listeners on Instagram for New Music Fridayby using a billboard in New York's Times Square. Just this week, Lady Gaga announced her newest single with a billboard posted to her Instagram account and received over 750,000 social engagements. With one billboard in New York's SoHo area, Virgil Abloh's fashion brand, Off-White, reached over 16.5 million people on Instagram.

Even though the OOH world has been living IRL long before iPhones could take pictures and before Instagram was a platform to share moments on, we are now seeing the amplification factor for ourselves. No individual has achieved what @DudeWithSign and these brands have accomplished, and that's why it's so effective.

"I think it's just a different and new way to express something," Phillips said. "Maybe it's the different elements of the account that add to the humor: the fact that I keep a straight face the entire time as if it's a serious issue, or the mystery behind the shades, or me actually being outside holding [the sign] up to real people who are just going about their day." 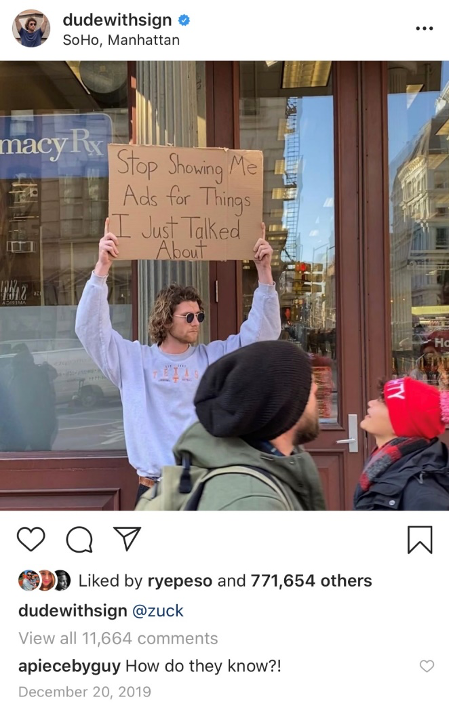 "Keep it simple," is a phrase I throw around a ton in my office when it comes to a creative approach. Our attention span as consumers is getting shorter and shorter, and advertisers need to start simplifying to be effective. It should almost be easier (and cheaper!) to come up with something that will get consumers' attention. Brands should take a page out of @DudeWithSign's book and draw attention with a simple and original out-of-home tactic.

"I don't know how it got so huge, to be honest. I definitely wasn't expecting to get as much attention as it has," Phillips said.

Working in the out-of-home industry, it comes as no shock that his account exploded. The creative strategy Phillips uses is one we think about every day: Putting the right message in the right places and reaching the right people has serious amplification power. No other medium receives as much earned media as out-of-home. According to Nielson's study, OOH generated four times more online activations per ad dollar spent compared to all other media.

Good creative has the ability to span both IRL and URL, and @DudeWithSign has mastered this.

OUTFRONT Studios, our boutique in-house creative agency, understands this better than anyone else in the industry. Less is more — and when the creative is done correctly, you earn not only IRL "likes," but also online and social media impressions.

"We mainly want to keep the signs funny," said Phillips. "I don't want to hold a boring sign that says, 'Buy this product and call blah blah for a limited-time deal.'"

"It can be difficult sometimes," he said when explaining the importance of knowing your audience. "I tried a post that said, 'Stop forgetting to Venmo me' and didn't realize that Venmo [is] only used in the United States. I got a lot of DMs asking what Venmo is. The goal is to keep it relatable and funny for everyone."

It's true! The right message is only effective when you know and understand your audience and location. This also goes for catchy out-of-home ads; the key is to relate the message to who you're speaking to and where. "Whisper to the one person reading it and scream to thousands at the same time" is a phrase Eddy Herty, national creative director at OUTFRONT Studios, says often.

Delivering an impactful and meaningful message to a person "one-to-one" and "one-to-a-million" is difficult but doable with the right creative.

I asked @DudeWithSign, if he could put anything on a billboard, what would it be? His response, "Stop asking where I get my cardboard!"

(If you must know, the cardboard he used in the first photograph, he brought with him, so I do not know where he got it from; mine was from a street vendor in Times Square.)

Max Siegelman, As the head of social media and collaboration for one of the largest out-of-home media companies in North America, OUTFRONT Media, Max is responsible for defining and managing the company-wide social strategy. He works closely with client and …