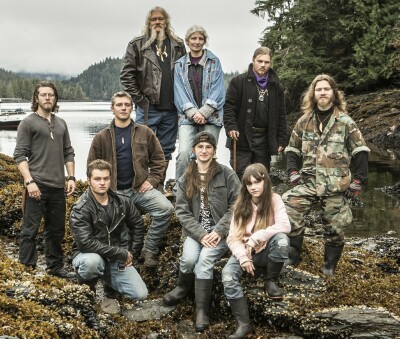 Pasadena, CA -- Discovery Networks yesterday kicked off the Winter 2014 Television Critics Association tour doing what every network ought to do at one of the two biggest TV press events of the year – it delivered a series of compelling panels that stimulated the crowd and generated interest in everything it presented. Collectively, Discovery brought news, drama, humor, emotion and conflict to TCA – all of it on the stage.

The day began with a session for the Military Channel, which will change its name to the American Heroes Channel in March, promoting "Against the Odds," an upcoming series that will tell true-life stories of military personnel from past and present wars. Three American heroes were on the panel for what turned out to be a highly emotional session: World War II veteran William Steele, Vietnam War veteran John Ligato and Iraq War veteran Perfecto Sanchez.

You could have heard a pin drop in the cavernous Huntington Ballroom at the Langham Hotel as Steele, who served in the Marines, spoke about how united the country was during World War II and how divided it is now. Steele choked up while commenting on the political division that is currently breaking America apart. It was a powerful moment.

Ligato commented on one of the most shameful aspects of modern American history: The appalling treatment of Vietnam War veterans by American civilians upon their return home. During that era, Ligato recalled, people "could not separate the war from the warrior."

Sanchez, the youngest man on stage, was no less profound. "We all fought for the same reasons, for our soldiers and fellow Marines," he said. "That's the continuity that transcends generations." Gesturing to the men next to him he added, "They paved the way for our generation so we could come home."

"When you're in a war you don't fight for honor," Steele later asserted. "You fight for defense of each other."

"The heroes of war are the ones that didn't come home," Ligato remarked, bringing another hush to the room.

A session for the Investigation Discovery newsmagazine series "Deadline Crime with Tamron Hall" followed. Hall, an anchor on MSNBC and a correspondent for NBC News, wasn't very clear when answering questions about the nature of her relationships with NBC and Discovery, but she spoke with great clarity about the event that has motivated her to investigate violent crime: The murder years ago of her older sister, which remains unsolved to this day. She was joined on stage by Alicia Kozakiewica, a young woman who at the age of 13 was kidnapped, held captive and tortured by someone she met on the Internet.

Sessions for the new Velocity series "Americarna," which will explore this country's car culture, and the new OWN observational reality series "Deion's Family Playbook," about international spots superstar Deion Sanders and the work he does to improve the lives of children who live in underprivileged areas, followed. Sanders and his girlfriend Tracy Edmonds, who will also star in the series and is executive producing it with Sanders, proved to be extraordinarily charismatic panelists, which bodes well for the still young OWN. I think OWN presidents Sheri Salata and Erik Logan surprised the room when they noted that their network now has 18 established/returning series and is readying 10 new ones.

The biggest event of Discovery's morning, and also the primary reason for its party last night, was a panel for Discovery Channel's first scripted project, a miniseries titled "Klondike." Set in the boomtown of Dawson City during the Gold Rush of the late 1800s, "Klondike" has an impressive cast that includes Sam Shepard, Tim Roth and Richard Madden, whose character Robb Stark was one of the victims of the Red Wedding massacre on "Game of Thrones."

Discovery Channel followed the session for the very well-received "Klondike," which makes its debut on January 20, with one for an upcoming observational series titled "Alaska Bush Family," about a couple and their seven children who live in the remote Alaskan Bush region. It's amazing how cable networks keep coming up with reality variations on the same themes (in this case families that have unusual lives) and somehow manage to make so many of them feel like something fresh and new. That's the case with this show.

If the Discovery morning began on an emotional level with three of the veterans featured in "Against the Odds," it ended with an emotional impact of another kind: A promotion for the 10th anniversary this year of the other must-see telecasts of Super Bowl Sunday, Animal Planet's irresistible "Puppy Bowl" and 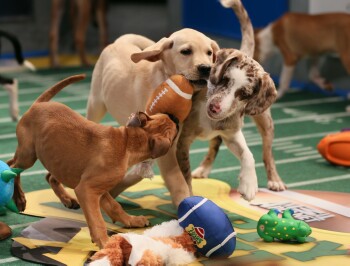 "Kitty Half-Time Show." The network brought in a half-dozen puppies and kittens from a local shelter, all of which were available for adoption, for critics to observe, hold or play with. The Winter 2014 tour was only a few hours old and already critics and reporters were missing the pets they left at home. (That's always the case; people seem to value a break from the humans they leave behind, and they can communicate with them in a number of ways, but pet separation anxiety has long been a thing at TCA gatherings.)

Among the other very noteworthy presentations yesterday was an IFC session in which President and General Manager Jennifer Caserta announced that the letters I, F and C no longer stood for Independent Film Channel but would now simply be the name of the network, which was followed by a panel for the comedy mini-series "The Spoils of Babylon," a spoof of the great trashy big-hair mini-series and primetime soaps of the Eighties. ("Babylon" premiered last night, just a few hours after the panel, which meant all of the tweeting and social media buzz that the panel generated would immediately serve as same-day promotion for the show.)

After IFC, TV One, which will telecast this year's NAACP Image Awards, did something really special, bringing in a number of celebrities (including Joe Morton, Keke Palmer and Gina Torres) to announce live at TCA the nominees in the major categories of this year's event. If only the Emmys did this during the TCA Summer tour! I mean, that would make a certain kind of sense, wouldn't it?