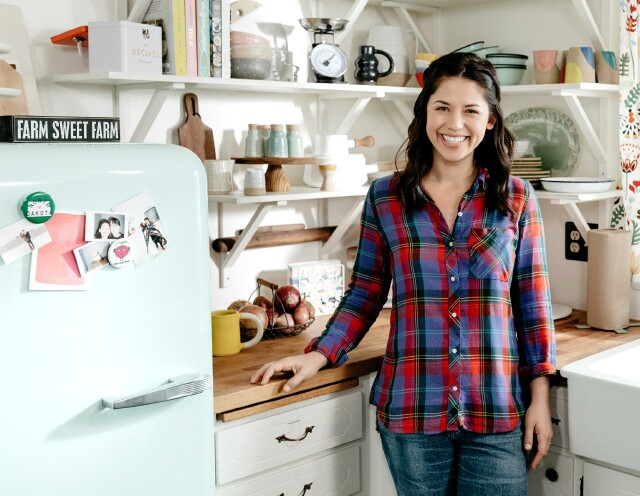 There are the slight grins we force ourselves to crack, the more genuine happy-to-see you smiles … and then there’s the Good Golly Miss Molly Beam.  The latter belongs to Molly Yeh, a rising Food Network star who has such an upbeat personality it’s impossible to remain grumpy around her.  Like anyone who makes it onto the Discovery-owned network, Yeh (appropriately pronounced “yay”) knows her way around a kitchen.  What differentiates her, though, is how she does that.  Sure, every person is an individual, but Yeh truly is in a class by herself as a Chinese Jewish percussionist who moved from Brooklyn to live on a farm in the upper Midwest.

Yeh makes challah and dumplings, and while explaining how she went from a Juilliard student to an author and TV cook, that ever-present smile radiates.  Before her show, Girl Meets Farm, returned for its fourth season on Sunday, Sept. 8, Yeh kicked back with MediaVillage, as she recounted growing up in Glenview, Ill., a Chicago suburb; training at Juilliard, and winding up in East Grand Forks, Minn.  She explained how she could play "anything you hit.”  Still, it wasn’t enough; Yeh needed to march to her own drum.

“I always wanted to be creative,” Yeh acknowledged.  “Creating a cake or folding a dumpling or baking a loaf of challah was way more creative to me than playing someone else’s music and waiting in the back of the orchestra for my part.”  So, she started a blog, my name is yeh, a decade ago.  That led to a cookbook which led to the show.

“I was in New York for the book launch, and the literary agent said, ‘some folks at Food Network would like to meet you.’  I got to go to the offices and eat hummus at Dizengoff,” she recalled of dining at the famous hummus restaurant that was in Chelsea Market, downstairs from Food Network’s offices.  “It was a great, fun time.”

But as far as a grand plan to conquer digital, books and TV?  There was none.  Yeh cooked because her mom, from Long Island and the Upper East Side,prepareddinner every night and baked bread and coffee cake every weekend.

“I guess I just made the selfish decision that I just want to do fun things for work,” she admitted.

She eventually left Brooklyn for East Grand Forks, which “is a little cheaper than New York City,” with her husband, Nick Hagen, also a Juilliard music major.  He returned to his homestead, a farm on 2,000 acres that has been in Hagen’s family since 1876.  On it, they raise sugar beets, and the wheat is turned into the flour Yeh uses for baking.

Unlike so many home chefs, Yeh doesn't prefer baking more than cooking, but like almost all home chefs, she is not a culinary school graduate.

“My hands are more comfortable baking,” she said after considering how she works on camera.   “I felt like I could talk more easily while baking, but I don’t differentiate between cooking and baking.  It’s just being in the kitchen.”

The show has evolved because, “I’m more comfortable talking and chopping,” she added.

Last season was an abbreviated six episodes, but Yeh had a good reason: Her daughter Bernadette was born at the end of March.  As Yeh chatted in Beverly Hills, it had been her first time away from Bernie, a fraught time for a new mom.

Going into her fourth season, Yeh is more comfortable in front of the camera than she was at the start.  Looking back on the previous seasons, she acknowledged that she was initially concerned “about whether I would come across as me.”  Watching her on screen, though, is no different than chatting with her:  The warmth and sheer joy just come across.

“This season has a lot of menus built around fun events,” Yeh shared, citing a Rosh H’Shana (the Jewish new year) brunch.  Her twist on it is taking the traditional apple slices dipped in honey and turning them into rolls which she tops with marzipan frosting.  She also makes a “brunchy brisket with sage and fennel.”

Another episode will feature movie night treats.  In this one Yeh whips up candy bar salad. No lettuces were killed in the name of this concoction of chopped snickers, Cool Whip andJell-O pudding.  “It’s not a salad,” she said with a laugh.  “It’s just fluffy pudding.”

Yeh admitted she needs a little more work on roasting and doesn’t cook much meat.  She’s toying around with the next book idea, following “Molly on the Range: Stories from an Unlikely Life on a Farm” (2016) and “Yogurt by Molly Yeh” (2018) and fancies opening a restaurant or café in Grand Forks.

And with that, she flashes the Good Golly Miss Molly Beam.