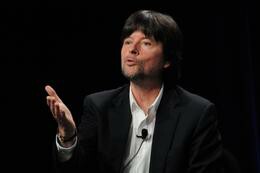 One usually associates the mini-series of documentary filmmaker Ken Burns with subjects of obvious historical importance. At first blush, Burns' latest production for PBS, the six-part, 12-hour film Ken Burns' National Parks: America's Best Idea, might not seem to carry the same dramatic weight as his earlier efforts The Civil War, Baseball, Jazz or The War, to name a few. But when Burns appeared at TCA this weekend to promote his latest project, which will debut September 27, he made clear that the origins of America's national parks are as steeped in history as any of his previous documentary subjects.

Burns isn't out to simply educate viewers about the history of our parks -- he's determined to generate a renewed sense of interest in them and ensure their future protection. In fact, he would like Americans to take a greater "pride of ownership" in these splendid lands.

Ed Martin's full live coverage from the Television Critics Association tour is available exclusively to corporate subscribers of the Jack Myers Media Business Report. For more information visit www.myersreport.com. If you believe you are a subscriber and should be receiving the extended subscriber-only version of this report, please contact Jack Myers at jm@jackmyers.com.