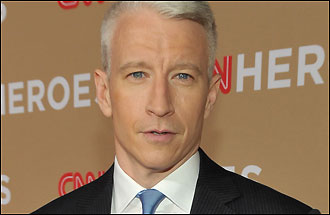 Not all fledgling daytime talk hosts appear at TCA before the launch of their new shows, and when they do they are very often met with polite half-interest, because really … what can anyone say about a new talk show that dozens of failed would-be talk show hosts haven't said before, often at a TCA tour? But Cooper had more to say than most, and TCA members were more interested than usual, because he is trying something that nobody has done before: Continuing as host of a vital live nightly news program -- CNN's Anderson Cooper 360 -- while effectively doubling his work load with the production of a daily talk show.

That's a huge challenge to handle, one that might become even more difficult when a major news story breaks in a location far from New York City (where both 360 and Anderson will originate), because Cooper has built an outstanding reputation as CNN's man on the ground wherever huge stories are developing. Cooper doesn't just pop in and out of a hot news zone: He tends to touch down and stay there for a week or more depending on how the event is playing out.

When this happens, Cooper said, his daytime show will be altered in whatever way it has to be to accommodate his CNN duties. For example, the show may originate live for a day or more from wherever Cooper finds himself. Or it may be live at the top from a certain location and then switch over to pre-taped material. This could be quite the balancing act, especially if multiple stories are breaking in different places, or if one giant story is overshadowing all else. But Cooper seems confident he can make it work. (At the start, five episodes of Anderson will be taped each week over a three-day period. That way there will always be a few available for telecast should Cooper's CNN duties take him away from Anderson for a couple of days.)

I asked Cooper what would happen if he were to land a major interview or shoot some kind of extraordinary footage during a live edition of his daytime talk show that proved bigger or more interesting than whatever might be happening later that night when his CNN show was telecast. There is so much happening during those big stories that there should be plenty of material for both, he replied. But what if he were to secure footage during the daytime show that would greatly enhance the evening show? Cooper made clear that under no circumstances would material produced for Anderson be utilized in 360, even extra footage or segments of interviews that didn't make the final cut.

Anderson, Cooper explained, will be a mixed bag of news-heavy installments and lighter fare. "It could be a huge celebrity interview one day and a provocative social issue the next," Cooper said. "We'll be talking to real people facing real situations." (Ongoing interaction with "real people," both on the show and via social media, figures prominently in Cooper's plans for the new program.) During the more entertainment-driven and pop-culture oriented installments he'll be more the Witty Cooper that is showcased to fine effect when he substitutes for Regis Philbin on Live with Regis & Kelly than the Serious Cooper who reports on hard news for CNN and also contributed segments to Oprah, his other previous foray into daytime talk.

TCA members found the Witty Cooper particularly interesting. Turns out one of the best serious news reporters on television has a weakness for the various editions of Bravo's burgeoning Real Housewives franchise -- in fact, he said he would like to have any number of those women on his show. He's also a huge fan of Daniel Tosh, the hilariously rude and vulgar host of Comedy Central's hit Tosh.0.

Interestingly, when I asked Cooper if he would have Tosh on his daytime show he seemed genuinely stumped. He said he wasn't sure. After talking with him, I'm betting he will.