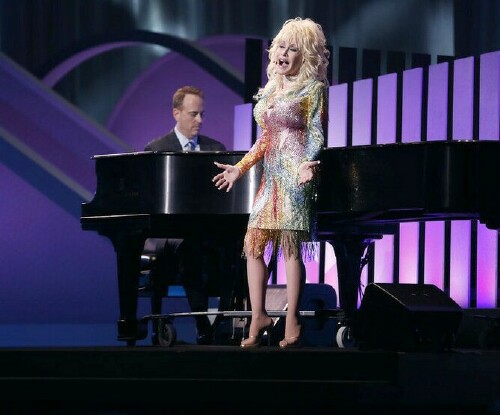 What follows is my annual critique of all the Upfront Week action. Before jumping in I would like as always to acknowledge the tremendous amount of work by the networks’ sales, marketing, promotion and publicity departments in producing all of these presentations. Even the smallest upfront event is a massive undertaking.

Each network has been assigned a Jack rating that represents an overall assessment of its presentation, including clarity of its sales strategy and program positioning, degree of engagement, star power and entertainment value.

The ratings are as follows:

From the Department of Redundancy Department: CBS once again was the broadcast network to beat during Upfront Week, thanks to its time-tested three-pronged approach to introducing and promoting its new season schedule on its day (Wednesday).

First, there was the network’s press-only breakfast, hosted by CBS Corporation President and CEO Leslie Moonves, at which journalists were the first to see all of the details of its fall and midseason schedule.

Second, CBS’ continued its enviable tradition of presenting to advertisers its upcoming schedule at Carnegie Hall -- and once again it set the gold standard for what an Upfront event should be. That said, I thought the presentation itself was a little less exciting than in recent years. (Keep in mind that I am grading CBS against itself here, rather than the other networks.) The opening bit with Network Sales President Jo Ann Ross and “The Big Bang Theory” co-star Mayim Bialik was cute, and it was exciting to see eight Super Bowl MVP legends on stage at the same time (to promote CBS’ telecast next year of the 50th Super Bowl). But there was no “wow” moment (like “Good Wife” and Broadway star Alan Cumming bringing the house down last May). Also, while CBS continued to do the best job of introducing talent in its audience – actors actually stood up, waved and turned completely around -- stars from returning shows were in mysteriously short supply. But the event overall was first class and its messaging first rate. 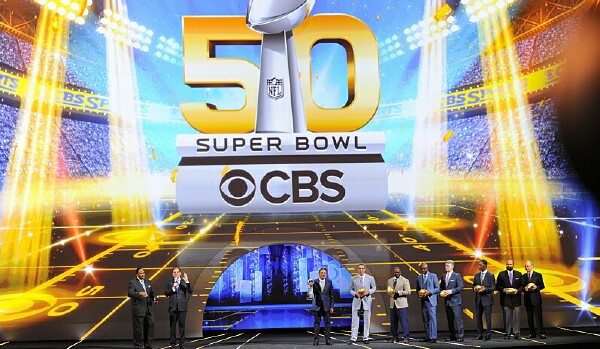 Finally, as is also tradition, CBS tossed a wonderful party in the Tent at Lincoln Center following its big show. (This I have heard from others. I was unable to attend.) It continues to amaze me that CBS and Fox are the only broadcasters that provide an opportunity for advertisers and the press to meet and mingle for a couple of hours at this all-important time of year. (What don’t Disney and Comcast understand about this?)

Like CBS, Fox continues to fully embrace the idea that an Upfront presentation is a once-a-year, all-purpose promotional event that, when handled properly, is a win for networks, talent, advertisers and the press alike. Let me say right at the top that I would have awarded Fox a coveted 5 Jacks had its presentation not once again been in The Beacon Theater, where problems continue to abound. Among them: It’s impossible to see and hear clearly in the top balcony where press and studio executives are confined. It takes forever to leave the building once the presentation ends. The venue is so dated it detracts from Fox’s very fresh and contemporary messaging. And so on. 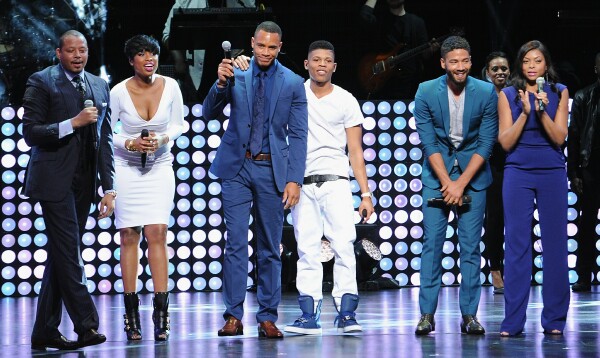 Fox always excels at extending the excitement of its Upfront event activity beyond the confines of the venue itself, and this year was no exception. Dozens of cheerful female and male cheerleaders filled the sidewalk in front of the Beacon to promote the network’s upcoming Ryan Murphy horror-comedy mashup “Scream Queens.” Each one of them had sweet treats to offer passers-by and giant knives sticking out of their bloodied backs. Inside, Jennifer Hudson and the cast of “Empire” (pictured above) rocked the house with the best musical performance of the week; Rob Lowe (star of the upcoming comedy “The Grinder”) appeared in one of the funniest videos of the week (one that entertainingly deconstructed Online Viewability Standards); upcoming Emmy host Andy Samberg charmed with his usual affable humor, and there were plenty of celebrity appearances. All in all a spectacular show that quickly and clearly put out all the right messages. And it wrapped with the usual extravaganza at Wollman Rink in Central Park, once again the party highlight of the week.

ABC gets my vote this year for Most Improved Upfront Presentation. What a shame the network still refuses to host a party afterwards. (Had it done so, it also would have received 5 Jacks.) Once again this was the only broadcast presentation that I chose to watch at home via live stream, so crisp and clear it allowed all of the excitement on stage at Avery Fisher Hall to come through. The opening video, in which characters from a variety of ABC series (plus newsman David Muir) were seated in Annalise Keating’s classroom from “How to Get Away with Murder” and learned “How to Get a Win with ABC” from the formidable Ms. Keating herself, was priceless and did more to define an entertainment network as an overall environment than anything else I saw last week. Dancers from “Dancing with the Stars” brought life to the stage. Having Viola Davis introduce Disney Media Networks Co-chair and Disney/ABC Television Group President Ben Sherwood was a similarly smart move. Having the kids from “black-ish” appear in videos explaining the intricacies of sales research (with some help from ABC Sales President Geri Wang on stage) was even smarter. Also, ABC didn’t hold back on the talent, as it has in recent years. 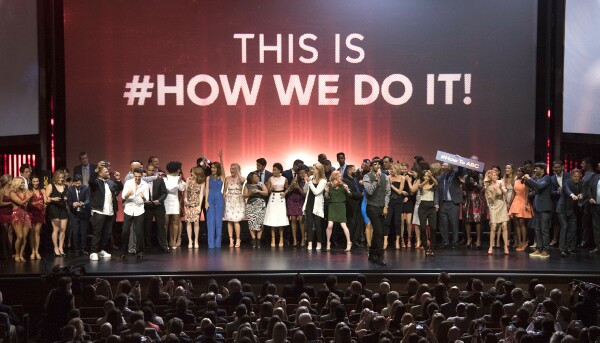 I think the only disappointment in ABC’s presentation was the annual appearance by Jimmy Kimmel. I’m a fan, but in this capacity he’s played out. Maybe next year Miss Piggy can take his place.

Once again The CW offered the briefest presentation of the week, and it once again was a can’t-miss, high energy show. It was a real treat to see the cast of “Jane the Virgin” take the stage and thank everyone in the room for supporting the first season of their show. Stephen Amell of “Arrow” and Grant Gustin of “The Flash” (pictured below) made quite an impression talking about their shows and introducing the midseason entry “DC’s Legends of Tomorrow,” which is in effect a spin-off of both series. The network’s only new fall show, “Crazy Ex-Girlfriend,” came across very well thanks to skillful editing of clips from its pilot episode. CW President Mark Pedowitz was, as always, an engaging host. The still images and videos on flashing multiple screens at the front never stopped coming and kept the room visually engaged. 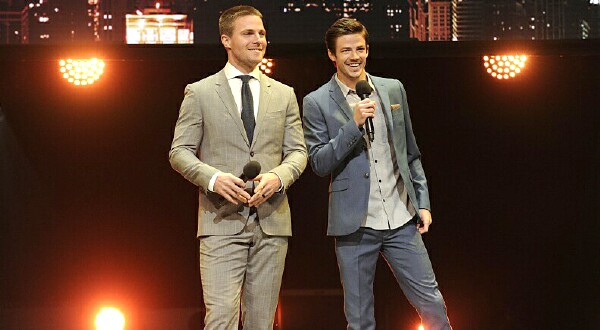 The CW continued its unique tradition of having lesser known musical performers play on stage while the audience files in and looks for seats followed by a breakout act opening the actual show. This year, however, something interesting happened. The pre-show act – innovative R&B group Naturally 7 – instantly commanded the theater at the New York City Center and brought the energy level up where Neon Trees left it off last year. But the official opening act – indie folk-pop band Of Monsters and Men – sucked all that energy right out of the room. They seemed unhappy. Maybe they made poor song choices. Maybe they realized they couldn’t top Naturally 7. (If so, they were right.)

Happily, NBC’s Upfront presentation was back at Radio City Music Hall after a sorry sidetrack last year over to the inconvenient and uncomfortable Javits Center. There was nothing particularly wrong about this event, but it wasn’t all that memorable, either. The unarguable highlight was a mini-concert by the legendary Dolly Parton, who was on hand to promote a series of made-for-television movies based on her songs that will begin on NBC next season. During the second song, “I Will Always Love You,” Parton was accompanied on the piano by NBC Entertainment Chairman Bob Greenblatt (pictured at top). It was a great moment – one that folks in attendance will refer back to for years to come.

As for the rest of the show, something was missing. “America’s Got Talent” host Nick Cannon didn’t make much of an impression as a pre-show DJ. (Live music would have helped. Where were The Roots? Or the 8G Band?) Jimmy Fallon appeared briefly on stage and for the first time ever failed to ignite an audience. Nobody from “Saturday Night Live” was called upon to do anything. Casts from new and returning NBC shows were clustered in the audience but didn’t even stand up and wave when acknowledged. (See CBS above.) 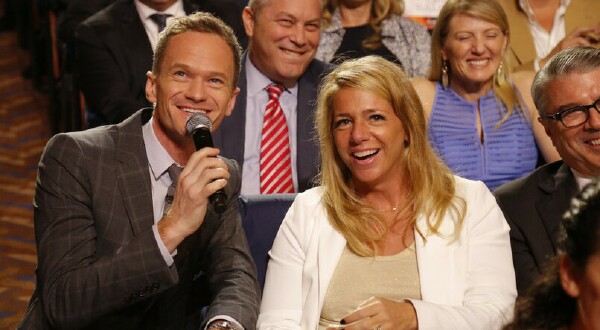 At the very least, couldn’t there have been a musical performance by Neil Patrick Harris, star of his own live weekly variety show on NBC this fall? You know, a song with amusing lyrics about NBC shows that also took shots at CBS, ABC and Fox? (The kind of thing, again, at which CBS excels.) He was featured in a very funny video involving a prank on MediaVest head buyer Melissa Shapiro (pictured with Harris, above) in which several NBC executives (including NBCUniversal Chairman, Advertising Sales and Client Partnerships Linda Yaccarino and NBC Broadcasting Chairman Ted Harbert also appeared), but that wasn’t enough.

Talk about a missed opportunity. Had NBC’s big show opened with NPH this might have been a very different review.