By Ed Martin May 30, 2017 Upfronts/NewFronts Archives 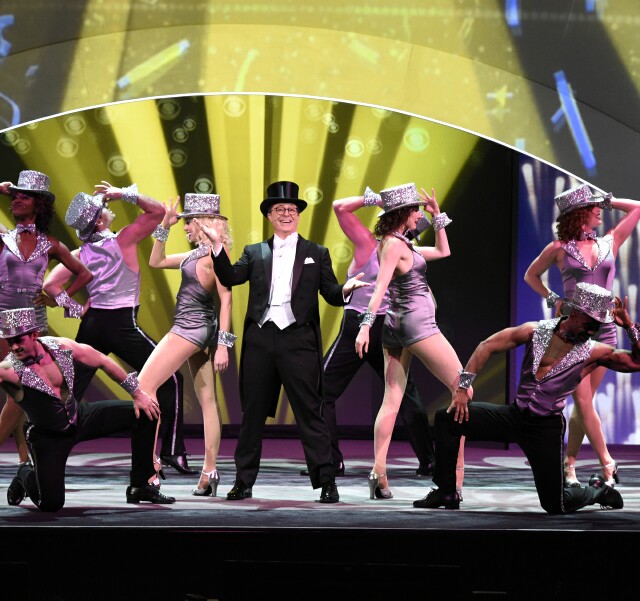 The broadcast networks’ presentations during Upfront Week 2017 will be remembered for three things – their unprecedented emphasis on data and research, their constant warnings about the hazards of digital advertising placement (while also emphasizing the increasing role digital plays in their own businesses) and, for most of them, a significant increase in the amount of time devoted to sports programming.

And so it is that we come to the annual bestowing of our coveted Jacks ratings to the five broadcast networks, which despite competing for attention during Upfront Week with ESPN, Univision, Turner Networks and others, can still arguably call the week their own.

Every year some of the broadcasters do a better job than others in delivering their messages and promoting their programming (and, now, their digital and data initiatives).  But credit must be given to everyone involved in all of their events for putting them together.  It is a Herculean amount of work, executed under great pressure and with a lot at stake, from the senior executive ranks to the publicity assistants, event planners and talent coordinators who make it all happen.  There may be questions as to why the events of Upfront Week are still necessary, given the roles social media and digital communication play in spreading each networks’ news and, in some cases, video clips a day or more in advance of each event.  But there can be no denying the professionalism on display throughout all of them.

Watch for reviews by Simon Applebaum and J.P. Fields of presentations by ESPN, Univision and Turner Networks and more here on MediaVillage.com.

CBS’ annual presentation at Carnegie Hall remains the gold standard of Upfront events, showcasing and promoting the network’s (and CBS Corp.’s) programming, sales strategies and scheduling in the grand style of Upfronts past while always feeling as fresh and contemporary as they are informative and entertaining.  It’s pretty basic despite the grandeur of it all: What better way for a company to get its points across than to keep the audience fully engaged while doing so?  The presentation began with a high-energy beat by Jon Batiste and Stay Human from Late Show with Stephen Colbert, followed by quick and concise comments from CBS Sales President Jo Ann Ross, a video starring CBS Corp. Chairman and CEO Leslie Moonves (pictured below) and Colbert that transitioned into a full blown production number on the Carnegie stage (pictured at top), a subsequent comedy routine by Colbert and then refreshingly fast-paced introductions of new series featuring clips and on-stage cast members.  These included a sneak preview of the upcoming CBS All Access series Star Trek: Discovery and an appearance by James Corden dressed as a Vulcan. 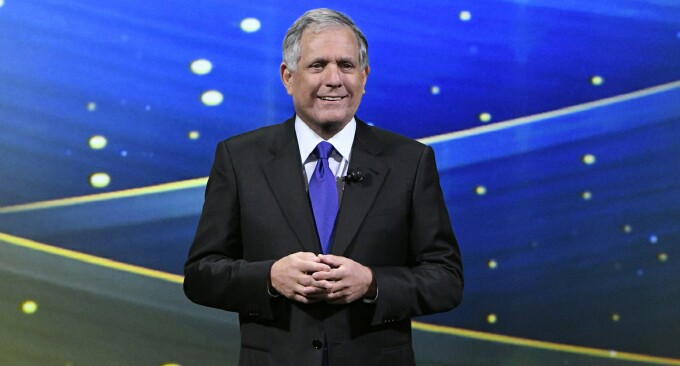 There was also time for a comedy routine by Jermaine Fowler that was so funny it had attendees hoping that his sitcom Superior Donuts remains on the CBS schedule for years to come.  Because CBS Entertainment President Glenn Geller is on medical leave, Moonves was on stage more than he has been in recent years, and that’s always a plus.  CBS Primetime Senior Executive Vice President Kelly Kahl also stepped up and did a fine job in his Carnegie Hall debut.  Also contributing to CBS’ 5 Jack rating – its 21st annual breakfast for the press that morning, hosted by Moonves and Kahl, with top CBS programming, sales, marketing, research and diversity executives in attendance and freely mingling with reporters, and featuring the first reveal of the network’s 2017-18 primetime schedule.  And, of course, its post-presentation party at the Plaza Hotel, this year impressively encompassing three floors, allowing for easy access to talent, executives, food and drink for all.  In an amazing touch, Batiste and his band led a procession from Carnegie Hall to the Plaza.

NBCU made a huge improvement over its presentation last year, revealing details of new shows from all of its broadcast, cable and Spanish-language platforms by network rather than genre, and focusing at the beginning and end of the presentation on the best that the NBC mothership has to offer, including an opening performance by new Voice judge Jennifer Hudson that blew the roof off Radio City Music Hall.  NBCUniversal Chairman, Advertising Sales and Client Partnerships Linda Yaccarino (pictured below) then addressed the audience, maintaining her status as the most eloquent executive of any Upfront stage by setting up not only the presentation to come but, in many respects, the entire week of events that would follow.  A funny video promoting the return of Will & Grace followed, and it thrillingly transitioned into a musical performance of “As If We Never Said Goodbye” by its four stars on the Music Hall stage backed by a full orchestra. 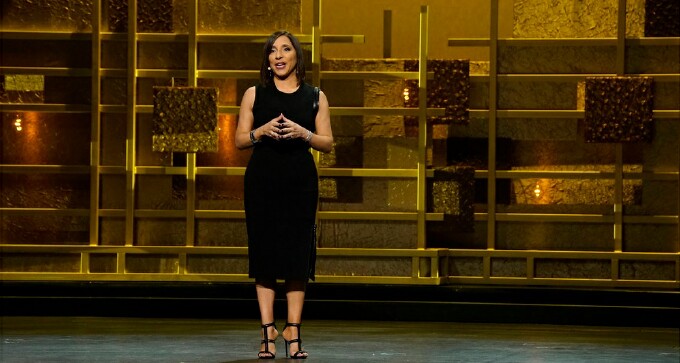 After an hour of mini-presentations for almost every cable and digital network in the NBCU family and an official welcome to Megyn Kelly by some of the stars of NBC News, the event reached its emotional highlight:  Video testimonials by fans of This Is Us and an appearance on stage by its much-loved cast.  (People around me were misting throughout, which speaks volumes about the emotional connectivity of this show.  The cast is pictured below.)  The always reliable Late Night host Seth Meyers once again delivered the funny.  (“The Upfronts have been post-truth from the beginning!” “This week is the definition of fake news!”)  Then out came NBC Broadcasting and Sports Chairman Mark Lazarus to talk about the company’s plans for coverage of its historic trifecta: the 2018 Winter Olympics, Super Bowl LII and the Fifa World Cup. (Read much more about the latter in J.P. Fields’ interview with Telemundo Deportes President Ray Warren.)  Curiously absent from it all: NBC Entertainment Chairman Bob Greenblatt.  I’ve attended almost every broadcast Upfront presentation for the last 25 years and I don’t remember one in which an entertainment executive never appeared on stage. 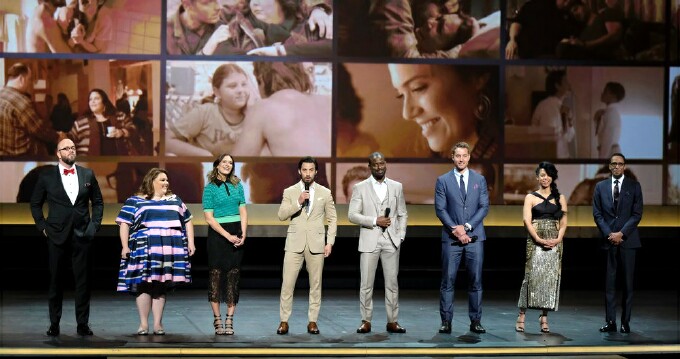 ABC went comfortably old school with a presentation that informed and entertained without ever taking focus away from the real reason most of the audience had come to David Geffen Hall at Lincoln Center – to see and learn about the network’s new programming.  The messaging began the moment guests entered the building when they were handed cookies featuring the faces of characters from the long-running hit sitcom The Goldbergs.  An opening number by Lea Michele, who will star in the new comedy The Mayor, started it all off on a high note.  That was followed by a video featuring Anthony Andersen as Andre Johnson, the advertising executive he plays on black-ish, brainstorming with his team and various characters from other ABC series to come up with a theme for this Upfront season.  (The winning slogan, “Defining Moments,” recurred throughout.) 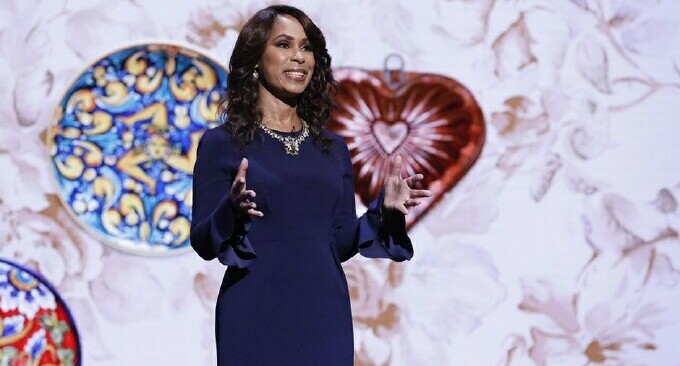 Andersen then introduced Disney Media Networks Co-Chair and Disney/ABC Television Group President Ben Sherwood (referring to him as “the whitest person in America”), who welcomed the audience and read a letter from annual ABC Upfront funnyman Jimmy Kimmel, absent due to family matters.  After assuring everyone that his newborn son Billy was doing well, Kimmel promised to return in 2018 “on the off chance broadcast television continues to exist.”  A video in which new Disney/ABC Ad Sales President Rita Ferro played The 100,000 Pyramid with Dancing with the Stars host Tom Bergeron was similarly entertaining.  In her second round of Upfront action, ABC Entertainment President Channing Dungey (pictured above) did a fine job of introducing the network’s many new series for fall and midseason, including a Roseanne reboot (pictured below) and yet another Marvel series, Marvel’s Inhumans, the first two hours of which will debut on IMAX screens in September.  The event also included a fine farewell to Scandal as its approaches its final season and a rollicking performance by the Backstreet Boys to kick off the network’s new summer reality talent show Boy Band.  Curiously absent from it all: Ryan Seacrest, a man synonymous with American Idol (coming to ABC next March), new co-host of Disney’s syndicated Live with Kelly and Ryan and host of the network’s annual Dick Clark’s New Year’s Rockin’ Eve.  Did he have something better to do? 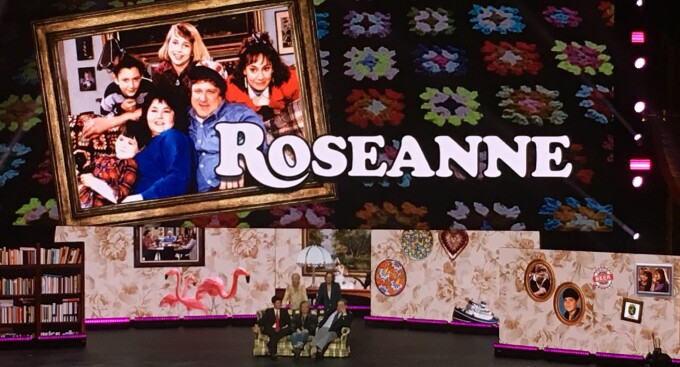 Hard to believe that an Upfront presentation that included amazing musical performances by cast members from Empire and Star (pictured below) and multi-talented Family Guy creator Seth MacFarlane – plus a group of talented young people singing “Seasons of Love” from Rent to promote Fox’s upcoming live telecast of that modern classic – is receiving a mid-range score on the Jacks scale. (Keep in mind, a rating of 3.5 Jacks falls somewhere between “good” and “very good,” so it’s not a terrible thing.)  But even with the wonderful moments above it wasn’t easy to sit through, especially the first half-hour, a relentless download of data, science and sports.  Not even a surprise appearance by former Major League Baseball superstar (now a Fox Sports analyst) Alex Rodriguez could help. (Actually, it helped a little, but not as much as the unexpected delivery of eagerly devoured cookies under the direction of Gordon Ramsay to everyone in the Beacon Theater later in the show.) 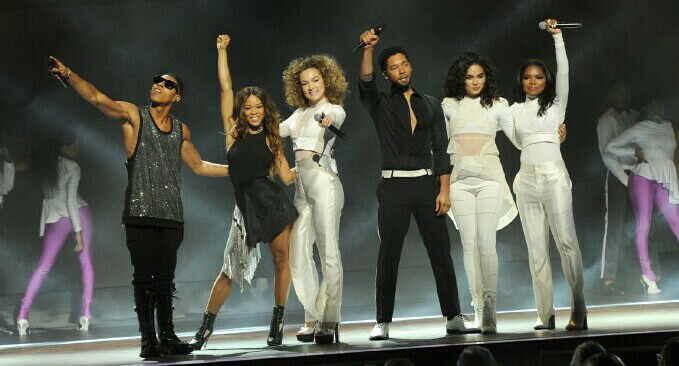 Fox Television Group Chairmen and CEOs Dana Walden and Gary Newman (pictured below)  came out last to present details of the network’s new shows and fall schedule, but their time on stage with what most people in the theater surely felt was the real meat of the meal felt rushed.  This was probably a 3 Jacks show, but Fox gets the extra half-Jack for once again hosting an amazing after-party in Central Park’s Wollman Rink, filled with dozens of stars and executives – the latter only too happy to hang out and talk to everyone, including members of the press.  I left the party around 9 and (young) people were still pouring in.  One of my colleagues left about an hour later and guests were still arriving!  For all we know the Fox bash went until midnight or later. 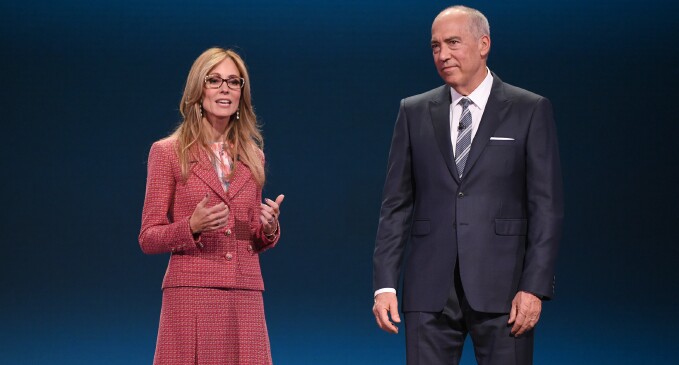 There was nothing wrong with The CW’s presentation on Thursday, but I have to admit that at this point I would like something a little different in its annual Upfront event that might better reflect its phenomenal growth in recent years.  Maybe the opening performance by Muse didn’t reach the bar set by previous artists at CW events.  (A number at mid-show by the mad-talented cast of Crazy Ex-Girlfriend seemed to do more to energize the audience.)  Maybe clips from its new shows weren’t as exciting as those in recent years. (Think about the lively reactions to The Flash, Riverdale, Crazy-Ex, etc.).  Or maybe we were all just beat from the heat (and three non-stop days of Upfront activity). 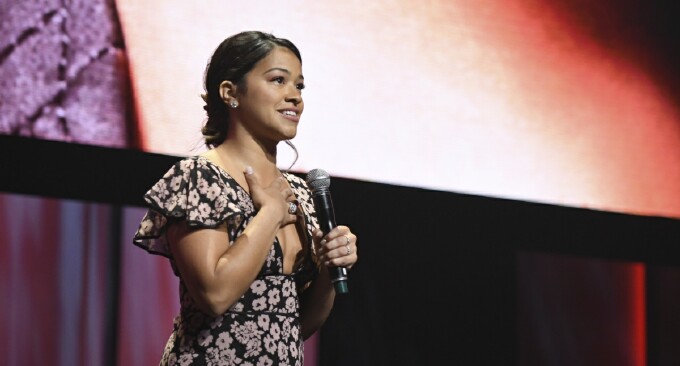 Jane the Virgin star Gina Rodriguez (pictured above) was delightful as always, talking about diversity, inclusion and healing the world “one character at a time.”  It was great to see Supernatural stars Jensen Ackles and Jared Padalecki again – a remarkable 12 years after the debut of their unstoppable show.  CW President Mark Pedowitz (pictured below) and Executive Vice President of National Sales Rob Tuck did a fine job reinforcing their network’s messages. The top takeaways: The CW is a true multi-platform success, was and remains a digital pioneer and was the first to connect advertisers’ brands with premium digital content. 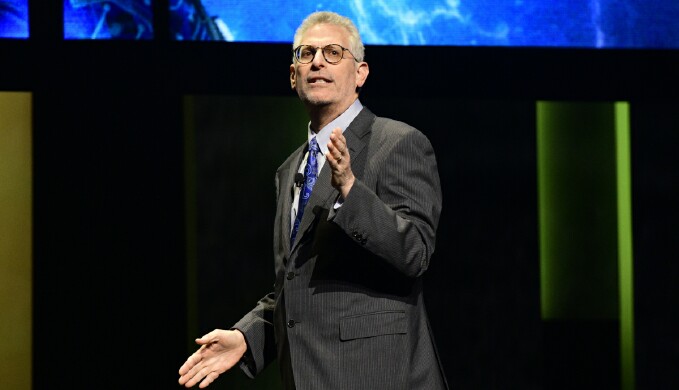