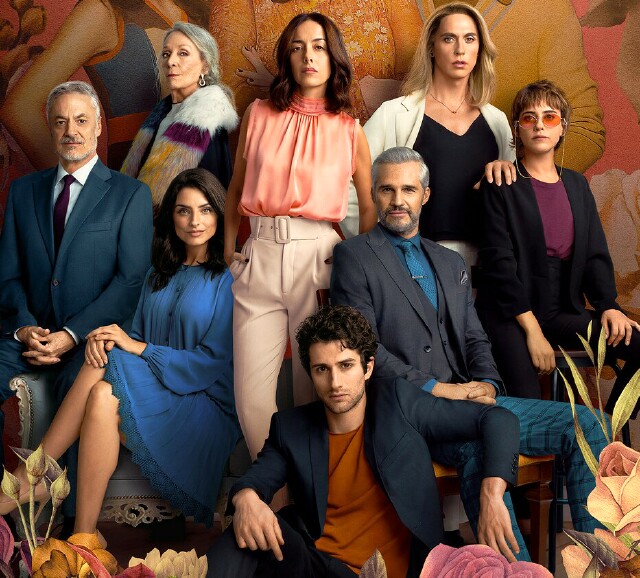 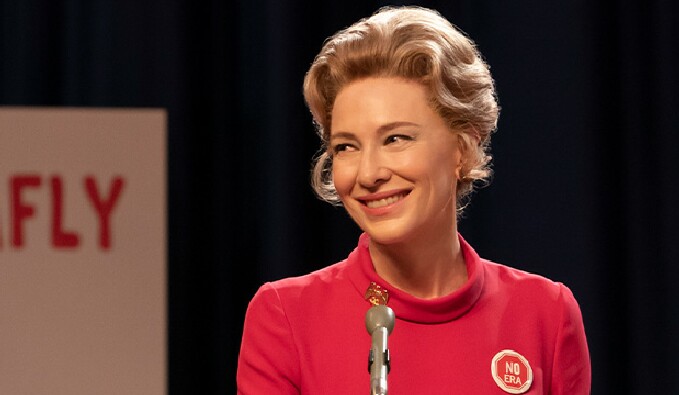 Mrs. America (FX on Hulu, pictured above) Hands down the best American television program of the year to date (and I haven’t heard of anything coming up that looks to take away that honor).  It is also the best showcase for adult actresses since HBO’s Big Little Lies.  (As far as I’m concerned it is even better.)  The performances are dazzling and delightful, but it isn’t really right to describe this limited series as “fun” since the troubling ‘70s-era history lesson that informs the narrative remains so relevant to this day.  I was at a press conference for this show back in January and I was stunned by how many of the younger reporters around me knew nothing about Phyllis Schlafly, Bella Abzug, Shirley Chisolm, Betty Friedan or Gloria Steinem, nor the history of the movement behind the ERA.  It wasn’t that long ago when these women dominated the social and political landscape.  I expect the women who play them here -- Cate Blanchette, Margo Martindale, Uzo Aduba, Tracey Ullman and Rose Byrne, respectively -- to dominate the Emmy landscape later this year.

Elite(Netflix, pictured above) I hadn’t watched this teen drama from Spain about a multicultural mix of students at a fancy-pants prep school during any of its three seasons, so once I discovered it, I got to indulge in a mega-binge.  That was in March.  Nothing I’ve watched since has so thoroughly pulled me in and refused to let go.  What strikes me the most about it is the emotional fearlessness of the cast and the writers to “go there” when exploring the lives of its characters, rather than skip around the edges of adult content as if the show’s target audience hadn’t grown up with the internet.  Not since the British drama Skins has a television series so convincingly posited that the kids are not alright, regardless of gender, gender preference, race or economic status.  Skins, though, was grounded in day-today realism (during its first two seasons, anyway).  Elite goes the route of American youth ensemble dramas, placing its protagonists in extreme conflicts that stretch beyond the norm.  That doesn’t matter.  Elite is not the kind of show that wins awards, but it is more entertaining and authentic than many of those that do. 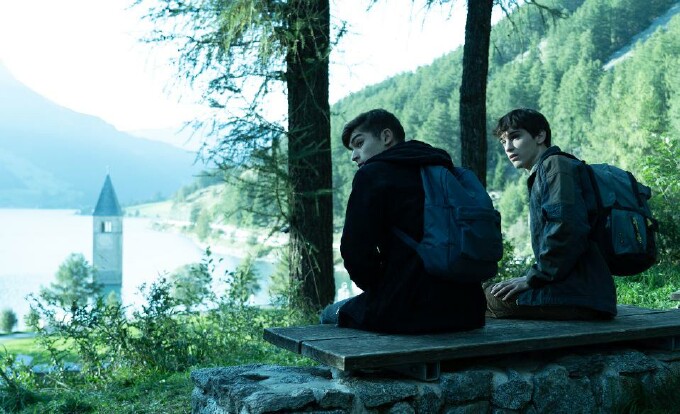 Curon (Netflix, pictured above) I’m only halfway through season one of Netflix’s latest supernatural thriller and it has already given me more creeps per hour than the highly acclaimed The House on Haunted Hill two years ago.  The title location is a remote Northern Italian village with a history shrouded in mystery, a lake with a haunted clock tower poking out of it, a frequently failing power grid and a robust population of those same know-it-all teenagers who turn up in almost every horror movie.  Oh, and there are ghouls or ghosts or spooky somethings creeping about in the dark of night.  Credit the atmosphere and location shooting for maintaining the eeriness of it all, even when characters keep doing things that nobody in real-life would even consider (like investigating eerie noises in locked rooms in the middle of the night when the power has gone out, rather than hiding under the covers and waiting for the morning like rational individuals).  The storytelling is a little choppy in parts, and certain events are a little too predictable, but Curon is a hot summer watch.  Even when the narrative quiets down, shots of the clock tower looming in the lake bring the chills ... and not just because the water is cold.  The tower is real, by the way.  (The body of water is known as Lake Resia.)  The bells were long ago removed, but locals still hear them ring ... 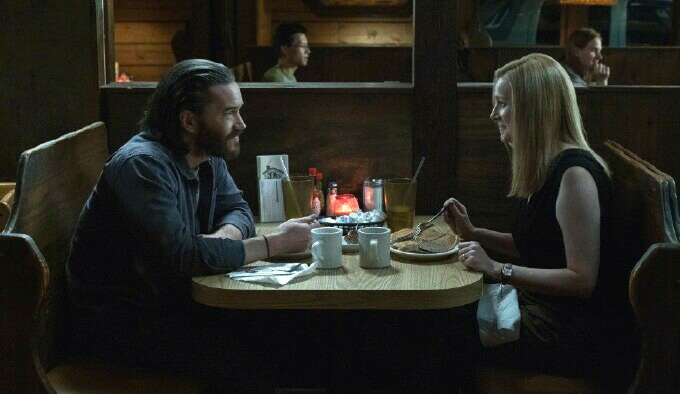 Ozark (Netflix, pictured above) Any critic who isn’t currently talking about the utterly devastating performances by Laura Linney and Tom Pelphrey in season three of Netflix’s increasingly dark drama Ozark simply isn’t doing his or her job.  Linney has always been outstanding here, but the depths of her portrayal this season as loving and lethal wife, mother and businessperson Wendy Byrde – a woman torn asunder by her own drive -- is largely unparalleled.  Pelphrey, as her bipolar brother Ben, is right there with her.  Their scenes together, especially toward the end of the season, have the same pulse-pounding power that James Gandolfini and Edie Falco brought to their more combustible scenes on The Sopranos.  Series star Jason Bateman won the Emmy last year (as Best Director!) and co-star Julia Garner (still fantastic) won Best Supporting Actress in a Drama Series.  It is not that far off the mark to imagine Linney and Pelphrey adding to Ozark’s Emmy total. 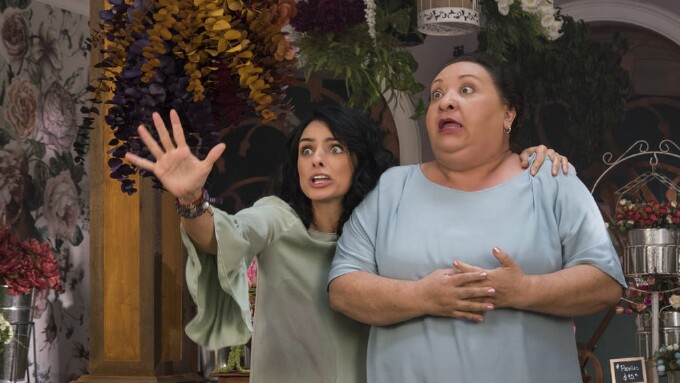 La Casa de Las Flores (Netflix, pictured at top and above) This darkly delicious comedy-drama from Mexico is a perfect summertime treat and a witty distraction from the challenges of the day.  It’s sexy AF, too.  The trials and tribulations of the dysfunctional de la Mora family, proud owners of a once-thriving florist and a scandalous cabaret that share the same name, make for a tasty telenovela.  Or is it a sexually super-charged spoof of the genre?  Who cares?  Every person on screen is clearly having as much fun as the viewer, which makes their characters increasingly welcome with each passing episode.  Cecilia Suarez as Paulina, the daughter at the center of the de la Mora cyclone, has a way of delivering her dialogue that is unlike any performer I have ever heard on television, in movies or on the stage.  Once you hear it, you won’t be able to shake it, either.  The striking opening credits are a whole show in themselves, too.  Do yourself a favor and ignore Netflix’s “Skip Credits” button on this one. 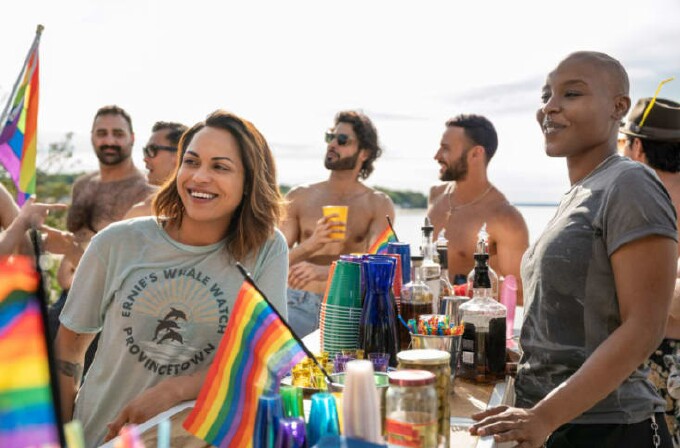 Hightown (Starz, pictured above) Already renewed for a second season, Hightown is an intense, intermittently nasty murder mystery, laced with graphic, grisly violence; adults-only sex scenes, and occasional glimpses into the anything-goes atmosphere of the summer season in Provincetown, Mass.  (In fact, the action spans all of Cape Cod and occasionally moves off-Cape, too.)  Let’s call it the television equivalent of a summer beach read – a tattered paperback with grains of sand spilling out from its suntan-lotion-stained pages.  I have probably made it sound better than it is, but I’ve been inextricably hooked from episode one despite the dozens of shows competing for my time.  Monica Raymund and James Badge Dale play decidedly different detectives I will welcome back to my TV in future summers.