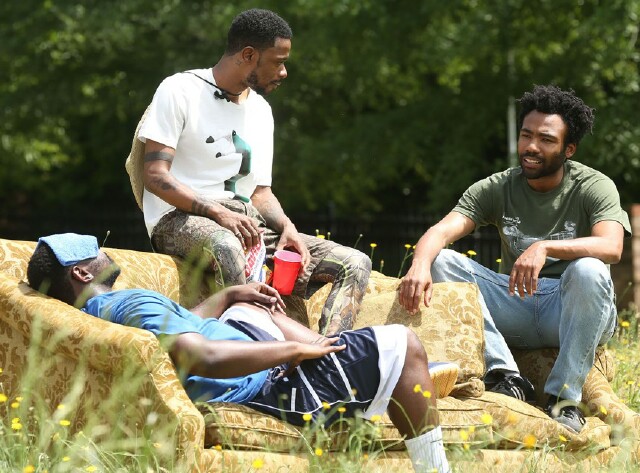 As with the Drama Series category, there is no shortage of deserving programs and performers in the Comedy Series arena.  And so it is that egregious oversights abound here, as well, with many of TV's funniest series and most talented stars inexplicably failing to receive nominations.  I'll get to it below, but the one that really kicks me is the exclusion of CBS' The Big Bang Theory from the nominees for Outstanding Comedy Series and its delightful lead and supporting players being shut out of their categories, as well (smh, Emmys).  There is a simple reason why this show is the highest-rated first-run sitcom and that reruns from its earlier seasons continue to soar in syndication:  It is the most consistently funny scripted series on television.  What's more, and for what it's worth, its delightful prequel, CBS' Young Sheldon, looks to be the funniest new sitcom of the 2017-18 season.  So with that gripe (and others) hanging in the air, here is the second installment in my three-part series looking at the Drama Series, Comedy Series andLimited Series and Movies categories.  Who was left out?  Who will win?  Who should win?  Who knows?  And in many categories below, what the heck were they thinking?

Egregious oversights:  As noted above, there is just no excuse for The Big Bang Theory to be ignored in this category.  Perhaps it's indsutry-wide envy?  That may also explain the fact that the second funniest comedy on TV, CBS' Mom, which like Big Bang is from executive producer Chuck Lorre, was also overlooked.  One might suggest that because Big Bang has been on for so long (it is about to start its 11th season) it doesn't need ongoing recognition, but that's like saying Julia Louis-Dreyfus should no longer be honored for HBO's Veep.  (Does she need another Emmy for her work on that show?  Of course not.  Does she deserve one?  Of course.)  And then there is the case of ABC's Emmy darling Modern Family, which has been running on fumes for the last couple seasons but continues to be nominated.  Big Bang, on the other hand, is still speeding along on a full tank of gas.

Preference:  Atlanta(pictured at top).  Among the actual nominees in this category Donald Glover's take on life as it is lived by millions of people whom television writers generally care not to acknowledge was the freshest and funniest new series of any kind during the nomination period (June 1, 2016-May 31, 2017).  Many episodes were laced with an extreme comic genius rare in any medium.  Would voting members of the Academy of Television Arts & Sciences dare to suggest otherwise?

Prediction:  Atlanta, for the reasons mentioned above.  But don't count out a potential three-peat by front-runner Veep.

Egregious oversight:  Hank Azaria, IFC's Brockmire.  His exclusion is criminal.  Azaria gave one of the great performances of the nomination period, period.  Had he been nominated I would have wanted him to win.

Preference:  Donald Glover, Atlanta.  The multi-talented Glover's wholly natural performance as struggling, flat-broke rap promoter Earn Marks was as on-point as all of his other work on this show.

Prediction:  Jeffrey Tambor, Transparent.  Just a feeling.  Tambor was as grand last season as he has ever been in the all-important and instantly iconic role of transgender woman Maura Pfefferman.

Egregious oversights:  Anna Faris, Mom, and Aya Cash, FXX's You're the Worst.  Faris is every bit as funny, fearless, spirited, charming and moving as her much-honored co-star Allison Janney, but she has never been nominated.  That's a shame, as is the Academy's continued failure to nominate Cash for her often breathtaking work as a sexy cynic who struggles with debilitating bouts of depression.  She's the best.

Preference:  Allison Janney, Mom.  She started at the top and gets better every year.

Prediction:  Julia Louis-Dreyfus, Veep.  At this rate she will surpass Cloris Leachman as the actor with the most Emmys to her credit.  We should now include her on the list of television's all-time funniest actresses, along with Lucille Ball, Mary Tyler Moore, Jean Stapleton, Carol Burnett and Candice Bergen.

Egregious oversights:  Desmin Borges, simply remarkable as a veteran struggling with PTSD in You're the Worst, and the unfailingly funny Brian Tyree Henry as rapper Alfred "Paper Boi" Miles in Atlanta.  But FX/FXX has this category in the bag anyway, because of the following:

Prediction:  Louie Anderson in Baskets.  How can he not win?

Egregious oversights:  Mayim Bialik and Melissa Rauch of The Big Bang Theory for continuing to shine in one of television's brightest comedy ensembles.

Preference:  The magnificent Judith Light of Transparent.  Even when I get tired of this often tiring show I never lose interest in her mercurial portrayal of Shelly Pfefferman.

Egregious oversight:  NBC's Late Night with Seth Meyers.  Once Donald Trump became President of the United States the affable Seth Meyers became the scrappiest host in late night.  His show should not have been excluded from the this list of nominees.

Egregious oversight:  Nothing.  These are the six best shows in this category.

Next:  Limited Series and TV Movies