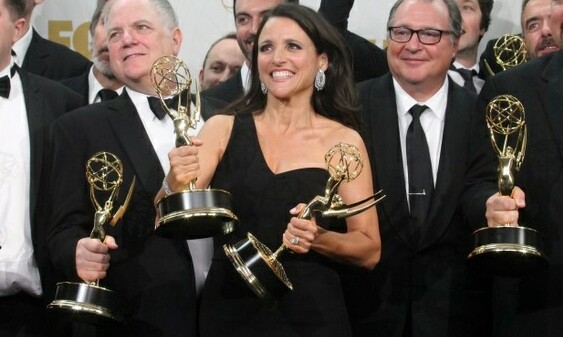 Well, nine out of fifteen ain’t bad. That’s how I scored Sunday night with my predictions in the top five categories of the three big Emmy genres (Comedy Series, Drama Series and Limited Series/TV Movies). The thing that threw me off pretty much undercut everyone else’s predictions as well: The Mighty HBO Tsunami – a wave of awards that was unexpected in its size and scope and dwarfed everything in its path, even if the honors themselves weren’t wholly unwarranted.

But before I get into that: Wasn’t it interesting (and refreshing) not to hear any real complaints yesterday on Twitter or elsewhere about Andy Samberg’s work as host of this year’s awards? Typically, unless it’s Neil Patrick Harris hosting the Tonys or Hugh Jackman hosting the Oscars or Tina Fey and Amy Poehler hosting the Golden Globes, the day after usually brings with it unending (and often deserved) criticism of any big award show’s host. But Samberg seems to have impressed all around, perhaps because he maintained his signature gentle-goof charm throughout and made it work for him every time he was on stage.

Last month at a Fox event during the TCA tour I was in an elevator full of television critics that Samberg, who had been waiting in line with us, was reluctant to enter. After we gently but firmly coaxed him into joining us for the long lift to the Soho House, he launched into an impromptu riff on a particular high-profile series that was underperforming at the time. It was one of the most entertaining elevator rides ever; Samberg’s instant improvisation was smart and funny, and the whole thing at his request was off the record. So the fact that he did as well as he did at as Emmy host didn’t surprise me at all.

As for the show itself, I can't help but wonder: If television is bigger and better and broader than ever, as everyone insists on declaring, why weren't the ratings stronger for this Emmy presentation? Could it have anything to do with the dominance of HBO, which may be a household name but is not a household network in the manner of the broadcasters, the basic cablers and the streaming services? Or is it simply the power of NFL Football, a fearsome time period competitor for anything?

Regardless, HBO was triumphant in all three scripted genres (and it also did well one week earlier at the Creative Arts Emmys, where its movie “Bessie,” its documentary “Going Clear” and its documentary series “The Jinx: The Life and Deaths of Robert Durst” were honored). An almost complete “Veep” sweep was compromised only by Allison Janney winning her second Emmy for Outstanding Supporting Actress in a Comedy Series for “Mom.” I’m not sure why Emmy voters thought better of this show than of HBO’s much funnier “Silicon Valley” or ABC’s five-time winner “Modern Family,” which had a better season in year six than in its previous three, or Amazon’s historic “Transparent.” But it was no surprise at all to see Julia Louis-Dreyfus (pictured at top) take home her sixth Emmy and Tony Hale his second.

Similarly, I would never single out “Game of Thrones” as the genre’s best (especially for its fifth season, not its finest). I really thought a farewell nod to AMC’s four-time winner “Mad Men” was in order. I predicted a second Emmy for “Thrones’” supporting dynamo Peter Dinklage … but I never thought the show would rack up 12 wins, which landed it in the history books as the most honored series for one season in the history of the Emmys.

Thank goodness Jon Hamm was lovingly honored at long last for his iconic role in AMC’s “Mad Men.” With HBO on such a roll I thought for a moment that voters might for a second time give the award for Outstanding Lead Actor in a Drama Series to Jeff Daniels, star of “The Newsroom.” (When I told him later Sunday evening at the AMC Networks party that I had been present the many times that he and “Mad Men” had been recognized over the years by the Television Critics Association with its coveted TCA Awards, a beaming Hamm – who could not contain his Emmy happiness – praised the TCA for being “early adopters.”)

It’s interesting that Netflix, which seems to be foremost in everyone’s minds these days and which went into the awards with an impressive number of major nominations, received only one major prize on Sunday – a not unexpected second win for Uzo Aduba of “Orange is the New Black.” (Last year she won the award for Outstanding Guest Actress in a Comedy Series for the same role, making her the first actor since Edward Asner to win both comedy and drama Emmys for playing the same character – in his case Lou Grant on the comedy “The Mary Tyler Moore Show” and its drama spin-off “Lou Grant.”) Coupled with Jeffrey Tambor’s slam-dunk for Outstanding Lead Actor in a Comedy Series for “Transparent,” it was a strong signal that streaming services have staked their claim at the Emmys and everywhere else.

(On that subject: Isn’t it interesting that everyone who talks about such Netflix shows as “House of Cards,” “Orange is the New Black” and “Daredevil” always mentions Netflix in the conversation? The same is true of shows on Amazon and Hulu. Yet, nobody says “I watch ‘Scandal’ on ABC or ‘The Blacklist’ on NBC.”)

The many Emmys for HBO’s limited series “Olive Kitteridge” were not surprising, except perhaps for Richard Jenkins’ recognition as Outstanding Lead Actor in a Limited Series or TV Movie. The often under-appreciated Jenkins certainly deserved the award, though I continue to wonder what all of the fuss was about for this production, which was fine and all but hardly an amazing accomplishment that deserved an armload of top Emmys.

How wonderful that Regina King of ABC’s urgent and engrossing “American Crime” managed to dodge the “Kitteridge” steamroller and win for Outstanding Supporting Actress in this category. I’m grateful that “Crime” received some recognition on television’s biggest night. It deserved even more.

Lastly, count me among the millions of fans who were thrilled to see Viola Davis of ABC's "How to Get Away with Murder" win as Outstanding Lead Actress in a Drama Series, not simply because she made history but because she deserved to be honored for so impressively inhabiting the role of the all-powerful yet always vulnerable Atty. Annalise Keating -- the best and most complex character written for a woman since Claire Danes mesmerized us as the fascinatingly effed-up Carrie Mathison on Showtime's "Homeland" (something Danes continues to do).