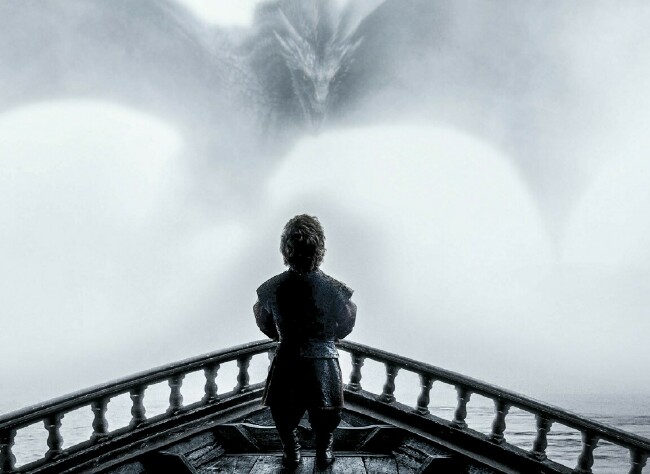 When it comes to nominating top talent, it is increasingly clear that Emmy and I don’t think alike.

Just look at the differences between my suggestions in the Drama Series and Comedy Series categories and the actual Emmy nominees for both, which can be read in their entirety (along with nominees in every other category) here.

On the subject of Drama Series, I’m pleased that voting members of the Academy of Television Arts & Sciences agreed with me that AMC’s “Mad Men” and Netflix’s “Orange is the New Black” deserved recognition, and I’m thrilled that they also acknowledged the enduring appeal of PBS’ “Downton Abbey,” a show the critical hive mind does not care to continue championing at this point.

On the other hand, I can’t agree that AMC’s “Better Call Saul,” which was uneven at best during its freshman season; Netflix’s “House of Cards,” which seemed to be spinning its wheels in its third season, and Showtime’s “Homeland,” which was better in season four than it had been in seasons two and three but never came near the level of greatness it maintained in season one, are more deserving of Emmy recognition than the sublime final season of FX’s “Justified,” the same network’s consistently and egregiously ignored masterpiece of conspiratorial menace “The Americans” and Fox’s wildly entertaining “Empire,” which did more to get people excited about television than anything else this year.

As for HBO’s nomination champ “Game of Thrones” (pictured at top), I’ll admit that I’m beginning to lose interest in it. But I can’t really fault its nomination for Outstanding Drama Series given the epic scale of its production, the quality of its acting, its unparalleled attention to detail and those awesome dragons.

My choice for the win here would be “Mad Men” or “Downton Abbey.”

Meantime, I’m good with nominations for Jon Hamm of “Mad Men” (pictured below) and Bob Odenkirk of “Better Call Saul,” each of whom shone even in substandard episodes of their shows, in the category of Outstanding Lead Actor in a Drama Series. I thought Matthew Rhys of “The Americans” gave the performance of the year in this category, but Emmy snubbed him once again (along with his show and his co-star Keri Russell), so I’d really like to see Hamm take home the award. No actor on “Mad Men” has ever been honored with an Emmy, so why not wrap it up with one for its very deserving leading man? 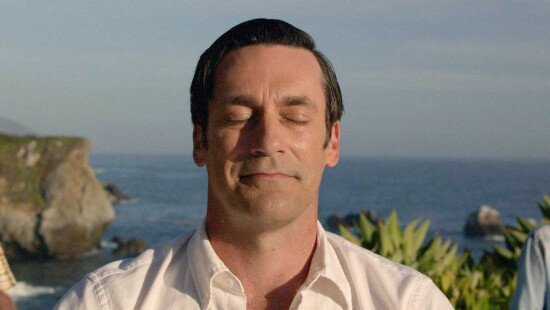 I thought Charlie Hunnam was riveting in the highly emotional final season of FX’s “Sons of Anarchy” and that Freddie Highmore was never less than fascinating as his psychotic character began to take on the characteristics of his manic mother in A&E’s “Bates Motel,” but Emmy didn’t agree. As for Sam Heughan of Starz’ “Outlander,” his devastating work in the last two episodes of the first season should have put him at the top of this list, but perhaps those Emmy folks had not yet seen them when they chose their nominees. If they did see those episodes I can’t imagine how or why they overlooked him.

Instead we have Kyle Chandler of Netflix’s “Bloodline,” Jeff Daniels of HBO’s “The Newsroom,” Liev Schreiber of Showtime’s “Ray Donovan” and Kevin Spacey of “House of Cards.” I wasn’t knocked over by any of those guys (as I was by Hunnam, Highmore, Heughan and Rhys). They all gave performances I would describe as strong but unremarkable. I wouldn’t have cared if one of the actors I chose had been bumped in favor of Timothy Olyphant, whose unfailingly compelling work throughout the final season of “Justified” was so subtle it must have escaped the voters’ notice.

Among the actresses, the nomination for Tatiana Maslany of BBC America’s “Orphan Black” (pictured below) is something of an embarrassment – not because she doesn’t deserve recognition (she’s brilliant in her portrayal of multiple clones) but because she also deserved to be nominated for the show’s first and second seasons, when everything about it was better than its third (the exception being Maslany’s fearless performance). I wouldn’t necessarily have acknowledged her work in season three, but I’m not going to complain. 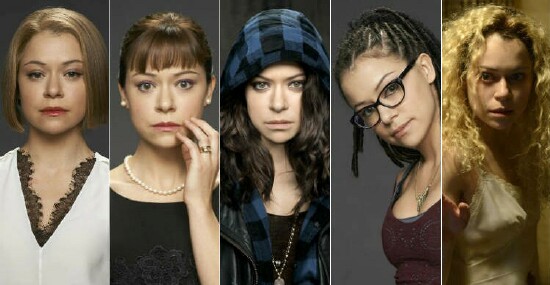 I will complain, loudly and for as long as anyone cares to listen, about the boneheaded snub of the breathtaking Eva Green in Showtime’s “Penny Dreadful.” I thought hers was the best performance by any actress in any television series during the last year. Maybe she’s in a special class with Maslany and will have to continue killing it in every episode for another season or two before voting members of the Academy finally understand what she’s doing.

It’s also upsetting that Vera Farmiga isn’t among the nominees in this category, given the mammoth complexity of her role and her performance on “Bates Motel.” Also, how do they not nominate Julianna Margulies for “The Good Wife” after awarding her the Emmy last year? Her work was equally powerful this past season, if not more so.

The bottom line is that this is an impossible category. Maslany’s fellow nominees – Claire Danes of Showtime’s “Homeland,” Viola Davis of ABC’s “How to Get Away with Murder,” Taraji P. Henson of “Empire,” Elisabeth Moss of “Mad Men” and Robin Wright of “House of Cards” (without doubt the best reason to keep watching that show) – were all brilliant. I think this one comes down to Davis or Henson, but Maslany really ought to be honored for her work in all three seasons of “Orphan Black.”

In the Outstanding Supporting Actor category I’m reasonably sure that Jonathan Banks of “Better Call Saul” (pictured below) or Ben Mendelsohn of “Bloodline” will take home the award. I’m good with either. (My preference would be Mendelsohn, but my prediction is Banks.) 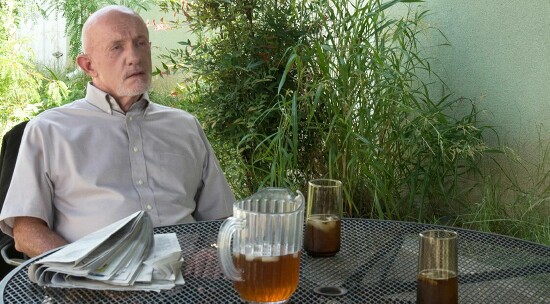 I had hoped to see Mandy Patinkin and Rupert Friend nominated for their searing performances in “Homeland,” as both did the best work they have ever done on this show. Instead, the show itself and star Danes were favored. Tobias Menzies was electrifying in “Outlander” (especially in his scenes with Heughan) and Walton Goggins was his usual extraordinary self in “Justified.” (The final scene between Olyphant’s Raylan Givens and Goggins’ Boyd Crowder in the series finale was a master class in dramatic acting on a par with the co-dependent performances of Colin Firth and Geoffrey Rush in “The King’s Speech.”) But the Emmy nominators didn’t agree, instead choosing Jim Carter of “Downton Abbey,” Peter Dinklage of “Game of Thrones,” Alan Cumming of “The Good Wife” and Michael Kelly of “House of Cards” as their actors of choice in this category.

Christine Baranski of “The Good Wife” is the only nominee in the category of Outstanding Supporting Actress in a Drama Series who was also one of my choices. She certainly belongs there, but so do the other actresses I singled out: Joelle Carter of “Justified,” Jane Fonda of “The Newsroom,” Charlotte Rampling of BBC America’s “Broadchurch,” Maggie Smith of “Downton Abbey” and Lorraine Toussaint of “Orange is the New Black.” I’m good with Christina Hendricks of “Mad Men” and Uzo Aduba of “Orange” making the cut (in place of Fonda, Toussaint and/or Smith), but much less comfortable with Joanna Froggatt of “Downton” (who didn’t really have much to do last season on “Downton”) and Lena Headey and Emilia Clarke (pictured below) of “Game of Thrones” being chosen over Rampling and, especially, Carter, who like co-stars Olyphant and Goggins was simply sensational in every way. 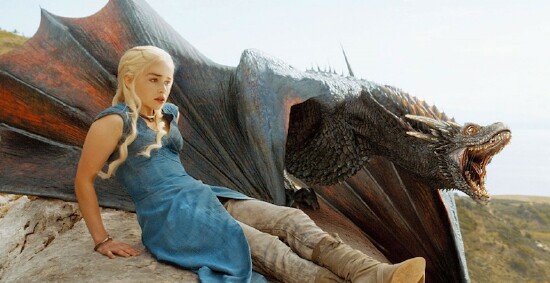 Apparently Emmy decided there would be no justice for “Justified.” Room wasn’t even made for guest actors Sam Elliott and Mary Steenburgen, both widely praised just about everywhere for the drama they brought to the show. “Justified” was one of the best series of the last ten years and its cast one of the best on television. What a bummer to see it ignored at the last.

Next: A look at the Comedy Series nominations