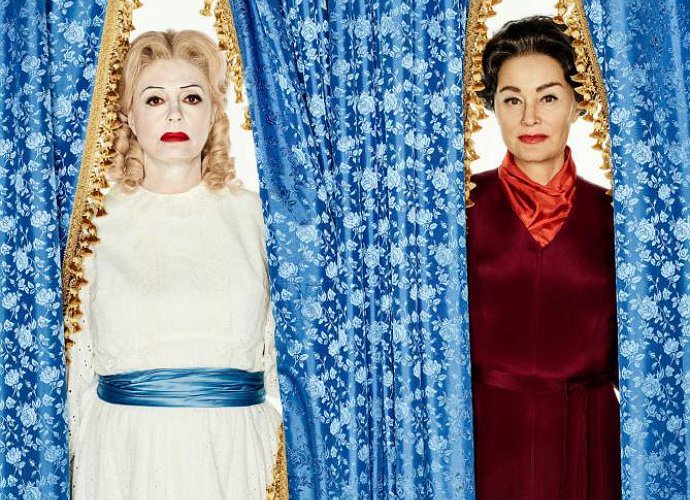 The resurgence in recent years of the Limited Series format -- brought about at first by Ryan Murphy's American Horror Story franchise on FX -- has seen it develop as the television genre of choice for some of the entertainment industry's biggest stars.  As a result, at the Emmys and other awards the Limited Series acting categories (which make room for nominees for TV Movies as well) are now often the most exciting.  Just consider the Emmy nominees this year in the category of Outstanding Lead Actress in a Limited Series or Made-for-Television Movie, which includes Academy Award winners Jessica Lange (pictured top right), Susan Sarandon (top left), Nicole Kidman and Reese Witherspoon.  As with the Drama Series and Comedy Series categories, there is no shortage of deserving programs and performers in this arena.  But the oversights weren't as egregious as in the other two categories. What follows is the third and final installment in my three-part series looking at the Drama Series, Comedy Series and Limited Series and Movies categories.  Who was left out?  Who will win?  Who should win?  Who knows?  And who can resist finding out when the Emmy Awards are televised this Sunday on CBS?

Notable oversight:  Gilmore Girls: A Year in the Life (Netflix). Television is overrun these days with reboots, returns, remakes and rehashes -- and almost all of them disappoint.  Gilmore didn't; it was a perfect continuation of the original series, skillfully righting the things that went wrong during its final season, advancing the personal stories of all of its characters in ways that made sense, acknowledging the passing of one of its beloved stars (Edward Herrmann) and, at the last, revealing the famous "final four words" that series creator Amy Sherman-Palladino had been talking about for years. Plus, the four-part return was entertaining in all the right ways.  So why not acknowledge a job very well done that meant something to millions of viewers?

Preference:  Feud: Bette and Joan.  Early in 2017 I called it the Program of the Year and I'm sticking to that assessment -- although HBO's Game of Thrones this summer gave it a run for that honor with its most thrilling season yet.

Prediction:  Big Little Lies.  A fine production, but in my opinion one of the most overrated shows of the year.  That doesn't mean that I think it was bad; only that it is not nearly as cosmic as the still-building buzz around it would suggest.

Prediction: The Wizard of Lies

Preference:  Ewan McGregor, Fargo.  Narratively speaking this was the weakest of the three seasons of this powerful franchise.  But it was filled with the finest performances of all.  McGregor did an extraordinary job playing very different brothers dealing with extremely different crises.

Prediction:  Geoffrey Rush, Genius.  The smart money seems to be on Robert De Niro for The Wizard of Lies, but I get the feeling there is going to be at least one well-deserved upset in the Limited Series/TV Movie arena.  A win for Rush could be it.

Notable oversight:  Oprah Winfrey, The Immortal Life of Henrietta Lacks (HBO).  Winfrey was snubbed, but it isn't as though the six women nominated didn't deserve recognition.  This is the easily the season's most difficult category in every way.

Preference:  Jessica Lange, Feud: Bette and Joan.  She became Joan Crawford without ever coming across as a cariacature, banishing memories of Faye Dunaway's ultra-campy portrayal of the legendary and legendarily tormented actress in Mommie Dearest.

Prediction:  Nicole Kidman, Big Little Lies.  Kidman seems to have come out on top as the aforementioned buzz for her show has continued to build.

Notable oversights:  Benito Martinez, American Crime.  A study in shattering sadness as a desperate father searching for his missing son.

Preference: David Thewlis, Fargo.  So thoroughly slimy and revolting as vile villain V.M. Varga I half expected insects to crawl out of his ears.

Prediction:  Stanley Tucci or Alfred Molina of Feud: Bette and Joan.  It is entirely possible that the only performer to be honored in this fearless examination of how Hollywood treated women of a certain age back in the day (and, some would say, continues to do so today) will be a man.

Preference:  Judy Davis, Feud: Bette and Joan.  With all due respect to the magnificent Jessica Lange and Susan Sarandon, Davis quietly and with great understated power stole the show as merciless and misunderstood gossip columnist Hedda Hopper.

Prediction:  Regina King, American Crime.  This will be the third consecutive year that King goes home as the only actor in one of television's most extraordinary and diverse ensembles takes home an Emmy.