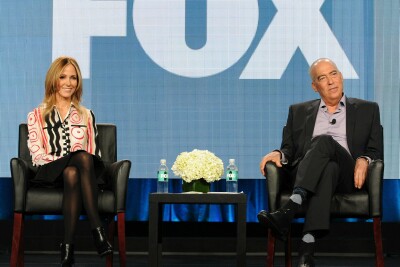 Pasadena, CA -- Fox's day at the Winter 2015 Television Critics Association tour was notable for two reasons: It began with the first appearances at a TCA tour by new Fox Television Group Chairmen and CEOs Dana Walden and Gary Newman and ended with a rousing panel for the first fresh television success of this new year, the unashamedly adult prime time soap opera "Empire."

The session with Walden and Newman was rather low-key, but that was because they have only been in their new positions for six months and the press has yet to see the new programming they are developing. It was more of a getting to know you session, as the two talked about their long history of working together and the standard challenges new network chiefs face when they are brought in to reverse said network's sagging fortunes. They made a few announcements, the most exciting being the casting of the upcoming Ryan Murphy comedy horror anthology "Scream Queens." Lea Michele of "Glee" and Joe Manganiello of "True Blood" have joined the previously announced Jamie Lee Curtis and Emma Roberts as series leads. Unless this project goes to pieces expect it to be one of next season's most talked about broadcast freshmen.

They also announced that Julianne Hough and Vanessa Hudgens have been cast in the network’s live production of “Grease,” which will be telecast January 31, 2016.

There is no denying the fact that after a desultory fall season the strong ratings this month for the premiere of "Empire" and its all-important second episode gave Fox a much needed shot in the arm and also added an extra boost of enthusiasm to its day at TCA. (I found myself wondering how Fox's overall presentation would have played without the building anticipation for the "Empire" panel, which was the last session of a long day. What a difference one hit makes.)

The eager anticipation for the "Empire" panel that powered the day was indeed a signal that, for Fox, times have truly changed. For most of the last 13 years the network's annual panel for "American Idol" has been the highlight of its Winter TCA day, going all the way back to the Simon Cowell-Paula Abdul-Randy Jackson period. That wasn't the case this time. It was all about "Empire."

Still, it was hard not to take notice when the "Idol" took to the stage, including Ryan Seacrest, Jennifer Lopez, Keith Urban and Harry Connick Jr. and new mentor Scott Borchetta. It is simply impossible to not react when Lopez enters a room. The same might be said for Urban. (Several young contestants from "MasterChef Junior," who had been here earlier in the day to take questions and teach critics how to make cake balls were seen and heard excitingly racing through the lobby area of the Langham Huntington Hotel, home of this tour, when word spread that Urban was in the house.)

For all of the audience erosion "Idol" has suffered in recent years, it is still one of the highest rated and most written about programs on television. But interest and excitement in "Idol" was eclipsed by the anticipation of and reception for the cast and producers of "Empire." Anyone in the room, or reading the tweets that were flying out of the room, would have come away with the idea that "Empire" is the hottest show on television. It certainly seemed to be the hottest show of the entire tour – and a game-changer for Fox.

The wild enthusiasm for "Empire" was two-fold. First, critics and bloggers were happy to see a true over the top, guilty pleasure, prime time serial back on the pop culture radar because such shows are always fun to write about. Second, behind the scenes and in front of the camera, "Empire" fits very nicely into the escalating discussion about diversity in television. It hasn't escaped anyone's notice at this tour that "Empire" and ABC's "How to Get Away with Murder" and "black-ish" are three of the most successful new series of the 2014-15 season.

And then there was "Empire" lead actress Taraji P. Henson. She isn't an unknown actress, having been honored with an Academy Award nomination for her role in the 2008 film "The Curious Case of Benjamin Button" and having starred for three years in CBS' "Person of Interest." Nevertheless, it seemed that a star was born during the "Empire" panel, as Henson lit up the room on arrival and continued to do so throughout the session. Her character's name is Cookie. The expression "Its Cookie Time" is already a thing and has trended on Twitter.

This is arguably the best news Fox could have hoped for coming out of its day at TCA.