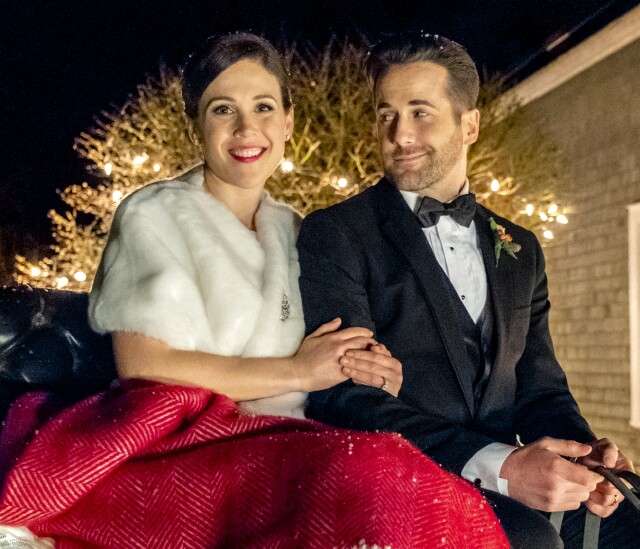 As Christmas approaches, Hallmark Movies & Mysteries is getting into the holiday spirit with its “Miracles of Christmas” programming event and the premiere of Marrying Father Christmas.  It's the third in the network’s Father Christmas series, starring Hallmark favorites Erin Krakow and Niall Matter.  The franchise began three years ago when Miranda Chester (Krakow) embarked on a journey to learn about the biological father she never knew.  Along the way she met the love of her life Ian McAndrick (Matter) and became a part of a family (after losing her mother over the holidays as a child).  Needless to say, the Miranda in Marrying Father Christmas has come a long way from the one viewers met in Finding Father Christmas.  "The first one was about these two people finding each other and realizing they were in love,” explained Krakow when she sat down with MediaVillage to chat exclusively about the project.  “In the second one Niall's character proposed.  The third is about the wedding.  [So] Christmas has really become a happy time for Miranda, and in this installment you really see that.

"That's a major change for her and overall I think there's a lot more joy in her life,” she continued.  “She’s marrying the love of her life [and] has this new family that loves and supports her, so her life has exploded in a very positive way."

Miranda's three-year journey to the altar has been a delight for Krakow to play.  Given her own upbringing was nothing like that of the character, the acting challenge it has provided is one she cherishes.  "I have a mom and dad who after all these years are still madly in love and a younger brother," she shared. "I was always surrounded by biological family [over the holidays] and of course friends, so I can't really relate to what Miranda has experienced.  But that's one of the wonderful joys of being an actor.  We get to imagine and play pretend.

"I think everyone has experienced some sadness or had a bout of loneliness,” she added.  “I know I have.  So, I drew from that.  Imagining it is really all it takes. She lost her mother, never knew her father or of any other family.  Her mother was all she had.  That is a lonely existence.  Finding who her father was in Finding Father Christmas, then finding love at Christmas, has really turned the holidays around for her completely."

To Krakow, the three films encapsulate the story of a search for love, family, acceptance, belonging and finding all of those things in Christmas.  “That's what makes these films special to me,” she said.  “It feels like a true depiction of how the holidays can be complicated, but at the end of the day are really very joyful.”

Reuniting with her Father Christmas family was a plus.  “There's a real comfort to working with people you've worked with for years,” she explained.  “Working with Niall is very similar to how I feel going back to film When Calls the Heart with that family.  I hadn’t met him before we started Finding Father Christmas, but we discovered early on that we share a very silly sense of humor and had such a great time together.  We actually spent a lot of time on the phone for the sequel and this one, talking about our characters’ directions and how we wanted to play things.”

The only drawback to the movie’s premiere on November 4 is that it’s likely the last -- something Krakow is lamenting.  “The films are based on books by Robin Jones Gunn and unfortunately, this is the last in the book series,” she revealed.  “I think this is probably a trilogy and will stay as such.  It's kind of sad because I really enjoyed working with this group.  Niall and Wendy (Malick) have become like a little family in the three years we’ve spent together.  So that part of it is sad, but hopefully we’ll work together on other things.”

While she’s hopeful for another movie, until then Krakow is anticipating the return of her flagship Hallmark series When Calls the Heart (which has wrapped a sixth season) in 2019 and a When Calls holiday movie debuting on December 25.  She’s also looking forward to celebrating a little thing called Christmas. “Christmas has really become about a lot of Hallmark joy,” she shared.  “It seems there’s always a wonderful Christmas movie to promote, so it's been nice to celebrate with my fellow cast mates and live tweet with the fans as the holidays are a great time to come together with family.

“I do love Christmas and working for Hallmark Channel and Movies & Mysteries,” she concluded.  “It's a great home and I know I keep mentioning 'family' but Hallmark really is like that.  The Hallmark events we have twice a year [during the Winter and Summer Television Critics Association tours] feel like a high school reunion or something.  You run into different actors from different movies, along with the network executives, who are also generous and kind.  It's a real pleasure working at this company.  It's not shocking that they named their talk show Home & Family.  That's really what it is like.”