By J.P. Fields December 20, 2016 View from the Grandstand Archives 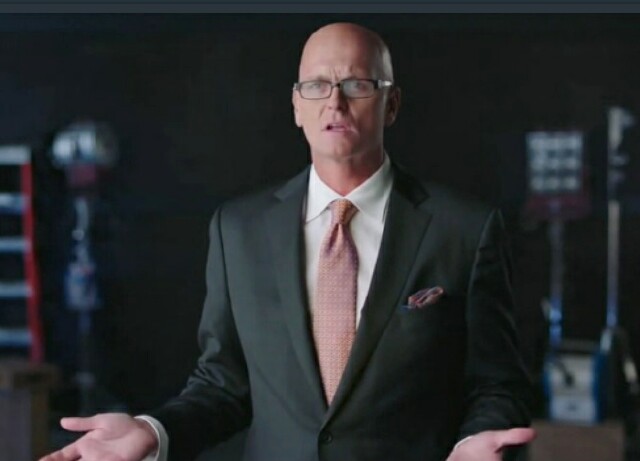 This fall Arby’s and ESPN CreativeWorks enhanced their existing relationship by running a pair of spots centering around Scott Van Pelt (pictured at top), the anchor and on-air personality who heads the sports giant's midnight edition of SportsCenter. The spots, titled Suit and ESPN: Basketball with Garbage, riff off the well-known and long-running creative (anchored by the tag line “We Have the Meats”) for the quick service restaurant developed by Minneapolis-based Fallon. They are examples of how ESPN CreativeWorks "amplifies" work from a main creative campaign. (Read more about ESPN CreativeWorks.)

Arby’s President and CMO Rob Lynch, who joined the company three years ago, said the company has transitioned from a local to a national media player, with a significant commitment to sports.  "ESPN is our largest media partner," he noted. "It's been a very productive relationship with traditional media buying  on TV, as well as some digital, which they are really trying to get us to become a bigger part of."

Lynch said ESPN CreativeWorks "brought" the Van Pelt concepts to Arby's. He noted that Fallon has generated creative that has been a bit quirky and funny, and these executions are in tone and tune.

"I told our internal team and agency that ESPN CreativeWorks knows what they're doing in terms of leveraging their talent and that their work resonates," he said. "I’m a big fan of theirs and I said let them drive the bus and they did.  They came back with ideas and we made sure they worked with our brand."

Carrie Brzezinski, Vice President, Marketing Solutions, ESPN CreativeWorks, said Arby's had been purchasing time, notably within Van Pelt's midnight SportsCenter show. Concepts became tied together from there, including adding the Arby's hat to Van Pelt's bald-headphone logo [seen at the top of the show], as well as SportsCenter's famed "da da da" aural signature, and the adapted tag line, "Scott has the meats."

Lynch noted that the two spots were shot together.  All told, the project took about six months from concept to air, having hit ESPN properties about a month ago.  "The whole process came together pretty quickly,” he said.  “It was easy to work with [CreativeWorks].  It was a collaborative effort and not a battle over creative or anything like that."

In Suit, Van Pelt is preparing to go on the air with a garment festooned with an array of Arby's logos. "It's more subtle than I was thinking," he deadpans, alluding to the jacket.  "We're not done," an assistant, says,” before providing the final touches:  An Arby's name tag and a potato cake lifted up from his breast pocket, handkerchief-style, as the anchor identifies the product. As  Van Pelt leaves the dressing room, the back of his jacket illuminates with a large rhinestone Arby's hat, housing the words "Arby's Roast Beef Sandwich is Delicious."

"With the potato cake thing I laughed a lot," said Lynch.  “I’ve said this before: Our stuff is so stupid, it’s awesome!"

The other spot, ESPN: Basketball with Garbage, features Van Pelt explaining that among the perks of the Arby's sponsorship are a host of things lying around that can be helpful during downtime. 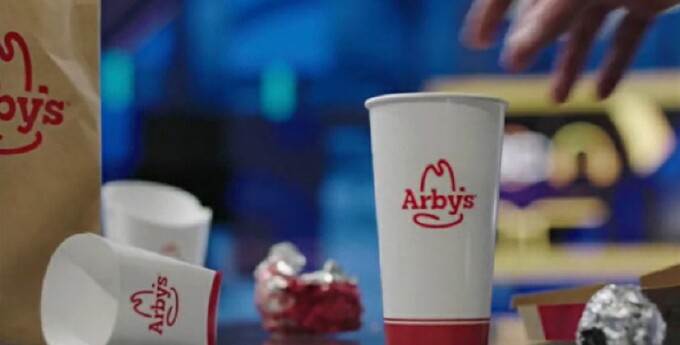 Touting "Arby's ball," he explains the point values of the "brand new sport" in which rolled up pieces of paper are launched toward the company's cups serving as basketball hoops. After a number of failed attempts, with empty bags and side containers in the background, Van Pelt concedes, while sipping a drink, "We're really just playing basketball with garbage."

The commercials are in rotation across ESPN linear properties. The restaurant receives added exposure on the Van Pelt-version of SportsCenter, which is "brought to you by Arby's."  The spots also appear in pre-roll positions on video clips on ESPN's digital holdings.

"You know you’re doing something right, when everybody you know is texting or calling, saying they love the Van Pelt spots," Lynch enthused.  Although he said the parties "have not specifically talked about what’s next, you're always thinking about more when you're happy with the work."