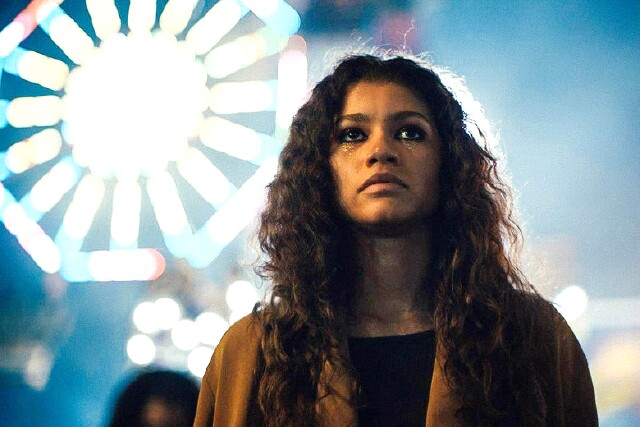 When I talk about dramas, specifically the really great ones, I feel like I’m always going down a specific checklist of qualities that more or less doesn’t change.  Finding a series that checks most of, not even all of, those boxes is usually a thrill on its own, probably because we are all flawed human beings, and like us, the shows we make will just never be “perfect.”  HBO’s Euphoria might be the exception to that rule.  Tell me you found something wrong with this series if you want, but then we’d never speak again, because obviously you’d be a pathological liar who can’t be trusted.  It may sound extreme, but Euphoria really is that great.

Euphoria follows a high school girl named Rue (Zendaya).  She’s an addict, fresh out of rehab and integrating back into her normal life just before the summer ends and high school starts back up.  She narrates her story, sometimes unreliably according to her, with a voiceover that heavily implies that everything we’re seeing already happened.  We watch her, and the people she knows well enough to tell their story, play out moments of angst and anxiety, sexual encounters, physical altercations and drug use that are still only a surface scratch compared to the levels of character-developing trauma each of these have people have buried within them.

Visually, Euphoria is everything I could have wanted in a show like this.  It is stylistic, creative and invaluable as an integral part of the storytelling.  The lighting, the colors, the visual effects (what tastefully little there are) all work in concert to paint a painfully candid portrait of someone in the throes of addiction, as well as moments of fear, lust, aggression and the like. Honestly, whenever I’m talking about excellent cinematography on a television show, this is exactly what I’m talking about.  The camera moves in ways that weren’t expected but make perfect sense.  Take notes, class.

The soundtrack of this series reaches a similar level of perfection, with every song obviously having been picked with a purpose, and a score that matches the mood of each scene in exactly the right way.  I’ve no doubt that HBO’s music licensing budget definitely came in handy, because almost all of these tracks are bangers.  These are all songs that people actually listen to, just like the supposedly present-day characters we’re watching, not just whatever songs that the production could afford.  It makes sense, though, when you consider that both Drake and Future are credited as executive producers.

Which brings us to Zendaya.  These days she’s probably most known for being “MJ” in the Marvel Cinematic Universe, but for me what always comes to mind is the underrated family action comedy TV show in which she starred, Disney’s KC Undercover.  As KC she was strong, whip smart and athletic, making her an excellent spy.  Thiswas a Disney show, however, so she was also a pretty wholesome and generally well-behaved kid.  Rue?  Not so much.

Zendaya’s Rue is smart but troubled, and straight up duking it out with a multitude of mental and emotional conditions, on top of all the average modern-day American teenager bullsh*t that every kid has to deal with in some way.  Rue’s reaction to it all, which includes the passing of her father, is not an uncommon one.  There’s a sort of noise that stress of life can make, and some of us get dealt hands that make all the chaos even louder.  Drugs are usually a pretty good way to press mute on all that, albeit an ill-advised one.  Zendaya’s ability to not only accurately depict the very raw moments that occur when people who love you are just trying to protect you from you, but also her moments of bliss, however fleeting, are right on point.  She’s already resigned herself to the idea that the world is trash, and she didn’t trash it, nor is she here to fix it.  There’s a likable, kind of sad cynicism about her.  She knows she’s a shittier person than she has to be sometimes -- as most full-on, drug-test beating, manipulative addicts are -- but that moment where nothing matters … to her, it’s better than anything.  The anxiety is real.  It seems like a silly thing to say sometimes, given an actor’s job is to be convincing, but Rue feels authentic.

Of course, Zendaya’s not the only character on the show.  Rue’s sister, Gia, is played by the scene-stealing Storm Reid (A Wrinkle in Time, When They See Us).  Gia and her mother (Nika King) witness Rue’s not-so-subtle deterioration and are the emotional anchors that tether Rue to reality, however loosely.  The toll it takes on them is more than apparent, evidenced specifically by the scene in which Gia finds Rue in her room unconscious, having OD’d.  Again, the realer this all feels, the better, and it does.

I think that’s the beauty of this particular project being at HBO.  The level of freedom allowed with language, nudity, subject matter, episode length and budget all serve the project as a whole.  I can’t imagine a more restricted version of this show, though I’m sure the creators of this truly stunning piece of work could pull it off.  Euphoria deals with some heavy issues -- including, but not limited to, sexuality, sexual assault, the role modern technology plays in young social lives today, drug culture, drug addiction and parenting -- and having the room to deal with these topics in an honest and uncut way was truly invaluable to them.  People who deal with or have dealt with these types of issues in their lives or the lives of a loved one will absolutely recognize some real-world behaviors and imagery. That’s not by mistake.

To top it all off, the show also lists a number for a wellness hotline at the end.  Entertaining, enlightening, gripping and intimate, Euphoria is top-tier television, baby.  If this show isn’t perfect, it’s damn close.

Euphoria is telecast Sunday at 10 p.m. on HBO.