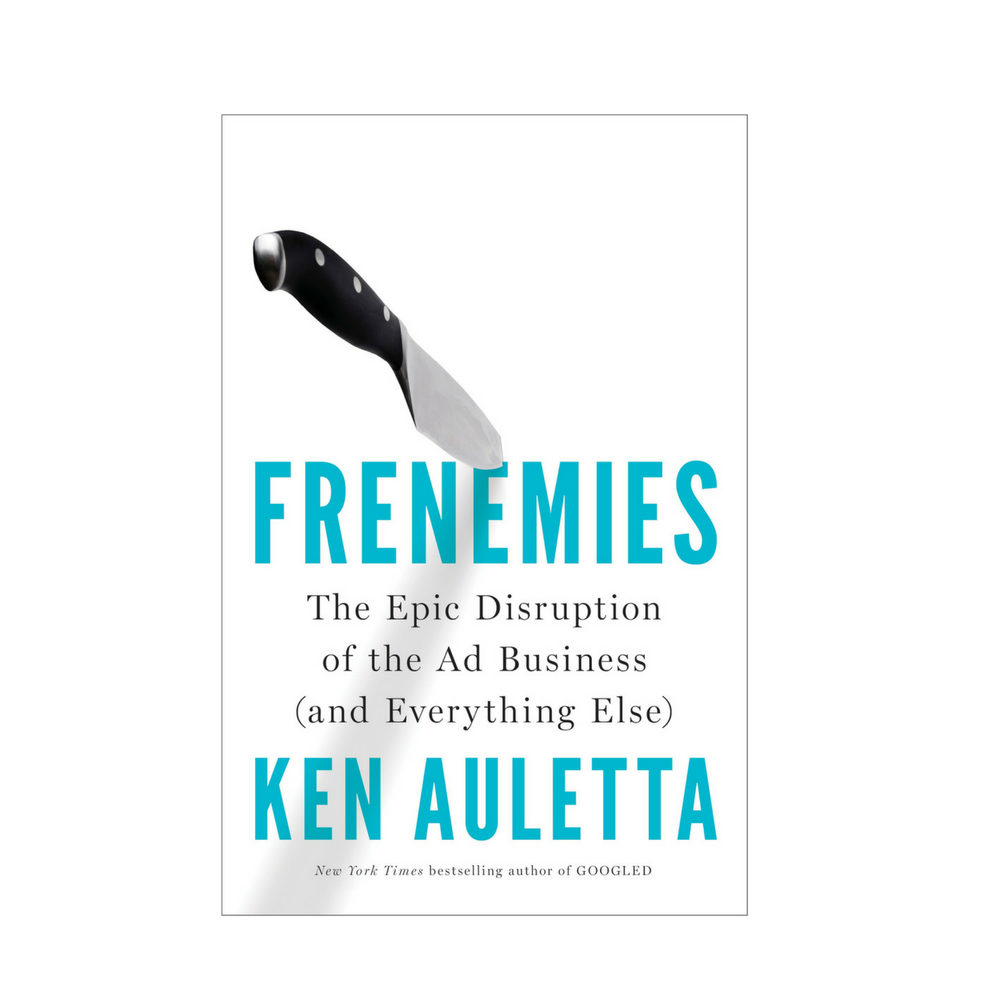 Ken Auletta believes that "advertising is a central institution to our economy, a vital business, a reflection of free enterprise and an essential tool of democratic capitalism."  Yet it is being assaulted.  "A once comfortable agency and media business is now assailed by frenemies, companies that both compete and cooperate with them," he says.  "The argument that the subscription model will replace advertising is fallacious.  Yet, the 30-second commercial is dead; how do you do a 30-second ad on mobile screens?  Fifty-five percent of people who record programs skip the ads; they're annoyed by pre-rolls; the more advertisers know the better they can target, but then privacy issues loom large."

In Auletta's new book, Frenemies:The Epic Disruption of the Ad Business (and Everything Else), he quotes an e-mail sent to him by R/GA founder Bob Greenberg:

"The Agency Model is dead. It's 70 years old and they're still holding on to The Art of Persuasion as everything is deconstructing around them.

While Auletta positions Greenberg as a visionary who has built an agency model for the future, he told me in an exclusive interview, "I don't think the agency model is dead.  It needs to be changed and Greenberg is changing to be a VC, a design firm, a problem solver, a new kind of marketing enterprise.  He's walking the walk.  Agencies are still alive but changing dramatically, which is a reason to do a book like Frenemies.  In all my books and my work with The New Yorker I've focused on two types of people.  One sees new competition and says, 'Change is a problem. Woe is me.' Others say, 'Change is an opportunity and I will use it as a spur to change my business or I will die.'  That's what Bob is actually saying.  Change or die."

In Frenemies, Auletta presents a cogent and coherent view of the realities confronting the media, advertising and marketing business through the eyes, words and experiences of a "range of important protagonists in the business, including WPP's Martin Sorrell, GroupM's Irwin Gotlieb, Unilever's Keith Weed, Bank of America's Anne Finucane, R/GA's Bob Greenberg, Facebook's Carolyn Everson and MediaLink's Michael Kassan.  Ultimately," he says, "I try to tell a story of a world whose fate hangs in the balance, and why that fate matters to us all."

Kassan is the leading protagonist, the common thread whose story and relationships are weaved throughout the book.  Why Kassan?  "He's a fascinating character," Auletta says.  "He ignites interest like historic political power brokers.  As I'm quoted in the book, 'Michael is a maestro at convincing people they can't do business without him.  He is the most powerful of the power brokers in that business.  No one comes close.'"

In many of Auletta's previous books and his acclaimed series of articles in The New Yorker'sAnnals of Communicationscolumn he skewers his leading characters, and Kassan acknowledges he was concerned as Auletta became increasingly embedded in the MediaLink organization for more than a year and spoke to hundreds of Kassan's clients, colleagues, friends and detractors.  Ultimately, Kassan emerges as a sympathetic character and positive industry force who Auletta acknowledged during a recent ANA conference interview is "likeable."

Others don't fare as well in Frenemies, although no individual emerges as a definitive counterpoint to Kassan.  While some of the book's leading characters have since left their senior industry roles, most notably Sorrell and Gotlieb, Auletta points out, "If you're writing about disruption and change as I have been, one of the questions is, 'What's the ending?'  A motion picture is always moving; it doesn't stand still.  When you write a book about change happening every day, people leaving doesn't disrupt the flow of the book.  Departures reinforce the thesis."

"Martin Sorrell is a historic figure," says Auletta.  "He's an enthralling character and unfortunately his career may be defined by the way he exited vs. the 33 years he spent building WPP.  Sorrell was eloquent and right about the dangers of short-termism in business.  The advertising industry is frozen by anxiety and locked into the innovators dilemma.  Companies need to keep margins up, but they may be committing suicide as a result. Sorrell understood this."

Expanding on the theme of the innovator's dilemma, Auletta points to several industry sales executives.  "The guy at Fox, Joe Marchese, is a really creative guy trying to think outside the box about how to get messages out differently.  He's an interesting guy.  Jo Ann Ross at CBS, many think is the best.  She's an amazing character and great sales person.  A presence in the industry.  CBS may be wrong, though, to not change the number of ads in its programs.  One reason showrunners are going to Netflix is they can craft programs without commercial breaks, more like novels.  They can write for binge viewing.  Linda [Yaccarino of NBCU] is trying to do new things.  Facebook is competing against TV.  NBC is competing against Facebook.  There are unintended consequences to this competition that are a reflection of industry turmoil and insecurity.  The industry is not effectively responding to the challenges surrounding it.

"In the TV world, you can make the argument they all face the innovators dilemma – they have a lucrative business and every year the money comes in and yet they're selling to a smaller audience every year," Auletta continues.  "They'll respond that roughly the same people are viewing their programs, but they are not viewing the ads.  When I wrote Three Blind Mice: How the TV Networks Lost Their Way (1991, about ABC, CBS and NBC) advertising represented 95% of CBS' revenues vs. 46% today.  If it drops to 25% they're in trouble.  Where's the 54% come from?  Content sales, which feeds more OTT viewing?  Retransmission consent, but as cable bundles shrink, will cable continue to pay for less?  The idea that subscriptions will offset advertising declines is a pipe dream.  Netflix deals go to the bottom line, but the networks are building a frenemy.  Is it in their long-term interest?  I don't think so.  And how do we deal with the problem of young people not watching advertising?  Advertising needs to take different and better forms."

Auletta also challenges the marketing and advertising business on its lack of diversity and inclusion.  "The business is not changing fast enough," he asserts.  "In a LinkedIn study, marketing ranks eighth among eight industries in compensation.  If you have copywriters in the $50,000 salary range who may be talented but are inexperienced, and you're sending them to represent you to a client, the client may ask why is this person not the best. But the industry can't afford to pay like the consulting firms, Google or Facebook.  A young person who goes to Harvard or Rutgers [doesn't] dream of getting into the advertising business anymore.  As an industry we need to address the problem of not attracting the most creative and talented people.  That's a real problem."

Of the many topics Auletta could have considered for his next book, why did he decide to tell the story of advertising and marketing?  "For many years I examined advertising as an aspect of some other story I was telling," he says.  "It crept up on me that there was much to be learned by turning that around and looking deeply into the advertising industry itself, and through it out onto the wider world -- a world of A.I. and algorithms and Big Data.  These raise fundamental issues, including issues of privacy, issues of whether the science of advertising can replace the art, whether relationships still matter.  Advertising is an industry under existential assault."

Questioned on the potential interest to people outside of the narrow world of marketing, he responds: "I don't see Frenemies as a narrow book.  Most of the rest of world is dependent on advertising.  I go back to the point of leaning forward and seeing change as an opportunity to redefine the business and make it healthier.  But there are no answers; no clear solutions.  It's arrogant to proclaim whether advertising will grow, especially as the built-in conflict between privacy issues and wanting more data work against advertisers."

The core thesis in Frenemies is that the advertising industry's biggest frenemy is the public and that media, agencies and marketers are not doing enough to figure out solutions and prepare for the future.  The $2 trillion global business is "struggling … to figure out how to sell products on mobile devices without harassing consumers, how to reach a younger generation accustomed to dodging ads, how to capture consumer attention in an age where choices proliferate and a mass audience is rare."