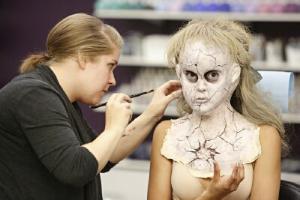 If I were a programmer at Syfy – or a producer or writer or director with a special affinity for horror movies – I would pay closer attention to that network’s best series, the makeup competition show “Face Off.” Every week this highly engaging unscripted program offers viewers something they can’t see anywhere else – the creation, from conception and early sketches through to the finished product, with detailed construction and execution along the way – of a dazzling array of fantasy and horror characters that sometimes seem ready for primetime (on Syfy or Chiller) if not for the big screen.

If I were a programmer at Syfy – or a producer or writer or director with a special affinity for horror movies – I would pay closer attention to that network’s best series, the makeup competition show “Face Off.” Every week this highly engaging unscripted program offers viewers something they can’t see anywhere else – the creation, from conception and early sketches through to the finished product, with detailed construction and execution along the way – of a dazzling array of fantasy and horror characters that sometimes seem ready for primetime (on Syfy or Chiller) if not for the big screen.

And yet to date I can’t recall even one of the hundreds of “Face Off” creatures created during the show’s eight-season run ever appearing in a movie of its own. (If memory serves there was a competition along the way that featured as its prize a very brief appearance by the winning character in one of Syfy’s signature cheesy movies. But, I think, that’s been it.)

It occurred to me while watching “Face Off” two weeks ago that I was seeing the creation of not one but two characters that were just perfect for movies (or extended movie franchises) of their own, either on Syfy or Chiller (which would make a lot of sense) or elsewhere. The characters were created during the “Deadly Dolls” challenge, which found the remaining five contestants (at the time) designing horrific creatures based on iconic dolls.

Darla Edin, who won the challenge that week, dazzled the show’s excellent judges (Glenn Hetrick, Ve Neill and Neville Page, pictured above), smart and charming host McKenzie Westmore and the other competitors alike with her creation – a truly creepy porcelain doll (pictured below with Darla) that had been broken and tossed away (perhaps the worst thing that can happen to a doll) and had come into the possession of an enchanted mirror that allowed her to attack people who were looking in other mirrors. 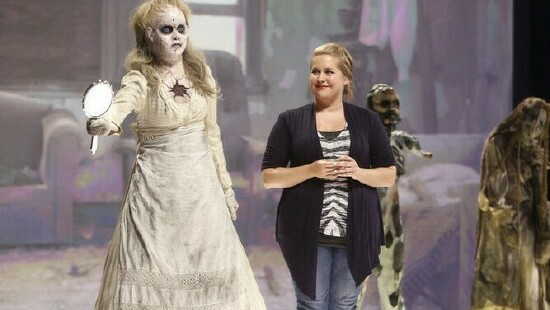 Emily Serpico, the runner up that week, used as her inspiration a traditional rag doll and developed an equally compelling creature: A doll (pictured below with Emily) that had been ripped apart by a dog and left to rot that became angry and vengeful because she wasn’t wanted (again, that’s not a good thing for a doll). The sadness that hung in the air around this doll was palpable, probably because of its flat blue button eyes and freakishly long hair, which created a sense of emptiness and despair – and, in this case, a deep desire to lash out. 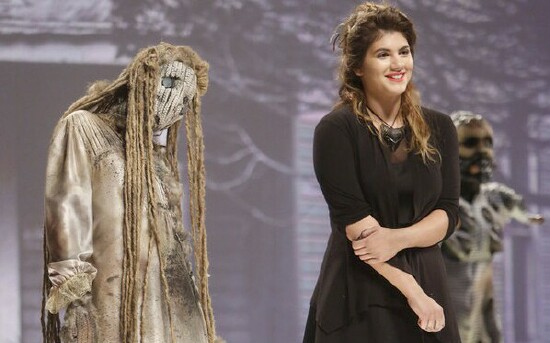 This week, by the way, Darla and Emily both advanced to the final three, along with Logan Long. They will compete in next week’s season finale.

While watching it took all of two minutes to flesh out possible stories for these two characters. (Darla and Emily had already done most of the work.) I got to wondering if anyone at Syfy was watching and, if so, if they were seeing what I was seeing and felt similarly inspired. Why not take a home-grown creation and run with it on the network that literally brought it to life, or license the character to somebody else and become known as the incubator for future horror franchises?

I’m sure it isn’t all that easy. I have no idea who owns the rights to creations on “Face Off.” The men and women who actually create the creatures before our eyes? The producers who come up with the challenges? The company that produces the show? Syfy/NBCUniversalCable/Comcast?

But certainly the possibility exists to try and maximize such creations. That’s one thing Lifetime’s “Project Runway” – like “Face Off” a superb creative competition series in what has become a burgeoning genre – does extremely well. Winning designs on “Runway” often make their way out into the real world with a great deal of fanfare, usually as a reward or prize for the designers. I recall that a “makeup,” as the final creatures on “Face Off” are called, was once featured in the annual Halloween Horror Nights exhibits in Universal’s Orlando and Los Angeles theme parks. I wonder why that doesn’t happen more often, because it’s clearly all in the family. 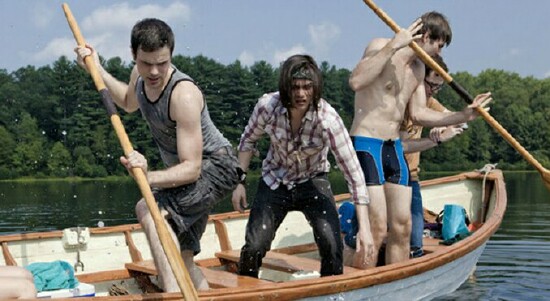 Syfy has produced dozens of low-budget, cheap and cheesy monster flicks in recent years, the most successful of which, “Sharknado,” instantly became and has remained a household word. For better or worse it became an important franchise for the network, which will debut a second sequel this summer. But I can’t recall Syfy ever producing a true horror film. I know that its sibling network Chiller has tried to do so, with limited success. Its best scary movie to date has been “Beneath” (pictured above), about a nasty fish with a taste for human flesh feeding on a fresh batch of Millennials stranded in the middle of a lake in a rowboat.

“Face Off” is burgeoning with original characters that are far more developed than that voracious fish in “Beneath.” So why not take a shot or two with some of the better creatures created on it?