Farewell (for Now) to "Marvel's Runaways" 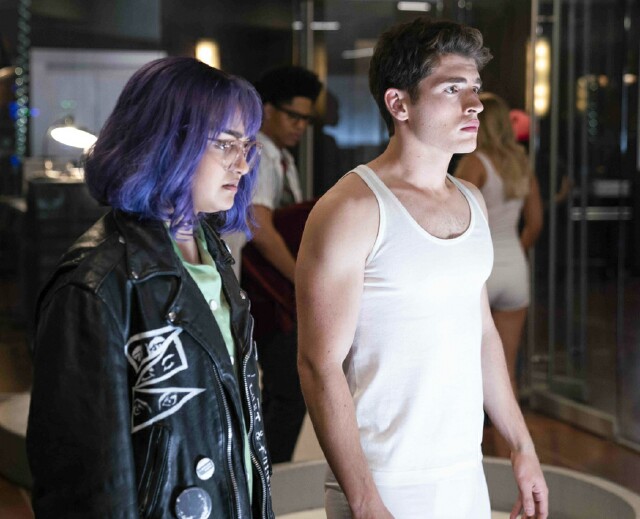 Hulu’s first foray into the ever-expanding Marvel Universe began in 2017 with Marvel’s Runaways, part superhero epic, part teen drama that captured audiences with its charming heroes, phenomenal villainous cast and impressive production values.  Showrunners Stephanie Savage and Josh Schwartz, the team behind the soon-to-be-rebooted Gossip Girl, have brought a massive shift to Runaways’ third and final season, leaving behind the more grounded and gritty drama we came to know and love and fully embraced the outlandish comic book origins created by Brian K. Vaughn and Adrian Alphona, even establishing some tie-ins to the previously loosely connected Marvel Cinematic Universe.  With the entire action-packed third season released on Hulu on December 16th, let’s dive in.  Buckle up, kids.  It’s about to get weird!

Returning to the series as the titular young heroes are Gregg Sulkin (pictured at top, right) as genius jock Chase Stein, Lyrica Okano as staff-wielding wiccan Nico Minoru, Rhenzy Feliz as tech brainiac Alex Wilder, Virginia Gardner as light-projecting alien-human hybrid Karolina Dean, Ariela Barer (pictured at top, left) as dinosaur-connected telepath (you read that right) Gert Yorkes, and Allegra Acosta as Gert’s super-strength-powered kid sister Molly, along with Clarissa Thibeaux as shape-shifting alien Xavin, an invaluable ally to the Runaways.  Also returning are the Runaways parents who also serve as our villains, under the veil of a philanthropic organization known as Pride. The group includes James Marsters and Ever Carradine as Victor and Janet Stein, Brittany Ishibashi and James Yaegashi as Tina and Robert Minoru, Angel Parker and Ryan Sands as Katherine and Geoffrey Wilder, Annie Wersching as Leslie Dean, and Brigid Brannagh and Kevin Weisman as Stacey and Dale Yorke. (Pictured below, left to right: Okano, Barer, Feliz, Gardner and Sulkin.) 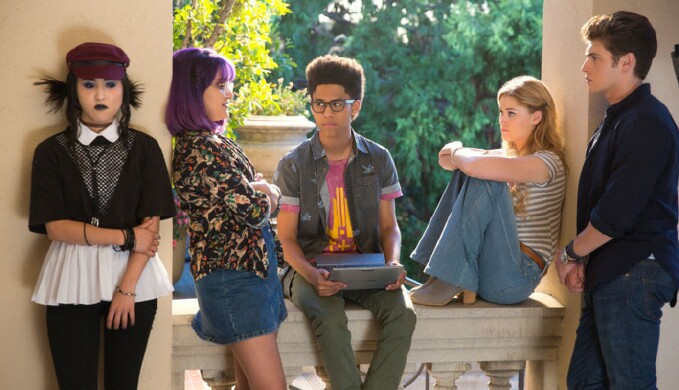 Last season, after a massive showdown against the villainous alien Jonah, the Runaways destroyed the ship that carried his extra-terrestrial family and Nico delivered a striking blow, seemingly killing him.  The alien lifeforms, however, moved on to other nearby host bodies, with Jonah possessing Victor Stein, his wife possessing Stacey and their daughter possessing Tina Minoru. After the conflict, Chase, Karolina and Janet Stein are captured and incapacitated by Jonah and his family.

Season three picks up moments after season two ended, with the Runaways set on rescuing their friends, stopping Jonah once and for all and bringing justice to the young lives lost at the hands of Pride.  Not only are the aliens a threat to the young heroes, but a dark force is also rising, aiming to take hold of Nico and her potentially limitless power, a threat led by Morgan Le Fay, a witch who was previously shunned away to the Dark Dimension by Tina Minoru, a fellow witch like her daughter.  Episode five of season three is a nightmare-fueled roller coaster with long sequences of hallucinations, powered by the Runaways’ deepest fears, biggest regrets and darkest secrets.  These nightmares fuel a tug-of-war at the center of Karolina and Nico’s relationship, with their yin-and-yang personalities and abilities being tested.

It should be noted that this season has connected the most with the Marvel Cinematic Universe, especially with the addition to the narrative of the Dark Dimension, an alternate reality consumed in darkness that was first introduced in the 2016 movie Doctor Strange.  The dark, cracked skin surrounding Nico’s eyes also reflects that of Strange’s archenemy Kaecilius, who drew his power from the Dark Dimension in order to summon it forward to consume Earth. The special effects used to portray Tina, Nico and Morgan’s mystical abilities also reflect those used in Doctor Strange.

Despite references to the MCU movies running throughout so many Marvel television series, especially the now-cancelled Netflix shows and the soon-to-end Marvel’s Agents of S.H.I.E.L.D., there remained a gap between the television and movie narratives.  And there was so much potential to bridge it!  Sadly, it seems we’ll never get to see that happen.

What this third season has explored so far are the sacrifices that parents are willing to make for their children, even if it means losing their lives.  While Pride’s actions are indeed criminal and monstrous, it is possible to see their dark, broken pasts as a (slight) justification for wanting a better world for their children, one where they will not need to worry or want for anything.

Runaways has always been more emotionally driven than its cinematic companions.  The pilot of the series alone dealt with rape, suicide and abusive relationships.  The first and second seasons made tremendous efforts in diversity, inclusion and representation of LGBTQ+ relationships.  Included on the canvas have been a successful black family that overcame adversity and an Asian-American family that has a leadership position in the tech industry.  Last season, there was a story about immigration involving another Runaway, Topher (played by Luis Castellanos), who bonded with Molly.  Nico and Karolina have one of the most beautifully handled LGBTQ+ relationships I’ve seen onscreen.  That’s not just because their personalities are so different, but because they’re both passionate, strong and willing to do anything for each other and for their friends, even if it means bringing justice to their parents.

And then there is Nico, who has moved front and center of late.  She is as complex as ever, taking on a leadership role among the Runaways.  She is very much at war with herself, trying to fight the darkness that is eating at her mind and soul, but wanting to use that very power to save her friends and do what she thinks is right.  Lyrica Okano’s performance is incredibly layered, and despite having some phenomenal scene partners she stands out among the young cast.

At the end of the day this show is about family.  Not just the relationships between children and parents, but also the families we choose.  The message is that your family members can be whomever you want them to be.  When you face adversity, that family is who you choose to surround yourself with to uplift you and support you and empower you.

Watching the episodes in which the parents are possessed by Jonah’s family, it is clear the actors playing their respective roles are having an absolute blast.  Ishibashi is doing great work right now as Tina, who is possessed by Jonah’s presumably teenage daughter and, in a complete departure from Tina’s usual stoic, hardened exterior, is quickly adapting to teen culture, from taking selfies to questioning each of her parents’ commands with an eyeroll.  Also noteworthy is Brigid Brannagh in dual roles as frantic and quick-witted scientist Stacey Yorkes and Jonah’s wife, a statuesque and ruthless queen.

Beginning with the pilot, the directing of each episode has been top-notch.  Parallel tones were set at the start between the worlds of the Runaways and Pride.  Reflecting the reality of their lives, the Runaways’ scenes have felt frantic and fast-paced due to the handheld cameras used, while Pride’s were shot much more statically and cinematically, giving them a much more stylized feel.  My one gripe since season one has been the slower pacing of the storylines.  That is likely due to the massive cast of characters the writers are juggling and the many relationships and plotlines that are trying to be balanced.

I have to admit that I was hesitant to binge through the final episodes of Marvel’s Runaways because we’ve known for about a month now that this third season would be its last.  With its reputation of ending each season on a massive cliffhanger, stranding fans in shock and leaving us wanting more, I was worried that the series wouldn’t get its proper sendoff into the Marvel Television graveyard, joining the likes of the cancelled Daredevil, Jessica Jones and others.  But the writing team and cast did a wonderful job giving the show a proper goodbye, despite a few loose ends, particularly those involving future crossovers set up with Freeform’s Cloak & Dagger, which was also cancelled earlier this year.  The crossover episode with the stars of Cloak & Daggerwas brilliantly handled, setting up great “bro” chemistry between Tyrone’s Cloak, played by Aubrey Omari Joseph, and Sulkin’s Chase, as well as seeing the two teams work together in such a cohesive and organic way.  Some crossovers in the superhero TV genre in the past have felt rather forced, but this was a major exception.  It does break my heart a bit that we won’t get to see this happen again.

All good things must come to an end, but this is Marvel that we’re talking about, so I fully expect all the characters in its cancelled television properties to return somewhere, somehow, in some form, and continue their adventures.  Maybe on Disney+ or (I hope) on Hulu, where those stories can be as daring and dramatic as they need to be.

All three seasons of Marvel’s Runaways are currently streaming on Hulu.